At NJCon15 last year, I found a quiet corner outside the main convention hall where a number of people were playing a skirmish game called "Saga". I'd heard of it, and have always wanted to get into dark ages but never got into it.. Until now. The guy in charge was very nice and we played a 4 point demo game. Then I started watching the History Channel show "Vikings", as well as the BBC show "The Last Kingdom", which is a bit better since its based on the Bernard Cromwell Books. Started reading those too.. Excellent subway reading.

Saga itself is actually quite easy. You roll dice, and place these dice on a "battle board" which allows you to activate units and buff your guys, or debuff your opponents. There's "Fatigue" in which your guys get tired, and your opponent gets to "spend" this fatigue to do more things (or prevent your guys from doing things).  An ingenious system.

So I went and bought 2 Crusader Miniatures armies for Saga; a Viking 4 point force, and an Anglo Saxon 4 point force.  http://www.crusaderminiatures.com/list.php?cat=4&page=1

4 points means you have 4 units, and the size of the unit depends on what it is. There are only 3 types of units in the game, Hirthguard (elites), Warriors (normal), and Levies (crap), and 1 point will buy one of these units. 1 point will buy 4 Hirthguard, 8 warriors, or 12 levies, so it evens out. Each faction has it own special weapon that you can give to a unit.  The vikings for example get to have one of their elite units be "berserkers", so they get more attack dice, but less defense. You can also get mounted troops, Dane Axes, slings, and a few other things. The main meat of a faction is in the battle boards which are unique to the faction, and give each of them their flavor. You also get a warlord for free, and if he dies, game over.

Ok, enough rules review (there are plenty online anyway). I just finished painting up all the hirthguard for both my vikings, and their anglo saxon opponents. Technically Anglo Saxons and Anglo Danes by this point looked pretty much the same (everybody's got a huge colorful shield and was hairy), so they could port to that too, which is a nice 2 for 1. The Vikings meanwhile can pass as Jomsvikings so again a good 2 for 1 faction.

Anyway, here are the figs. I used Little Big Men Studios (http://www.littlebigmenstudios.com/catalog/) transfers for the shields since they look fantastic, and I didn't want to have to paint them myself, memories of WFB Savage Orcs and Bretonians from my past come to mind. To differentiate them, the Saxons have no iron rim on their shields, and the Vikings will all have a rim. I figured its a good subtle difference that will show. I *might* put a red dot on the Vikings' bases. We'll see. 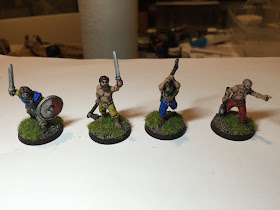 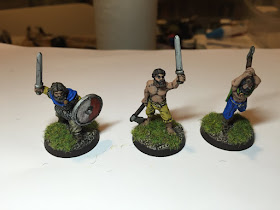 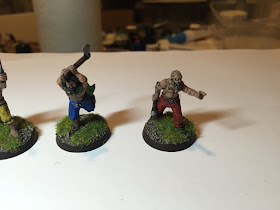 Then the Viking Hirthguard with 2 handed axes: 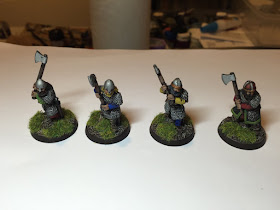 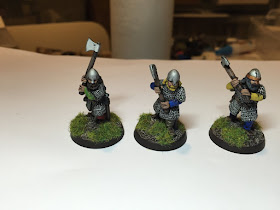 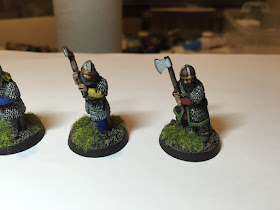 And finally the Anglo Saxons with their dane axes (and slung shields): 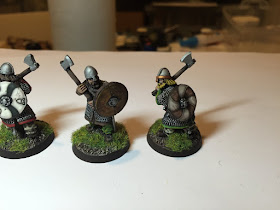 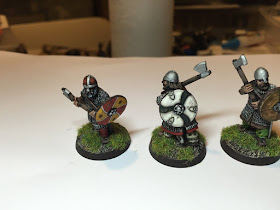 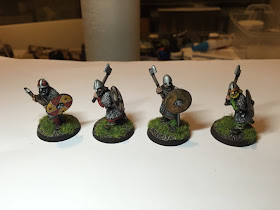