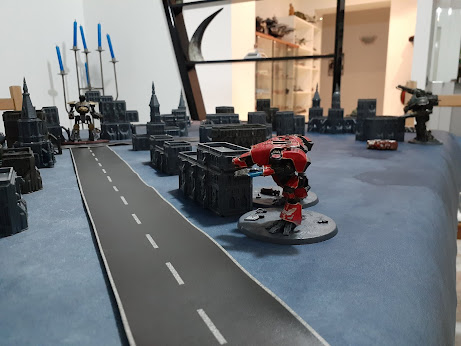 This was my first real game of Adeptus Titanicus, my friend Chris and I each made 1500 point Battle Groups.  We simplified force building, no legions or maniples although mine are painted as the War Griffons, and it would have fit into a core maniple.  This meant no special rules were used for legions or maniples. Chris got a random stratagem card since he was a few less points (40), and both precepts got a roll on the special ability table. We also played with the Optional Rules from the core book as I really wanted to destroy buildings. 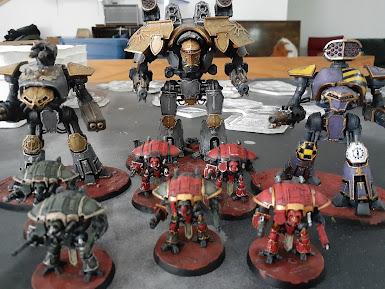 Essentially we just picked the titans and weapons we had (Chris had way more choices than I J).  My Battle Group was led by a Precept Warlord, 2 Reavers, and 2 banners or Questoris Knights. For the first game I wanted as much “what you see is what you get” (WUSWUG) as possible so the warlord was kitted out with two bellicose volcano cannons and the rocket pods. Luckily I had more choice for the Reavers. The War Griffon was set up for medium to close range with a Gatling blaster and melta-gun on the arms and a twin laser on the top.  The other Reaver was kitted out for long and medium range with a volcano canon and triple laser on the arms and a rocket pod on the top.  The six knights were broken into two banners.  A group of four (maximize ion shield) to act as a screen for the warlord and a group of two to provide some freedom of activation for the titans. Their weapons were as you see except the Avenger Cannons were used as Battle Cannons because avenger Gatling cannons are garbage since they don’t strip voids

Chris’s maniple was a lighter force consisting of a Warbringer Nemesis precept, 4 Warhounds and one Acastus knight.  While this could have been six activations he made a squadron from two of the hounds to maximize his flanking stratagem.  Essentially his build was similar to mine in that the bulk of his titans would advance under the cover of his precept providing fire support. 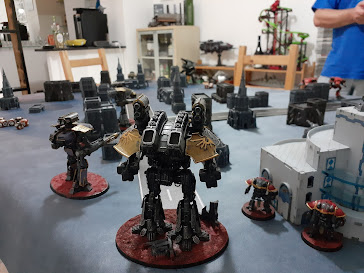 Setup.  I rolled the initiative and set up the first unit. Immediately the advantage of two banners became apparent. By placing them first and second (about the 1/3rd – 1/3rd portion of my deployment zone) I was able to place my first titan after his while keeping the initiative.  This combined with the fact that two of his hounds were off flanking, meant that I actually got to place my Warlord last and in the best place possible to maximize it long range weapons. Chris deployed his Nemesis and Acastus in a corner (that I avoided) and his other two hounds (red) on the other side (that I concentrated on). 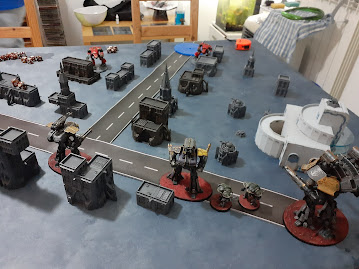 1st turn saw orders being received by all the titans, the fog of war had not settled in yet.  I will only mention the first fire order for the Warlord.  This order seems, to me, to be the choice for any titan equipped for long range and set up in a good spot.  In effect the ability to fire one weapon during movement increase the damage output for the titan by 33%.... that is crazy if you think about it.  Otherwise my Reavers lumbered forward and my knights moved to the right flank to screen/guard against the out flanking war hounds that had been spotted on the long range sensors and would arrive on the second turn.  Shooting was largely ineffective for me, his hounds were cowering behind the buildings.  But Chris managed to smash some voids off my left most Reaver, dam that Acastus Knight.  Luckily his precept in the Nemesis got tucked in too close to the buildings and could not find any targets except with the Quake Cannon in his left arm. 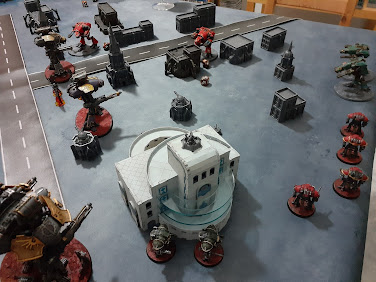 On Turn 2 the gap was closed considerably by the Red Dogs, and the Green Dogs came in on the flank.  Luckily the Green Dogs were put off by the 6 knights waiting for them and did not push into my warlords blind spot, they could have.  Shooting this turn was balanced with voids absorbing most of the impact but some shots did get through and caused structural damage to Reavers and the Red Dogs.  I was lucky that his Nemesis was still having a heck of a time finding targets, partially due to my Reaver hiding behind a spire of a church and partially due to the restrictive arc of the Bellicose Cannon J Again the first fire order for the warlord was handy as it allowed a volcano cannon to annihilate a building opening up shots on the lead Red Dog in the shooting phase. 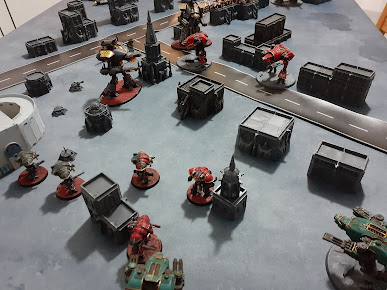 Turn 3 saw the Red Dogs and Reavers mixing it up with some near misses and some critical hits. If it wasn’t for some voids getting activated in the repair phase there would likely have been some smoldering Reavers on this turn.  That said both Red Dogs had critical damage all over their bodies and were hurting little puppies.  The brave knight banners had intercepted the Green Dogs and while they did take damage from the Warhounds they provided enough of a distraction to keep the Reavers safe.  The Warlord had had enough of the Acustus knight and dropped two volcano cannons onto it, instantly turning it into slag.

We played for about two and a half hours, including setup, and put the battle on hold here.  That said I do think that the game was going very quickly for turns two and three, once we got the hang of it. 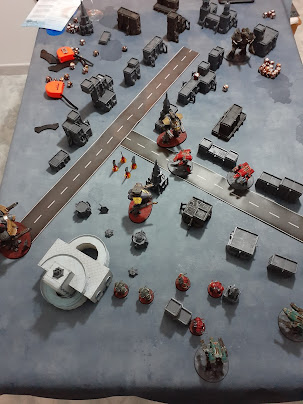 End of Turn 3, photo was taken as insurance against Chris medaling while I was gone J

Thoughts….. Adeptus Titanicus is a very fun game that I believe will go quickly once you get the hang of the rules.  If I had to pick an issue with the rules it would be to hit modifiers with cover. Why does a warlord obscured from just above the waist to the ground have a -2 to hit and a knight in the open have no modifiers to hit, the knight is about a third the size of the exposed part of the warlord.  Perhaps the whole banner should be considered a target so if you can only see one knight the banner benefits from cover (this could get abused easily), or maybe the game needs a standard size target (like infinity) and if you can see all of standard target you are good to shoot without modifiers…

The Warlord weapon mix, although being the default, is fine even with two draining weapons.  Since it was the last model placed it started in an ideal location and pushing the reactor was not an issue.   In addition the precept skill was the one to make it agile and get a free turn before shooting (with -1 to hit). Also first fire orders to give a 50 point weapon a second shot will make your opponent cry.

Activation order.  This is a factor from setup to end game.  My side had 5 activations while Chris began with 5 (technically) but only had 5 activation on turn 2, by turn 3 the Acustus Knight had been vaporized and the flanking hounds were not in play on turn 1.  Having activation superiority is very valuable as it lets you charge last, or walk away since you don’t get locked into melee.  It also allows you to get one titan lined up perfect each turn.

Smoke!!  Adeptus Titanicus must be played with something to show the damage on titans (cotton balls or something). The game itself is more of a team boxing match than a shootout.  Titans can take a lot of punishment and it becomes a little tricky to remember who has been damaged, it will also look so thematic.  We are totally doing that next time……

As always let me know if I made a mistake, thanks for reading.