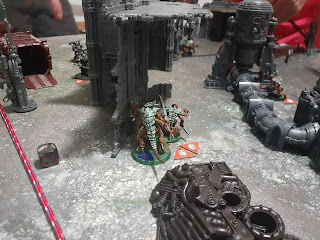 On a bit of a role with Kill Team and I am enjoying it quite a bit.  This was our third game of kill team and as such we are still learning the game, although we think we only got one rule wrong (the first cultist activated as a group of one not two).  One thing I am learning is that there is a reasonable amount of tactical thinking required to be a successful commander if you don’t just want to rely on the dice gods (who were very present this game).  In this game placement and control of the objectives were significant factors, some would say less significant than the dice but I digress J 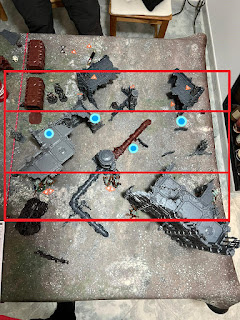 The scenario for Game 3 was the basic Control the Kill Zone scenario, we played this because we had a new player in the game and wanted to start with a scenario that us grizzled veterans already knew.  This scenario relies on the placement of 4 objectives, two are placed on the center line and the other two have more freedom.  In the deployment photo you can see the position of the objectives and how they favor the Chaos deployment zone.  The reasoning for the Tyranid player to place the right most objective where they did was to have it in a bit of cover (Oh we also set up the scenery before the objectives, so two mistakes...). 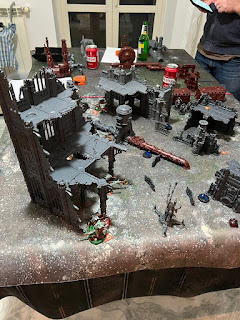 Turning Point One, Grab and Go.  Chaos won the initiative and their leader used his 3 APL very wisely to move to and secure an objective through a window before dashing back out of sight (the left objective). After that both sides advanced on each other but the right most objective was too far away to be secured by the Tyranids and the Kill Zone was controlled by Chaos at the end of the Turning Point. 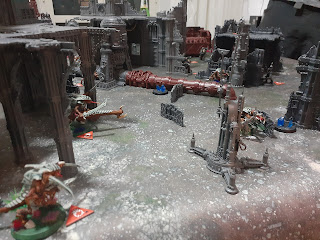 Turning Point 2, Burn them Down.  Again the initiative was won by Chaos and the Chaos Marine Gunner with the plasma gun proved very effective at injuring large monsters.  The Tyranids and Geenstealers did their fair share of killing in close combat but even in victory they were wounded and then able to be mopped up by the lasgun snipers from their vantage points or the two Cultist Gunners with flamers. The Chaos dice were hot but the Chaos stratagems of let the galaxy burn (easier critical hits) and warp infused (lets the marines ignore penalties for being injured) also proved very effective. 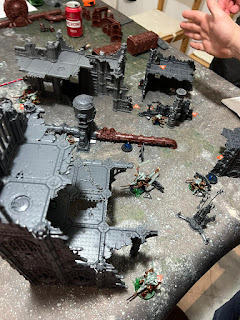 Turning Point 3, all is quiet.  By this point the Tyranids had largely been crushed and they had not scored enough victory points. The kill Zone was firmly in the hands of Chaos and the game was called with a 6 to nothing victory for them. 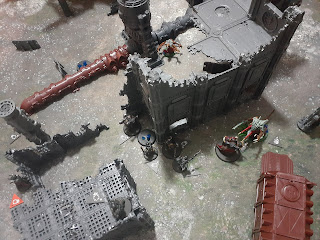 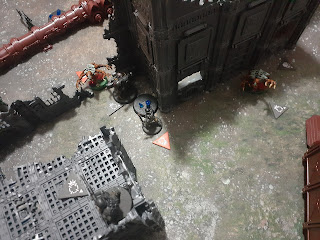 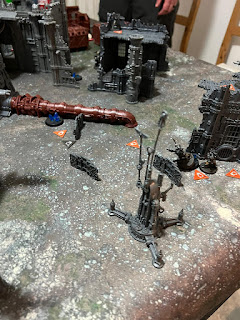 What Chaos did right!  Well other than having hot dice I think they did a good job organizing their 11 models into smaller teams to take and hold three objectives.  Also the group activation of 2 allowing the activation of both flamer gunners was a headache for the Tyranids as they tried to get into engagement range.

Ultimately it was the setup that probably did the Tyranids in.  They suffered from not having a close objective they could lurk around. This meant that it was easier for Chaos to control the majority of the objectives.  In hindsight the barricades could have been used to provide enough cover to defend an objective in the open and closer to the Tyranid deployment area

Principles of Kill Team.  This is a work in progress but this is where I will try and direct my thoughts for the next battle.

Deploy the objectives and set up the terrain with the advantages of your Kill Team in mind.