Here is a battle report/review of my first game of epic. Generally speaking I think that epic is now my preferred format for X-Wing. It feels much more interesting, both tactically and thematically The only advantage the competitive format has is that it takes less time to play. While moving the ships has been made very quick, thanks to the wing tool, there are a lot more dice rolls and squadron/card management (not so bad really). In this report I had to proxy some ship cards (interceptors) and ships (TIE bomber for a gunboat). The battle report is 500 points a side straight up fight, no mission. In this battle the Empire have found a rebel resupply location and jumped-in to intercept them. The C-ROC is on the side of the rebels. The board was about 4 feet by 5 feet. 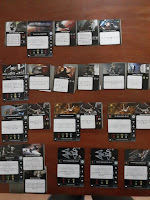 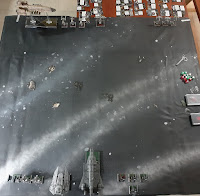 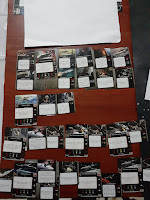 The Empire deployed with the intent of jousting the C-ROC. The rebels deployed as a group except the X-Wing squadron on their flank, their primary target was either going to be the decimator or imperial cruiser (the decimator was the most points). Interestingly with the CROC set up along its friendly edge banking one right makes it fish tail off the board (we didn't remove it and let it dangle for a turn). 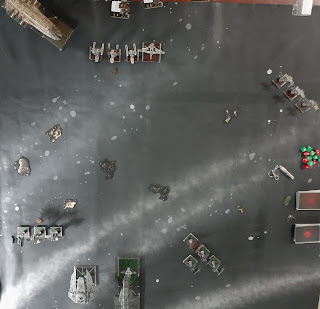 Turn 1. The rebels move slowly forward with the Empire sending the interceptors after the X-Wings and the squadron of gunboats quickly slamming up the other flank. 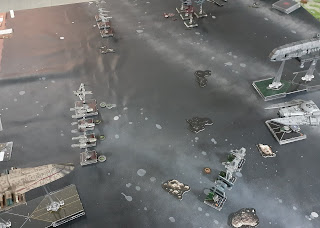 Turn 2. The interceptors (they moved before the X-Wings) continued to advance too quickly. At the end of the movement phase they were stressed and at range three of the X-Wings, which resulted in three proton torpedoes into their their leader Soontir, who was saved because of his veteran wing leader ability. That ability probably saved all of the aces on both sides, but also revealed a huge opportunities for concussion missiles (in epic concussion missiles might be better than proton torpedoes). On the other flank the imperial gunboats slammed though the asteroid field showing great manoeuvrability. The wing rules allow the wing-men to effectively fly over obstacles with no effect. Sadly, they also out-paced their support ships leaving them to face the first shots from the C-ROC alone. The CROC build allows 4 shots at range three with only spending one energy and one calculate... seems very good for the 115 points. 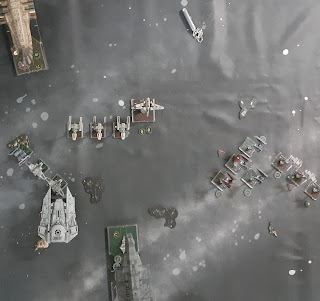 Turn 3. After their initial joust both the X-Wings and interceptors flew past each other to engage their intended targets. The X-Wing would be out of range but the interceptors managed to target the Arc killing it by turn 4. The rest of the ships smashed away at each other with the imperial cruiser taking a huge beating, and unable to return much fire, I messed up with my manoeuvre and was still not close enough for the point defense battery My intent was to use the title to add free “eye” results and then convert them to hits with calculates and focus. This didn't work because once the cruiser started taking damage its green tokens were routinely stripped away. 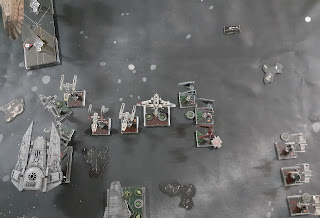 Turn 4. Was the heart of the fur ball with all ships getting into range with each other. The gunboats had totally missed their approach on the CROC and that cruiser only took minimal damage. The same could not be said for the imperial cruiser who was badly damaged by the collective bombardment of the rebels, notably the remaining proton torpedoes on the X-Wings. 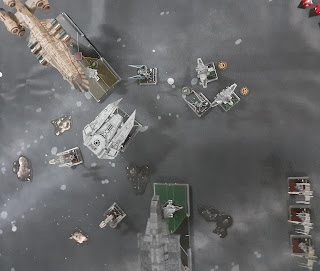 Turn 5. Interestingly the fur-ball thinned out pretty quick and did not become a parking lot. One interceptor was run over by the CROC but wasn't destroyed and the Imperial Cruiser was finished off before it had a chance to fire that turn. 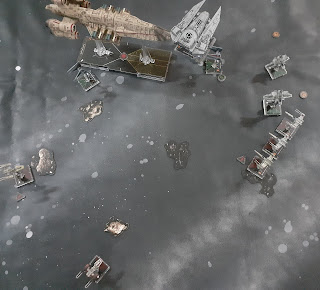 Turn 6. was played but not much happened and the Imperials conceded to the rebels. I didn't have a watch but the game took probably two hours once set up was complete.

Conclusion. I think the Imperial plan was executed poorly. Both of its wings that it was going to flank with missed their lines or misjudged their ranges. Played again I think it could easily have gone the other way. Veteran wing leader is the upgrade with the best value for cost. But the most fun part about epic is commanding the huge ships. The huge ships play very differently from little fighters, as you would expect. Managing their systems seems thematically correct and adds a whole new layer to the game. However, it does seem the most powerful element is the wing. I suspect multiple 3 ship wings led by aces with veteran leader and swarm tactics will prove to be the optimal build.

Awesome battle report! Where do you find the rules for the epic format? I think the kids and I would have way more fun with this format.

They released them last October. Not sure if the pdf is online yet

Did you realize there is a 12 word sentence you can communicate to your partner... that will induce intense emotions of love and impulsive attraction to you deep inside his heart?

That's because deep inside these 12 words is a "secret signal" that fuels a man's impulse to love, treasure and guard you with all his heart...

This impulse is so built-in to a man's mind that it will make him try harder than before to love and admire you.

Matter of fact, triggering this influential impulse is absolutely binding to getting the best ever relationship with your man that the instance you send your man one of these "Secret Signals"...

...You will instantly notice him expose his mind and soul to you in a way he haven't expressed before and he will see you as the one and only woman in the world who has ever truly appealed to him.