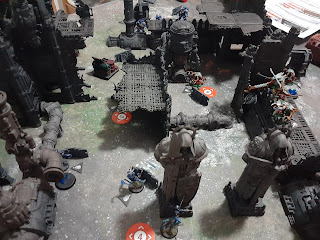 So what do you do when an odd number of people show up to game night?  You play three player Kill Team, that’s what!  Thanks to the alternating action system of the new kill team it actually works quite well.  The only strange situation that came up was how to activate overwatch, but even that worked out. 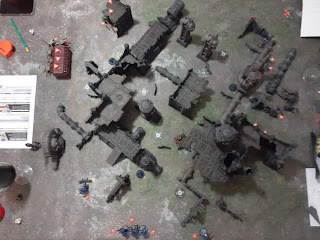 The scenario we played was Master the Terminals.  In this scenario you get points for controlling a terminal and you get more points if the terminal has been disconnected from its two firewalls.  We chose this scenario because it was easy to modify the objective locations to add a third terminal and corresponding firewalls.  Once the objectives were placed we all took turns adding scenery and then rolled off to select deployment zones.  Deployment was no closer than 6” to an objective marker and no further than “12 from your chosen terminal.  This rule was okay but we also had a “don’t be cheesy” clause (I am not sure three players would work in a competitive gameJ).  After that the person who chose the first terminal deployed a complete fire team, or half of kill team if they only had one fire team. Then we went around with each player deploying half of their kill team until all the operatives were deployed. 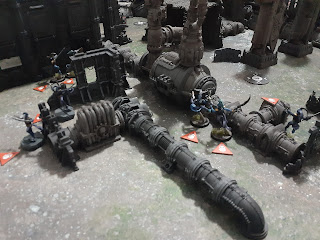 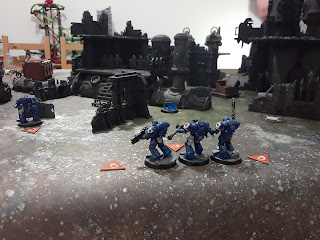 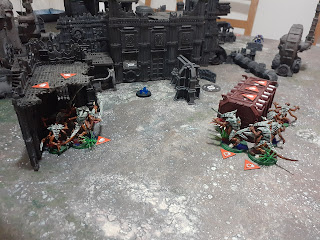 After that the game ran pretty much like a normal game with an initiative roll at the beginning of each turning point determining activation order. Overwatch was allowed if a kill team had no more actions and at least one other kill team had operatives to activate.  Interestingly this didn’t happen all that often and I don’t think anyone felt it was unfair. 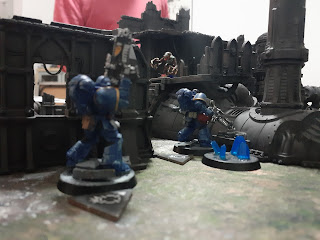 Turning Point 1 (T3, M2, H3). Both the Harlequins and Tyranids made use of their superior mobility to disconnect two fire walls while the marines only disconnected one.  Otherwise there was no shooting in the first turning point as the marines were being very defensive and the other two kill teams were assigned conceal orders.

Turning Point 2 (T7, M5, H6).  This turn got bloody with Tyranids and Harlequins put some pressure on the marines who stay in their deployment zone, but did lose two marines to the combined attack.  Both the Tyranids and Harlequins suffered losses attacking the marines and even more when they fought each other in the center. One harlequin did reestablish a firewall around the Tyranid terminal but they are quickly destroyed and the firewall again disconnected by the Tyranids. 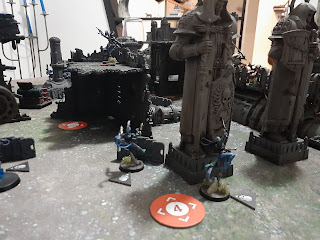 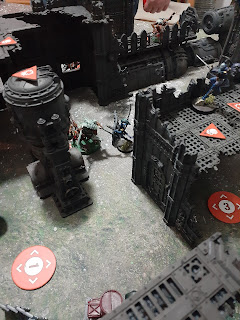 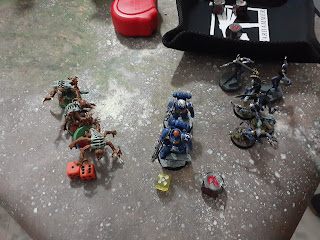 Turning Point 3 (T9, M7, H8). More fighting but this time the Tyranids and Harlequins give up on the marines and concentrate on each other in the center incapacitating many operatives. There was one moment where a Harlequin with shuriken pistol and kiss charged a wounded Tyranid warrior in close combat and then blasted a Genestealer all without taking a wound.  That operative was then blasted by a venom cannon but they got the point across. 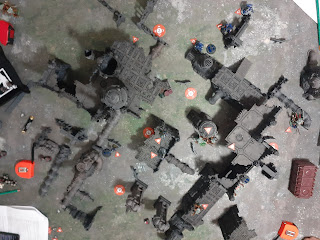 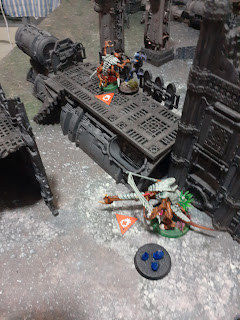 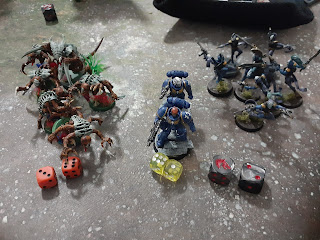 Turning Point 4 (T10, M9, H10).  By this point the Harlequins are exhausted and with one operative remaining decide to defend their own terminal.  The marines are too far back on points to win but play the spoiler to reestablish a Tyranid firewall and the game ends in tie between the Xenos, Better luck next time Emperor of Man. 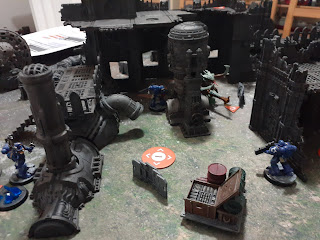 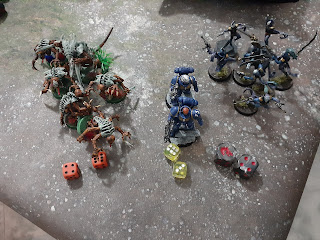 So the game ended very close and everyone had fun, so I guess that is a win. Maybe it would benefit from Tac Ops cards for a few more options for gaining victory points. Certainly adding a bit of complexity would not hurt the speed, this game played in about the same time as a normal Kill Team game.
I think clearly the Harlequins were overly aggressive and it was the first time the list was being used but their maneuverability really showed its worth and their 3 victory points in the first turn kept them ahead of the marines.


The marines were perhaps too timid, but with a smaller kill Team they did not want to loose operatives without a compensation in victory points.

The Tyranids played well, they kept their eye on the victory points and were given a bit of a blessing from the harlequins when they reestablished the firewall which allowed them to disconnect it again and score some more points. 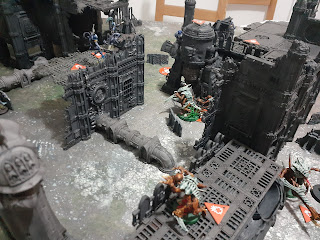