Yesterday my good friend introduced me to a skirmish game called Dead Man's Hand.  I found it to be a fast paced and engaging game.  It has a very thematic Wild West setting, that pits rival gangs against each other in situations reminiscent of your favorite western.  Thanks in part to all the great scenery my friend has (but hasn't painted :) ), it is very easy to imagine your gang members crashing through saloon windows or unloading their shot guns at point blank range, and the random activation using playing cards are great! 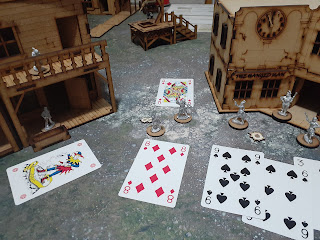 The main mechanic I had not seen before is the random activation of the models.  At the start of each turn one card is drawn by each player and then assigned to one gang member face down, the rest of the gang members are dealt face down cards.  The cards then get flipped and the gang member assigned the highest card gets to activate first.  Activation is easy, choose three; move, shoot, aim, reload (clear a jam), charge, heal?,  etc.. It is a very fast mechanic and after the first turn I was off and running.  Between each turn there is also a random western themed event. like distractions form the saloon, creates of money, or grumpy sheriffs.
In the first game, my group of Apaches were rescuing a friend who had been sent to the gallows, while my opponent was the gang that brought in the guilty party and was determined to see justice served.  We finished it in about an hour and then my warriors were onto their second mission of busting a friend out of jail. Which raises the question, who were these Apaches hanging out with? 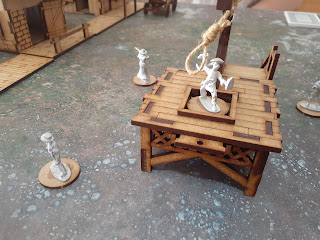 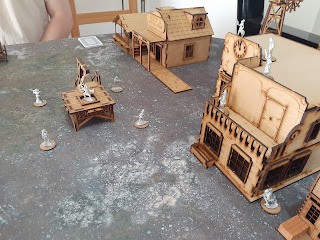 If I were to have a critique, I would say that in the basic rules that we played variance was a big factor and there was little a player could do to mitigate a bad roll.  It is my understanding that if you play with the actual playing cards designed for the game then there are special rules written on each card (some cards are kept in your hand) and these special rules can modify the dice.
Anyway, shooting is done with a D20 and fighting is done by comparing D10 rolls of the attacker and defender.  There are ways to modify the rolls, so aiming gives you a plus one, every shot after the first is a minus one (this is cumulative), each "wound" that a player has is a minus one. So on occasion the modifiers do add up, but often it is a 50/50 chance of success, which is fine but it did feel a little fluky in the two games we played. 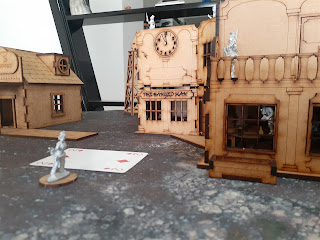 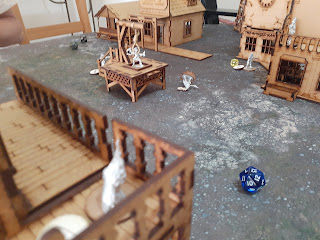 Something that this game did have some of but could have more of, is interacting with terrain or bodies of gang members.  I think it would be really cool if you could grab an improvised weapon if fighting in a saloon or take the Winchester from the limp body of a deputy.  Since the basic mechanics are so elegant I really think this would be easy to incorporate. After all you do track shots and have to reload, this doesn't slow the game down at all. 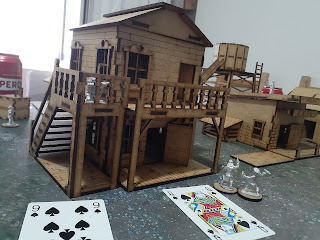 The next day my kids ask if we could invent a board game, and I decided to try and mimic Dead Man's Hand.  It turned out to be very easy and fun for the kids (11 and under).  We found some toys from the computer game "Among Us" and set up a space ship with card board buildings from an old infinity starter set.  The Among Us models worked great, they were approximately 28 mm and they were also stamps!! To keep track of the damage and equipment of each crew member we used a sheet of paper that the kids wrote their character's names on and stamped them so we wouldn't forget.  During the game they also drew skulls on the character sheets to track damage.  In the game each team of three had to run around the spaceship doing tasks, but could also shoot at each other if they got close enough.
the kids seemed to enjoy the game.  I think they really liked the fast pace, dealing the cards to their crew mates and especially drawing on their character sheets. 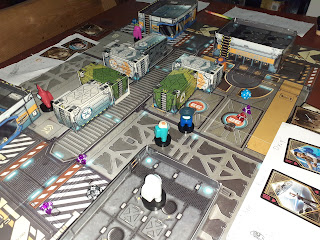