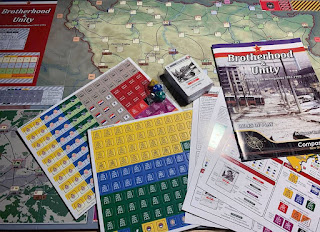 Hello readers, it has been a while since my last post.  I must say that having any readers at all makes me feel quite special, so thank you.  It is too bad I don’t know how to turn on comments but I don’t think I am actually the administrator to this blog.  Someone just gave me a key a while ago and forgot to change the locks… Anyway, since my last post I have moved houses and in fact moved countries.  Luckily I know people in my new town so I have another group to play with.  They are more board gamers than miniature gamers but I suspect some of them can be turned!

About a week ago we played a board game called Brotherhood and Unity.  It is a classic style cardboard units on a hex map (there are no hexes but operational objectives) game, perhaps a great uncle of the miniature games I now enjoy. As you can guess from the photos it is about the war that broke up the former Yugoslavia, focusing on Bosnia.  And that is the reason for this post.  I will review the game, which does have cool mechanics and historic value, but I really want to think about how I should play games that actually represent human suffering and, in this case, documented war crimes. 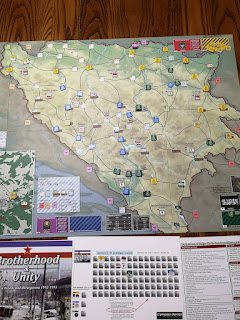 So, about those mechanics….  At its core this is an area control war game, expanding your control increases your victory points.  At the end of the game victory points are modified by the different nation’s special rules and the winner is the player with the most points.  All of the units on the map represent military units.  They each have a combat power, defensive value, and road move value.  The combat mechanic is simple, units that are going to engage in battle may move one location, think of it as a tactical move and not an administrative road move, then combat values of both the attackers and defenders are summed and each player roles a die and adds terrain effects which determines the combat multiplier that is then multiplied by the combat value (sounds complicated but if you can multiply by 1.5 you will do fine J). This final value represents the total damage inflicted, the enemy then subtracts the defensive value of one of its units (this unit is damaged and then flipped or removed).  This process is repeated until the combat value is too small to subtract a whole defensive value. To be honest I like it, it plays fast and has sufficient granularity for the operational level.  It also means that, often, when small groups fight each other nothing happens.  Combat is spiced up a bit by a nation specific hand of cards that each player gets.

Bigger picture, the game has four “Turns” each turn the players get a new hand of cards and new nation specific special rules.  The turns consist of the players playing their cards sequentially (which activates military units) until they are out of cards, then the next turn begins. 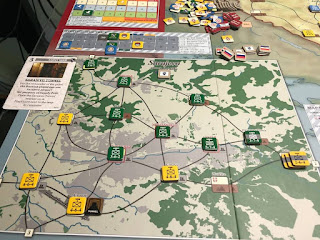 I do think the game has historic value.  The place names are accurate and the setup is a good approximation of the war in its early stages.  Also, the cards have special rules on them that represent things that actually happened, all be it in a different order. Sadly, this historic setting does provide pretty big railroads so re-play-ability is limited, if I had to guess, after ten games it would start to repeat. There is also a pan game mechanic that represents international opinion and yes the Serbs can get bombed by NATO but in the game the Croats could as well.

So back to my question.  How should I play a game like this?  Should a disclaimer be read at the beginning to all players that states this game represents an actual war and then provide some details on the war crimes that were committed by all parties to raise awareness and not minimise the human tragedy? Should the game not be played at all?  Is it okay for one player to giggle after another player attacks a UN safe zone in order to efficiently gain victory points to then be bombed by NATO because their token has reach the end of the international tolerance track? I do prefer fictitious themes, as it allows me to forget about the real world and just roll dice.