My second update for the new Tyranid Army is Brood Lord. I actually did a fair amount of converting on this guy since I want my army to be as WSYWIG as humanly possible. So I cut off his head using a pair of clippers and using green stuff I glued the plastic genestealer feeder tendrils head in its place. I then built up the green stuff around his neck to make it look like part of the model. He also has extended carapace, so I added that as well. He took about 6-8 hours in total and I am very happy with the final product. 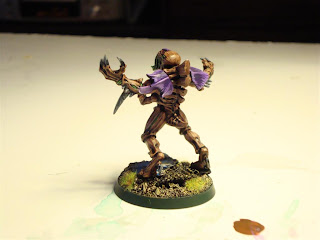 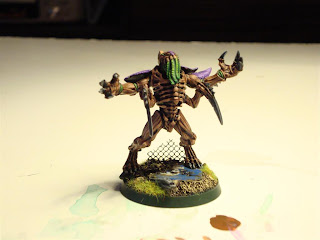 the other Kevin said...

Wow, some day I hope to put something this nice looking together in such a short time. Very nice conversion; glad to see the genestealer head works so well.

The conversion work is excellent. I also like the brown on the skin of broodlord.

I initially had two of the same pieces for his extended carapace, but I decided to go with the asymmetric look instead. I just think it is move visually interesting, kind of like a knight with pieced together armor. This of course is 100% a personal preference thing, and I am sure many will disagree with me :)