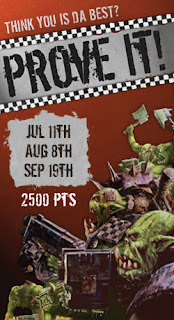 Saturday July 11 marked the beginning of this years 'Ard boyz. I played a qualifying round at the Wizards Tower in Napean and had a blast! There was 10 people that showed up to duke it out for the right to represent Ottawa at the semi-finals in Kitchener August 8th. I ended up taking my Dark Angels (RavenDeathwing). Here's what the army looked like:

Round 1 vs John and his Iron Hands
John had 6 full tactical squads with razerbacks, 3 full devastator squads and a command squad. I won the roll for first turn and took it. I deployed one Ravenwing squad and Sammuel behind cover on one side of the board. John deployed his army along the entire length of his table edge. I scout moved to within 12" and he failed to win the Inituative. From there on I was able to bring down my Terminators and roll him up. We played the full 6 turns and at the end I had 2 Objectives and more kill points, plus 3 of the other bonus points for a total of 23 Battle points. Not a bad start!

Round 2 vs Traitor Guard
There was only 2 tanks and over 200+ infantry in this army. I again won the roll to go first and did. I deployed both Ravenwing squads and Sammuel in the centre of the board behind cover. The guard decided not to deploy. I turbo boost across for scout and then at the start of my turn 3 Terminator squads came down. I ran them after moving my bikes and completely covered his table edge. Initially the ruling was that everything that wasn't outflanking was dead, but we discussed and I said that if he tank shocked then he would be able to move onto the board behind the tanks. He did and was able to get 2 tanks, 2 veteran squads with 3 plasmaguns each, 2 Pl Comd Squads with 4 flamers and his Coy Comd Squad. He managed to kill 3 bikes and 2 Terminators. They wiped him out. Marbo and his outflanking rough riders were each able to kill a unit of terminators before they were wiped out. I ended up getting full 24 points!

Round 3 vs Will Paul and his Orks
Will was running 4 Battle wagons with Thruaka, Mad Doc, Nobz in Mega armour, 20 Ard Boyz, 15 Burnaz, 20 Tank hunters, 15 Commandos with 2 Burnaz and Snikrot and 3 Def copters. He won the roll to go first and chose to do so. I however, won the roll to see who got to move first for scout moves. All the bikes raced to my flank with the intention of killing the Battle Wagon loaded with Burnaz. I made sure that I was far enough away that I wouldn't get flamed first turn. After a hard fought battle where my dice were hot (the Assault Cannon armed Terminator killed 2 Battle wagons (one on the front armour)) I managed to table Will and get another bonus point for a total of 21 Battle points.

I ended the tournament in first place with a total of 68 out of a potential 72 Battle points. So I'm heading to Kitchener for the Semi-finals against all the other winners on 8 August, wish me luck!
Posted by Big_Willie at 4:39 AM

Congratulations on the win! Proof yet again that the new Marine Codex didn't make DA obsolete; it's just a matter of running the right things. Deathwing and Doublewing aren't Scoring for Marines...

It looks like the Traitor Guard player really mucked up. He'd have been better off feeding you a couple small squads to the middle of the table, coming on turn 1 via Dawn of War and going from there. And popping 2 Battlewagons with an AC is downright amazing. That model should get some laurels or purity seals added. (Or some kill stickers...)

I took 1st local myself and am headed to Phoenix for round 2. Best of luck August 8th.