This guy isn't painted yet either, but I figured it was time to get it up and running. Some green stuff and super glue later, and here is the Tallarn Ogryn Chimera Turret.
I needed a way to show that this Chimera had my 5-6 Ogryns in it, so I thought it would look cool if the Chimera didn't have enough room for the turret mechanism so they took out the turret, piled some sandbags, and one of the Ogryns grabs the heavy flamer and uses it. Living turret! And I wanted to make a "turret" that was removable so that if this Chimera was not going to be carrying Ogyrns, we can go back to the original turret.

Anyway here he is. He's even older than the OOP Ogryns I use as my troopers. I think he's first generation! But I got him from a gaming buddy, and his goggles really work with the open top desert look. I was really close to giving him an Afrika Korps style cap, but decided the face material would be enough. The arms and hand of course had to be cut and re-glued so that they were facing the right way. Might also add in a flame thrower hose and tanks after he's properly painted. Also have to remove the heavy flamer tab that was from the Sentinal sprue that the flamer came from. The Chimera body is from the only Chimera I've fully painted so far so I wanted to show it in its glory (pre-painted) 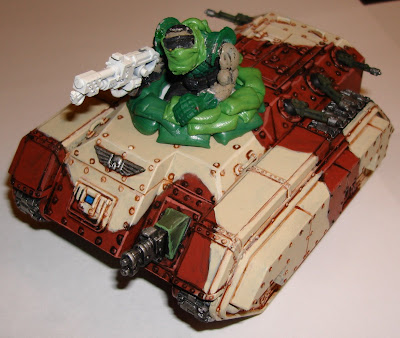 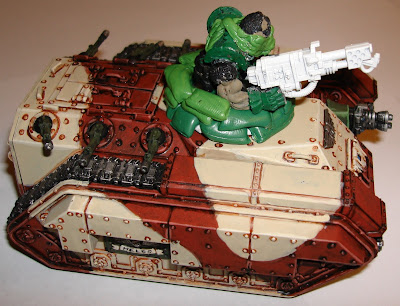 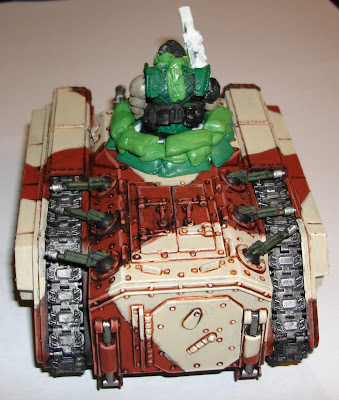 I like it! Good idea, and the Chimera looks great too.