Ghoulio once told me that Warmachine had very good mechanics as a game, and was on the whole more balanced than 40k owing to the fact that they release ALL factions at the same time (roughly). I'll add to that, that they might release the miniatures at different times, but they've already generated the stats and play tested it beforehand. They also tend not to make any of your figs "nerfed" with continuous updated codices.

That was last year, and ever since I was wondering "hmm, what IS this warmachine thingy"? Anyway my regular gaming group was interested in trying it. I read the rules and they seemed neat, so I bought the book and picked the "Protectorate of Menoth" as my faction owing to their having awesome looking "Warjacks".

The 'Jacks are basically steampowered, magic enhanced robot dreadnaughts that can do lots of damage to the infantry (and each other when buffed). That said infantry is also quite good. Menoth's advantages are they are good at denying the enemy magic, and having lots of melee buffs for their jacks and other troops. Cool stuff. Oh yes, and they are a super religious cult who loves to set stuff on fire. Awesome.

Anyway after a few games, I finally finished painting my initial battlebox. I do have several other figs to paint, but I figured I'd post the first 3 Jacks. They are from left to right, A Revenger Light Jack, a Crusader Heavy Jack, and a Repenter Light Jack. All of them are pretty sweet in combat, although the Repenter's only real claim to fame is that it has a flame thrower template weapon. Not bad, but you can do better I think with other Jacks or infantry (just wait till I finish my Deliverers. Hand held rocket launchers!). I'll have their warcaster controller guy finished soon, and then onto the only "autoinclude" of the army, The Choir of Menoth. 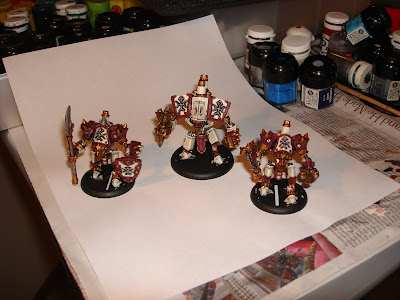 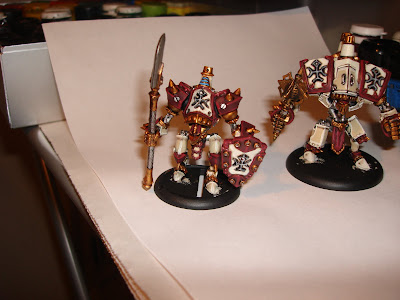 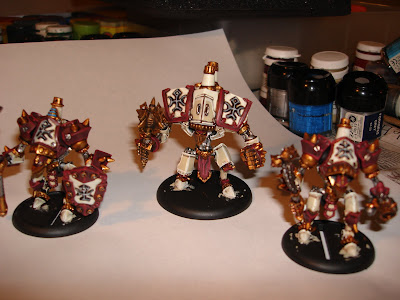 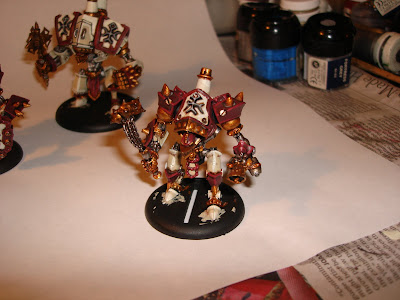 Boo! Bible Thumpers!
Haha, just kidding.
I also just recently started Warmachine, but chose Khador for my faction. After all, my name is Vladimir..

Your jacks are looking good, though! I need to paint my Black Ivan that I got a few months ago..

Khador is my buddy's force. Just out of the Battlebox, those heavies are fricken' hard to tackle with the relatively light Protectorate Jacks. They hardly need any buffing. However after you up the points level to 15, then with the Choir and Vassal, then I think it gets more even, although his snipers are pretty nice...

Choir and Vassal really help Menoth jacks perform much better than on paper. I'd recommend your next purchase after them (or even before to replace one of your current jacks) being a Reckoner who is just a great toolbox but does suck up some focus.

Looking great Greedo! Can't wait to see the rest of the force done.

Hi,
could you add Tale of Painters to your Blog List as well? Thanks :)c

Dude, those look friggin sweet. Awesome to see you trying it out...kind of want to try it out myself. Only problem I have is it is super hard to just get a game of 40k here (everyone I know is getting out of it) let alone war machine.

Very nice. My Khador force will be ready!

@Stahly, done and done. I have a Thunderhawk that is half built so I'm really looking forward to seeing how I should finish it off!

Ghoulio, I will say that WM is fairly expensive model wise, but the models are REALLY good. Easily GW quality. You generally don't need to buy that many figures for a good game which should keep the price down. Also, gamewise, its ALL about special rules. So a bit like Magic:The Gathering, each figure has some kind of special thing that it can do. It might be able to knock down opponents, push them back, freeze them, or automatically get to "boost" attacks. The interaction between the warcasters and their jacks is very well handled. And I, unlike 40k, really GET this game. I don't feel helpless when playing it, which I pretty much do with 40k. Really well done all round. I prefer the fluff of 40k, but I prefer this game. Will still have to try Tomorrow's War with my 40k stuff to see how that stacks up though.

Oh yeah, and you don't have to pull your models to pieces if you stick the wrong weapon on it... Because you don't buy those options separately.. Really nice.