Now for Something Completely Different...

...A man with a tape recorder up his nose.

Now that my Dark Eldar army is almost complete (just have a second Razorwing and the Hellions left) I felt it was time for something new. These days I am finding 40k is getting incredibly stale mostly due to how the only armies you see any more are either Marines (mostly GKs now) and some Imperial Guard. I am just not feeling 40k like I used to and I am hoping that 6th edition (with maybe a massive Errata for the Nid Dex? :D) will change that. Since 6th ed isn't coming out till the summer of next year I figured I would really change things up and try something new...

That's right, Warhammer Fantasy Ogres. For those of you who know me this is the first time I have done anything for Fantasy since 3rd edition (almost 20 years), so it is a big change for me. A friend of mine gave me the Ogre Army book, the IOB rule book and a box of ogres to get me started. I also managed to trade some stuff for an Ogre Battalion and a Thundertusk which is also really cool. My goal is to paint up 2500pts so I can get the feel of Warhammer Fantasy after being away from the game that long. I have finished up some test models and I finally hit something that I was really happy with. So here is my 3rd attempt at doing Ogres: 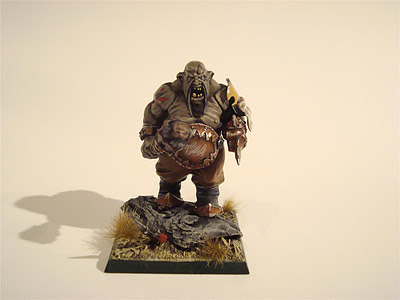 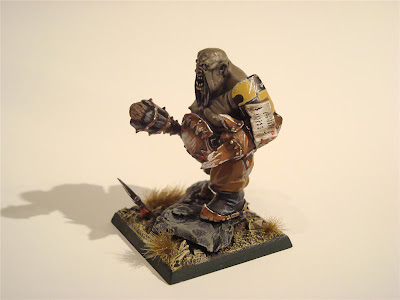 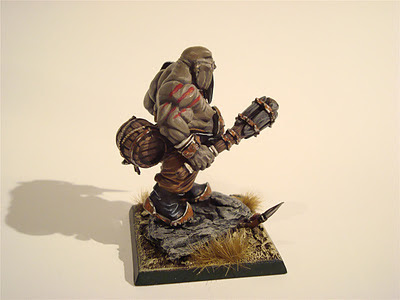 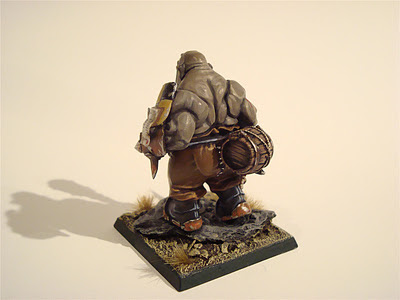 The first couple of tries I either really didn't like the skin colour (the first test model...way too much shadow grey) or I found I did too much "streaking" on the skin (similar style as my Tyranids brown colour). This one I pulled back how much I was doing with the skin and made the choice to do less as far as highlighting goes. I also plan to do a lot with extra details (its going to be an Ogre raiding party on Imperial lands, hence the shoulder shield) and scenic bases.

Let me know what you think and if there is anything you would change on this guy!
Posted by Ghoulio at 7:05 AM

Totally badass man! At least with Ogres, there aren't that many to paint so you get to concentrate on each figure!

Thanks dude. I had tonnes of fun painting this guy. In my main list (2500pts) I only have 35 models total, so for the first time ever I am going to paint them one at a time. I almost have 2 more finished and they are taking me roughly 2-3 hours each which isn't too bad. Going to post again once I have this squad finished :)

Looks great! You should rebase the ripper friends from blood bowl and use them. (Assuming you have them and they didnt stay at the store.)