Its about time, but I have FINALLY finished the Vendetta, the Ogryn Flamer Turret and the Tallarn Sentinel Scout. I'm really happy with all of them. The Vendetta took a LONG time to do, but the outcome is really good I think. Although I still have to dull coat everything (except the canopy), I figured I'd post since I can now start on the easier stuff for the Tallarn 110th Battlegroup. I didn't bother painting the other weapon loads just yet since I'm only going to use the Vendetta, but when I decide to use 'em I'll finish them off. The priority is to get everything ready in time for the tourney, and so I can start painting something else... 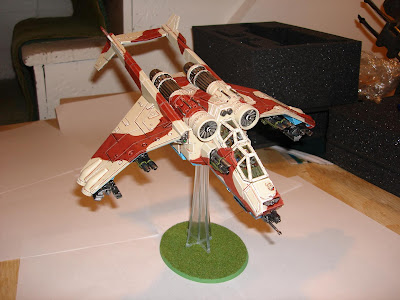 Probably the hardest part of the Vendetta was the camo scheme. I had to highlight and shade each panel by hand. Next time I'll do a spray job (when I get a spray set). Something cool to note, the canopy also has the camo scheme going up onto it. The base is a bit meh, but since it matches the rest of the army, I had to do it. When I start my Black Templar army, I'll start doing better bases. 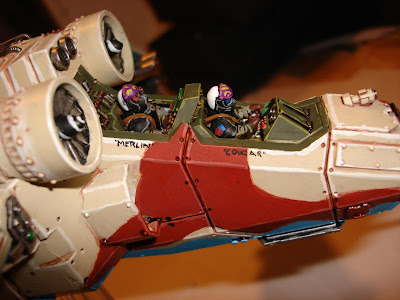 Had to give 'em the fighter pilot's helmets even if this is an Apache/Blackhawk type attack transport. And I even named them Cougar and Merlin. Maverick and Goose was just lame (and their helmet's weren't as interesting). I have removed the magnetized twin linked lascannon so you can see the names better. You can also see the screws painted onto the turbine fans to show that they are turning, although now that I think about it, they should be a blur right now..... oops. 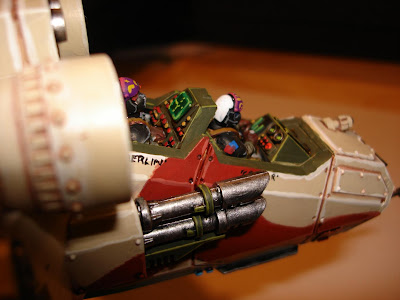 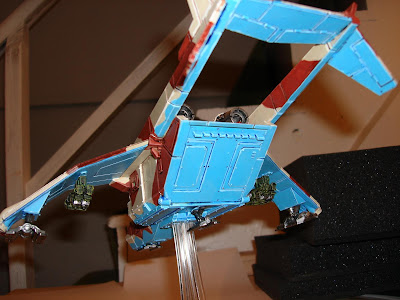 This shot gives you a good view of the underside. I felt like WW2 British fighters were the way to go, so underside=sky blue, topside=camo. Also get a good shot of the magnetized twin linked lascannons. 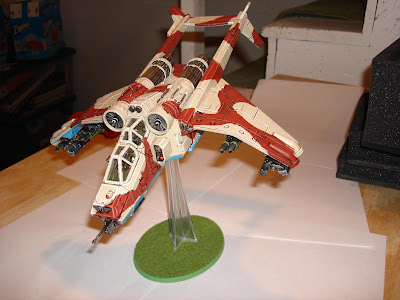 Next up is the Sentinel. Quite a nice Forge World model. So now I have 2 scouts, and 2 heavies. These guys will flank along with the Vendetta with the help of the Astropath.. 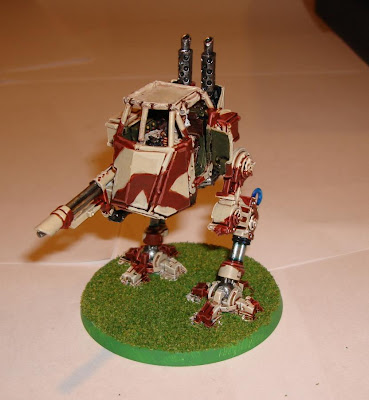 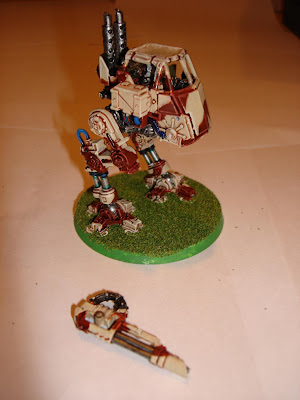 The multilaser is magnetized, so can be pulled off and replaced with a lascannon if I so choose. For now, the multilaser stays.. 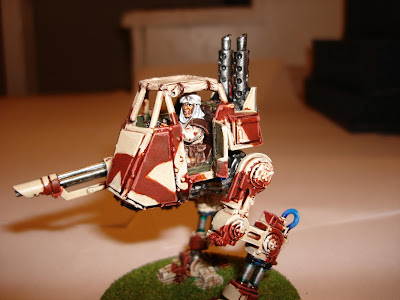 Forge World did such a nice job of the detail on the driver, that I felt it was necessary to swing his door open so you could see him better. I have no idea why the door is open... Maybe he needed a better look, or perhaps it got blown open by mistake. Either it took some very careful exacto knife work to cut it out and glue it on properly. 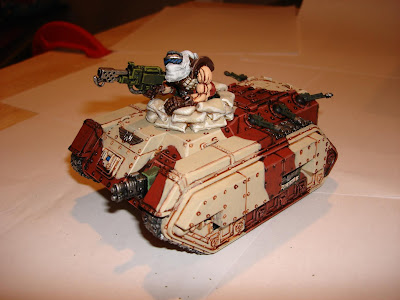 And last up is my favourite conversion, the Ogryn Heavy Flamer turret. He came out GREAT, and he can even rotate, as well as be pulled off for easy returning of the chimera to a regular vehicle. I'm still debating whether to give him a hose leading from the gun down into the Chimera, or have some kind of tank next to him, but for now he'll do. 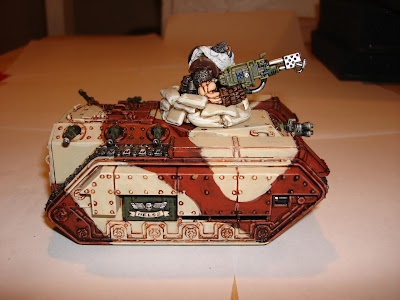 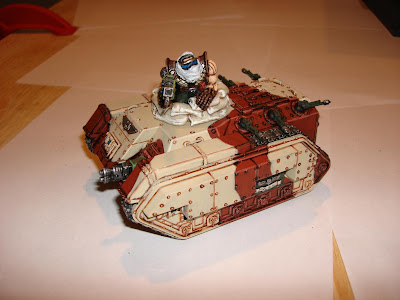 Next up will the rest of the Tallarn troopers to fill out the platoon of 30, the commissar, and the Astropath. After this lot, that should be easy...
Posted by greedo at 10:34 PM

Awesome, they all look great!

Are the Ogryn and sandbags separate or do they rotate/remove together?

They look fantastic and I love the camo scheme, especially on the Vendetta.

While I do accept your reasoning for the the bases. They don't do anything for the theme... you gotta make them more "desert". They are detracting from all the great work you have done on the models.

Keep up the good work!

SonSoft: Thanks! The Ogryn is a base that has been sandbagged, and half an Ogryn (chopped off at the knees) was stuck onto it, so the whole thing rotates together, and can be removed as a single piece.

Keith: Thank you too. Now that you mention it, the grass looks a bit silly on such a large base.... I think it might be time for the great desertification project for my whole army. Good call. Hope I don't mess the bases up!

Dude! That stuff looks awesome! I can't wait to see the whole army in the tournament. I'm really digging the look and feel, what are you thinking about doing to the bases?

I think I'll just keep it simple. Painted sand basically with a few rocks thrown in. Part of me wants to do some piled up rocks into a makeshift wall for the heavy weapon teams, but I'll leave those off for now as I can always add them later. From the first few bases I've done, this will make the army theme WAY better. What was I thinking doing green flock all those years ago?...