On December 1st there is a tournament coming up (1500pts) and after playing a bunch of test games I decided I wanted to change things up a bit. I was noticing that the regular lord in my Immortals squad was doing virtually nothing other then providing a small buff in durability and that while the Ghost Ark is awesome, that little 5 man squad just didn't have enough bodies to get it done. So, I traded out the Lord for a Transmorgification Cryptek with a Tremor Staff and a Seismic Crucible and then with the left over points I was able to add 4 more Warriors to the 5 man Warrior squad, maxing them out to fit in the Ghost Ark. The whole reason I had that Lord in with the Immortals was for some close combat support...then I realized if I can reliably make it so people can't assault me while giving me some more offensive punch it might be a better idea. How would I do that you ask? Anything I hit with the Crypteks Tremor Staff now counts as being in difficult terrain till the start of my next turn and the Seismic Crucible reduces one squad of my choice assault range by D3". So, I can reliably set up within 12" and pretty much never get charged. Awesome lol 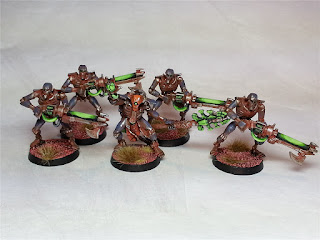 This is the first Finecast Cryptek I painted for this army and I gotta say it's going to be the last. Despite putting the staff in hot water to bend it back into place it's still warped. The detail is awful around his hand with things blending into each other (same thing with Imotek and his fire gauntlet). Ah well, lesson learned I guess lol

I am guessing anyone following the blog has noticed a real slow down with posts over the last few weeks. The reason for that is the house we are building is almost at completion and we are going to be moving in over the next 3 weeks. Right now all my Warhammer stuff is already packed up and in storage save for my Necrons and a few paints to finish these guys off for the tournament next weekend. So, that sadly means it is going to be very slow until the start of January with moving, unpacking and Christmas all back to back. On a plus note once we move I will finally have a permanent place to paint and I am going to be getting a bunch more time to actually enjoy this hobby. So come the new year and beyond there shouldn't be any more slow down in posting. I will also be starting some new stuff (I have a couple projects in mind) and I will be taking a break on the Necrons. I am really looking forward to trying out some new techniques which includes picking up an Airbrush so I can redo my Eldar in style once that codex gets released at the end of next year. I want to thank everyone who follows the blog and I look forward to getting back to it soon.

Hey I nominated you for a Liebster award