This is my second, super small Warmachine army, the Retribution of Scyrah. Basically I wanted something as different as humanly possible as my Trolls to play on Warmachine. I figured since my Trolls were all about close combat and buffing I would choose a faction that is all about ranged board control and movement shinanigans (ie moving the enemy around). So I settled on an army that is being led by Artificer Rahn who is basically a Warmachine Jedi using force punches, telekinesis as well as a magic buffing feat to crush his enemies.

The inspiration for the painting of this army is based on the Blood Elf aesthetic from World of Warcraft. So I am painting this faction with a primary colour of Red with dark brown and black leather. As with every army I painted I wanted to try out a new technique so I decided I would do a lot with Object Source Lighting (OSL from this point on) to show the magic power emanating from these guys. After finishing this model I am quite happy with it although I see a bunch of places that I can improve. The first is bumping up the high lighting on the Red specifically. I really want it to "pop", same with the blue. As for the OSL on this model this is actually my first try at it so overall I think it worked out well. I still have a bunch of work to get it down. The nice thing about this army is that in total its something like 17 models, so it shouldnt be too bad to finish. Anyways, here are the pics 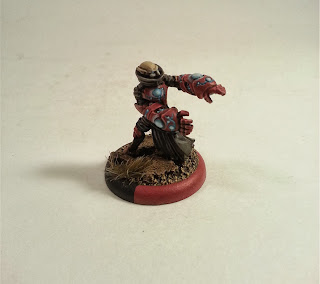 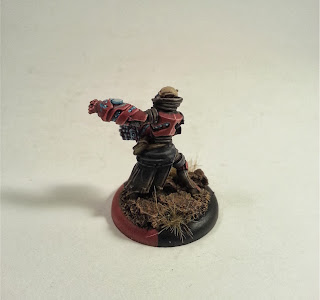