Alrighty, here is 1st update of two. I have a big tournament later today (actually, the biggest in western canada this year...almost $5000 in prizes!) so I have been putting the finishing touches on my army.

When going through the newest codex I noticed that I could either A) Get a Carnifex with venom cannon and either some small ranged weapons or a slight boost to his hand to hand...OR... B) for almost the exact same amount of points I could just get another hive tyrant who is better in EVERY WAY!!!

As you can see I opted for the 2nd Hive Tyrant. I tried some new techniques on this guy, basically the same stuff I was doing with the Trygon and I have to say that I am very happy with the results. Actually, I put the first Hive Tyrant and this guy together and they almost look like they arent even in the same army. It is pretty amazing how much better my new stuff looks in comparison to first couple of things I did for my Tyranids. That should teach me NOT to paint the center piece for an army first lol. 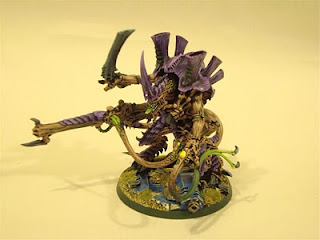 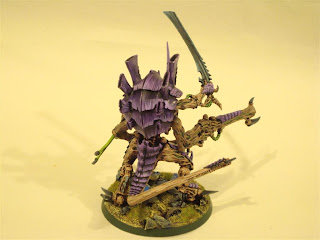 That is a great looking model. Top notch stuff!