For some reason I seem to have a fullblown addiction to painting my Tyranids. I don't know why, but every time I try and start something new, within a week I find myself painting more stupid bugs (getting close to 4000pts fully painted now). When trying to figure out what I was going to paint this week I couldnt help but pick this guy up out of my bits bin and finish converting him. In my mind I had already spent a fair amount of time and money converting him so regardless of how much he completely sucks in the game, in my mind I had to finish him.

I have done a lot of conversion work since I posted the initial stages of building on this guy. The main look I was going for on this guy was like a giant flying Ravener. In the fluff they describe him as being as big as a Trygon...but with only a toughness of 5, 4 wounds and a crappy 4+ armor save there was NO WAY I was making him that big...especially when you condsider the True Line of Sight rules for 40k. I added the wings and redid the front of his chest using green stuff. I also sculpted the entire tail except the tip (which, with the head is from the 3rd ed Hive Tyrant), the shoulders covering the wings (basically carapace extentions) as well as the bottom half of the rib cage. I am not really very good with green stuff, but I went out of my way on this guy to push myself and get practice and I think my skills are coming a long. I know in my "How to Create a Tyranid Army List" article I wrote I said to avoid the Heavy Venom Cannons like the plague. I built this guy BEFORE playing with the new book...so this is back when I though HVC's could actually do something. I was way too far into building to switch him Stranglethorn Cannons which bumbs me out. I am only going to use him in fun games so I guess it doesn't really matter :) 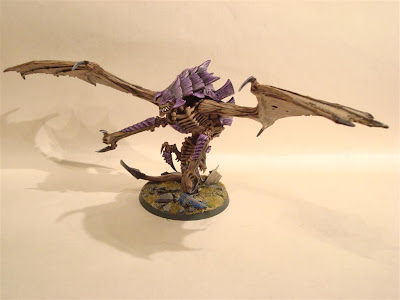 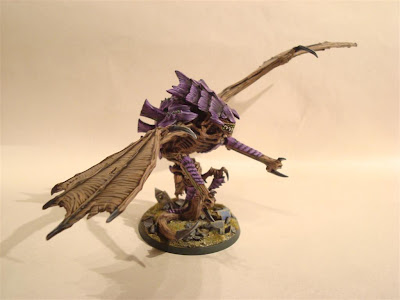 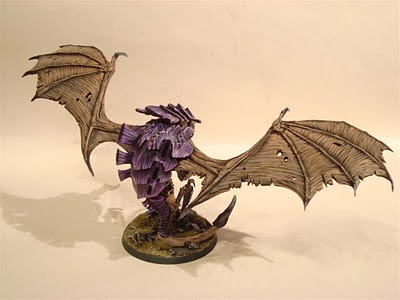 Anyways, it seems like there are almost no tournaments happening till next year since the doubles tournament was postponed :S Anyways awesome work, also liked the critique of the nid army, pretty spot on.

Thanks! Took a long time to finally finish this guy. Finally got a first game against him last night. Did what I expected he would...nothing. Although the mobility was pretty freaking sweet :)

As far as tourneys go the last one this year is being held by Kyle down at great white. It is a "team tourney", sounds really fun. One crappy thing is I can't go to Mythacon since they changed the date (I am working and I can't get it off). Ah well. Next year looks like it will have tones of tourneys, so that is sweet :)

Also are you going to be entering that painting comp at great white coming up on the 18th/19th? I think I may enter just to see everyone elses awesome paintjobs :P

Yeah, I already entered my two pieces (one large, one small). I entered in the Swarmlord and the Sanguinor. Funny thing is I am the first person to enter. Sucks that you have to be there to get the full points though as I have to work from 7am to 7pm that day :( . Ah well, not much I can do :P I would of really liked to see the other entries, hopefully some will still be there when I pick my stuff up on Tuesday :)