After almost 9 months of putting this guy off and painting everything else under the sun for this army I FINALLY got around to building him. I had many different ideas floating around in my mind and I ended up scrapping most of them and just started building with almost no game plan at all. For some reason I seem to work best when I just have a rough idea and just go where the pieces I am working with at the time take me.

For this guy I used parts from the Carnifex, Trygon and Ravener kits (his cute little rending claw arms in the front). My main goal was to make sure this guy didn't just look like a carnifex with 2 or 3 extra bits added on since that is what about 99% of the Tervigons I have seen in real life look like.

The Main body and half of the lower body including the legs are the Carnifex. The head is made from the standard Carnifex head with the lower jaw cut out and replaced with a Trygon Jaw. I also added the Trygon Mandibles and a fin on the top of her head to make it look as different as I could from the carnifex. For the main body I added the "Spine Bank" carapace on the top to be the "Cluster Spines" gun. I also added the spore cysts on the bottom to simulate where the Termagant eggs come out (and this also really beefs up his body). I like this idea a lot since almost every Tervigon I have seen has 1 or 2 tubes where the termagants come out of, which, if she is making 10-15 Termagants a turn doesnt make much sense to me. The Spore Cyst carapace piece has about 10 openings, which I really like. The lower body is the Carnifex hips which were cut halfway down and I added the Trygon bottom tail (left over from my 1st Mawloc) to give it a more impressive profile. Lastly I sculpted the entire mid section out of Green Stuff and Super Sculpy (the actual egg balls were heated Super Sculpy with green stuff for the detail work).

She is almost done, all I have left to do is finish the base, do a couple of touch ups here and there then it is finished! I gotta say it feels really good to finally get this done. Only 2 1/2 days of work lol...sigh. Ah well. Now, I just need to paint another box or so of Gants then BRING ON THE DARK ELDAR!! 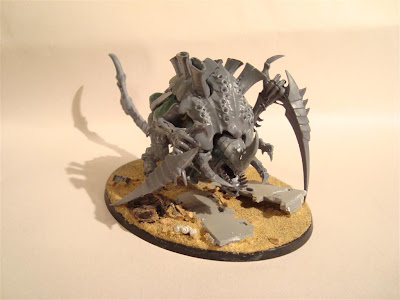 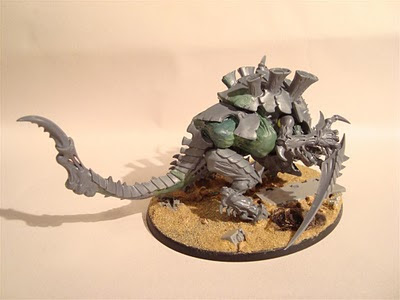 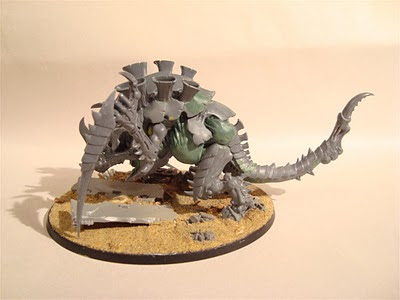 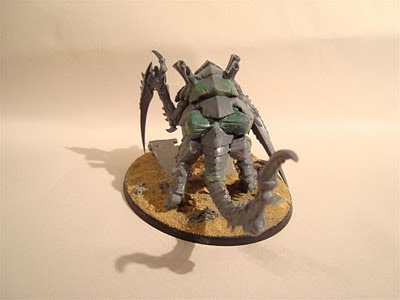 Love your tervigon ! One of best i ever seen (: