Lately all I have wanted to do is finish painting everything I own for my two main armies, Tyranids and Eldar. So, now that I have so little to paint for the nids (just the Tervigon and some termagants he will poop out) I figured I might as well really start in on the Eldar.

I have had these guys built for about 4 years now, just sitting in a plastic bag in my eldar box, so I figured it was time to get them finished. Overall I am pleased with how they turned out, although you can tell I spent my time on the bike itself and somewhat rushed the guardians riding them. The last couple of things I am going to paint up for these guys are:

- One more Scatter Laser Warwalker
- 4 more Scatter Lasers (2 to replace the two star cannons on my warwalkers and two to replace the star cannons on the vypers)
- 10 Dire Avengers. Going to go Power Sword, Shimmer shield with defend on these guys, that way I have more tactical flexibility
- Wraith Lord (new plastic one) with a Bright Lance, Missile Launcher
- Wave Serpent with twin linked Shuriken Cannons

Looks like a lot, but it really isnt too bad. I will post more as they come along :) 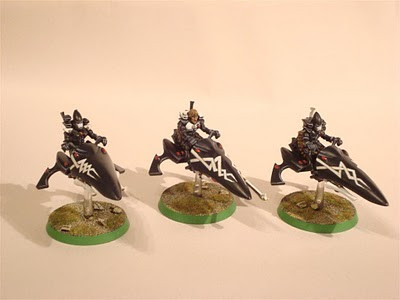 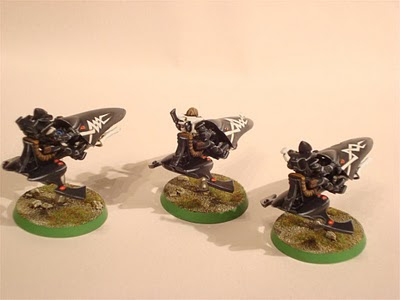 PS. Also, watch out here within the next month for some Dark Eldar previews of my new army as I am going to be dropping everything once they are released. The plan is to push what I started with the Tyranids in regards to their bases tell a story and move that into the modelling of the army itself. The army is going to be based on a small Dark Eldar warband assaulting a small Imperial Guard outpost. Should be fun! I will post some test models near the end of October along with some finished bases for the new army :)
Posted by Ghoulio at 9:21 AM

Really nice neat highlighting of the black (not an easy job), they look very sharp.