The Battle for High Pass 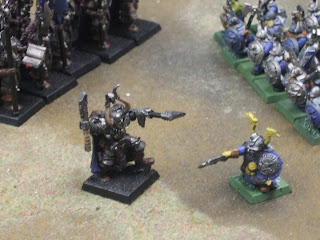 Following is the battle report for a 2000pt battle between Dwarfs and Warriors of Tzeentch. It was fought at the Ottawa GW during their Tuesday Warhammer Night . I would also like to give the staff a quick shout out as they provided awesome scenery, arbitration on the rules, and a peanut gallery ;)

The scenario for the battle was “Battle for the Pass” and the only magical scenery used was a blood forest which was avoided all game and an enchanted tomb which provided a +1 to units armour saves if they were withing 6”(we made that one up).

Deployment
Units were deployed in accordance with the scenario deployment. The two Tzeentch Sorcerers both took their signature fireballs and I have forgotten the other spells. It didn't matter as the Dwarfs dispelled all but one fireball during the battle. Despite Chaos finishing their deployment first and the short legs of the Dwarfs. The little stunties still managed to sneak the first turn. 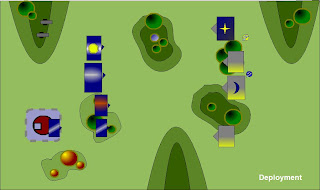 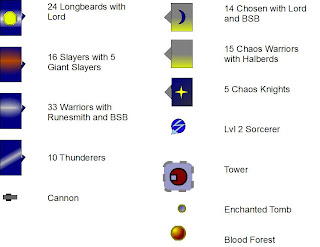 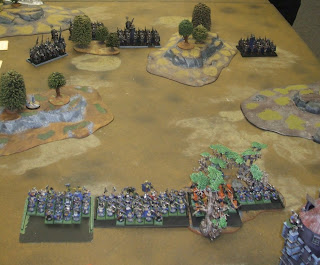 The Armies line up for battle.
Turn 1
The battle began with the sound of cannons!! One of them was a misfire and the other failed to wound a single Chosen but no matter that is how the battle began. The only other movement on the Dwarf side was the Thunderers who moved up to the edge of the woods. The Warriors then began a general advance across the front of their army and the winds of magic did nothing to write home about. 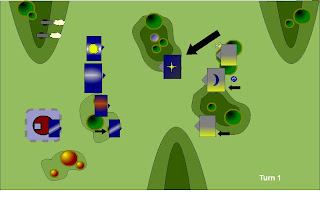 Turn 2
Was much the same as the first for the Dwarfs but this time a cannon found a Knight and sent him back to his god! The Dwarf made small adjustments to their line and the Thunderers in the forest were still out of range of the nearest group of warriors. Chaos continued their advance with the exception of the knights who slowed to allow the rest of the army to catch up. 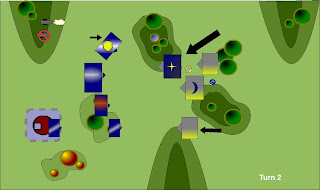 Turn 3
Finally the Warriors came in range of the Thunderers in the forest who let them have it and killed 3. once again the cannons fired into the Chosen but this time those that were wounded were saved by the blessings of their God (Divine Greatness will be mentioned later). The Dwarf Lord also brought his Longbeards up in an attempt to flank any Chaos units moving from around the hill. Chaos continued their steady march forward with the Chosen edging slightly forward of the knights. The winds of magic blew stronger and forced the Runesmith to use one of his runes of spell breaking. 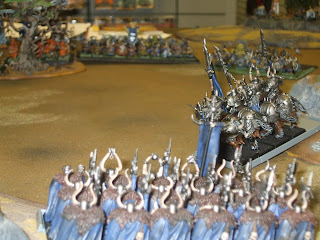 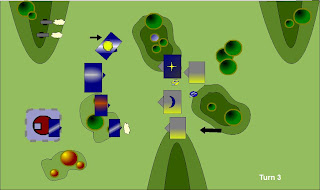 Turn 4
Once again the Dwarf cannons fired into the ranks of the Chosen this time killing two, not enough to panic them yet. One of the cannons also misfired and destroyed itself as well as all of its crew. The Thunderers killed another warrior in the unit apposing them. Sensing the time was right the Chaos Lord lead his Chosen Warriors against the Dwarf Thunderers who chose discretion over valour and fled back through the woods. The Chaos Knights also moved up to stay along side these mighty warriors. Finally the winds of magic blew strong and the wizards were able to cast Fireball on the Dwarf Warriors killing 4 of them. The battle was shifting to Chaos. 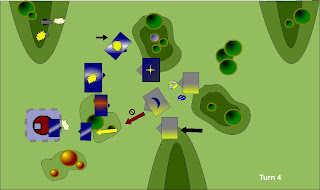 Turn 5
Sensing the battle swaying to Chaos the Dwarf Lord ordered his Longbeards against the knights. The Knights put up a good fight wounding 8 but the Dwarf armour was strong and saved all but three warriors. The knights did not fair so well as the Dwarf Lord cut down three single handily and his remaining Longbeards finished of the last one. Seeing the destruction of the Knights the Chosen lead by their Lord charged into the remaining Longbeards (they could just see them, it is not shown well in the diagram) and declaring a challenge against the Dwarf Lord. The Longbeards lost combat but having more ranks kept them from running. In the duel the Chaos lord scored only a single wound against the Dwarf lord. Other then this combat the Thunderers and cannon killed a few more warriors and no spells were cast. 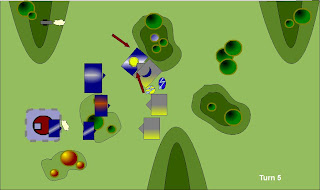 Turn 6
The Slayers declared a charge against the Chosen but only rolled a 3 on the charge dice so stumbled forward out of the woods and into the front of the oncoming warriors. There was more shooting from the Thunderers and the cannons this time the thunderers managed to kill a Sorcerer who still had not joined a unit for protection. The battle with the Longbeards was not going well and it was only the presence of the Battle Standard that kept them going. The Dwarf lord however managed a wound on the Chaos Lord this turn, a very close fight.
In Chaos's last turn both units of Warriors charged into the Slayers managing to just squeak into the Thunderers as well. This battle was a massacre and sent the Thunderers fleeing but a few slayer remained behind to die (later) and denied the warriors a chance to pursue and finish the thunderers. The battle between the Chosen and Longbeards finally came to an end as the Longbeards broke and ran. Strangely they out ran the Chosen and so remained alive and denied Chaos of any victory points for them.
Even though Chaos was driving the Dwarfs from the field they only managed 100pts ish for the cannon and was not enough to match the 400+ points for the knights and sorcerer. The Dwarfs had won the day. 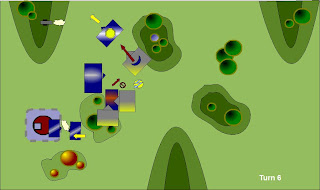 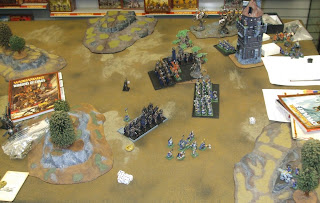 As the sun sets the Dwarfs areseen fleeing (regrouping) from the field of battle :(

After the Dust Settles..
I am by no means a veteran of Warhammer as I am learning new rules every game but here are a few lessons I learned from the battle;
Deployment, deployment was fairly standard after the battle we all agreed that the knights would have been better on the other flank and have the three Chaos infantry units march a breast down the battle field.
Flow of the battle, generally Chaos was too timid, the fact that you might not make a charge is not a reason not to try especially when your close combat power is so much greater. Basically charging is not as awesome as it was in 7th. Also by the time we did get into combat there wasn't the opportunity to finish off the units that were beaten in combat.
The Chosen Warriors rolled Divine Greatness on the Eye of Chaos, this made them suborn with a 3+ ward save in addition to their normal armour save :( For those of you that play more 40k he might as well have replaced the unit with a squad of Thousand Sons. Since my army was without any Lascannons this unit became effectively un-kill-able. The only thing that saved me was that they didn't start fighting until turn 5.
Knights, What to do with expensive cavalry in 8th ed? The only Cavalry that can hope to break a large unit of infantry on the charge are Bretonian (3 guys to a rank) or perhaps cheaper knights like Empire. Their 7th ed role as line breakers has disappeared. It seems in 8th expensive knights can be used effectively to run down routed units when they fight in conjunction with a unit of infantry. The infantry remove the stubbornness of the apposing unit and then the knights can run them down. What ever the case they are no longer the one hit wonders of old.
The Slayers unbreakable rule can be very useful, especially in the last few turns of the game. The fact that they prevented the warriors running down the Thunderers prevented the game going to a draw. I think great advantages can be made by having small units of slayers that are deeper then they are wide (frontage of two or three) and are able to stand up to several rounds of fighting even in the face of a hoard.
Magic, Well what can I say, he only got off one spell. I am thinking of getting an allied Empire Wizard, that combined with the Runesmith and rune of Vallya will give me a stomping magic phase.
Anyway, I have spent enough time writing this, please let me know what other lessons you drew from the battle or what I got completely wrong.
Posted by Savvy_Wombat at 5:24 AM