Battle for the Portal 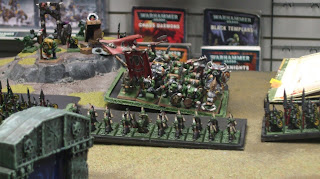 2000 pt Battle between Chaos and Orcs


Mistakes form the last post, I checked the rules on allies and you can ally armies but not just a lord/hero choice so I wont be able to take the wizard with the Dwarf army :( Until Storm of Magic comes out....maybe...
This Battle features Orcs fighting almost the same Chaos army as last battle. In fact the Chosen warriors rolled another 12 on the eye of god table and received Divine Greatness again....He also had it against the Tomb Kings who he beat in his last game...and yes his dice were checked after...
Scenario
The scenario played this time was Battle 4 “Blood or Glory.” This scenario is a bit unusual and so worth explaining. Basically their are no victory points and the idea is to break your opponents entire army. At the begging of the battle the armies “fortitudes” are calculated. 1 pt for each standard and two points for the general, Chaos had 7 and Orcs had 6. As standards are captured or Generals are killed the fortitude is reduced. If the Fortitude reaches 2 then the whole army flees the battle. Armies also deploy 18” from each other.
Their was also one piece of magical scenery used a “Sorcerers Portal” Basically it cast a random spell each magic phase at the nearest target. 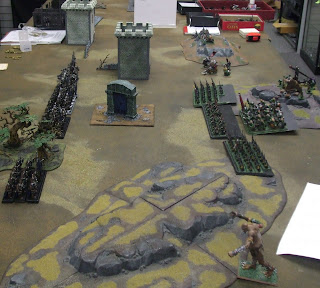 Deployment
Chaos deployed his entire army in the centre of the board, very near the portal. Apparently he wasn't worried. The Orcs also placed a fair amount of units in the centre with flanking units further out on each side. The plan for the Orcs was an envelopment. After the deployment Chaos was able to roll on the Eye of the Gods table. The resulting Divine Greatness and the fact that his General and Battle Standard were in that unit meant that I could only win if I destroyed that incredibly tough unit. On the bright side my units without standards were worth nothing to him (Giant, archers, and war machines!) 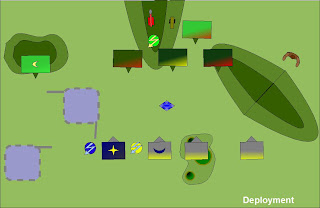 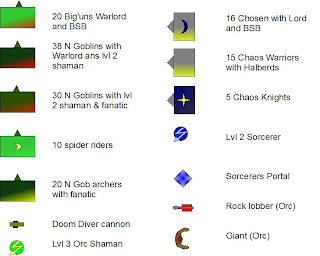 Turn 1
Once again Chaos finished deployment first but did not win the dice off and the Orcs went first. Both the Giant and Spider riders advanced beyond the sight of Chaos's flanking units. The winds of magic were light and the only spell came from the portal, it enhanced the Chosen making them both tougher and stronger :(. During shooting the Doom diver killed three knights, paying for its self in one shot! And the Rock lobber misfired :( On Chaos's turn they had a general advance with the unit on his right turning to face the Giant and what remained of the chaos knights charging the unit of Goblins to their front. The charge failed but pulled out the fanatic that was sent against the Chosen. The fanatic smashed through the Chosen and out the other side with out killing a single model :( Magic was again light and the portal cast another spell on the chosen weakening them and nullifying the previous spell. And one of the sorcerers cast a fireball on the goblins spear men killing 4. 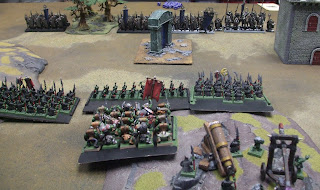 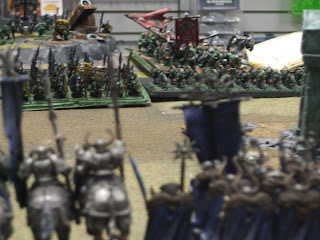 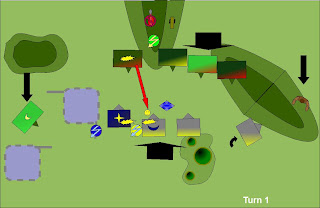 The envelopment seemed to be going according to plan until all three units in the centre failed animosity and instead of holding charged into the Chaos army. Sadly as the Goblin Archers charged the Chosen they were required to release their fanatic as well. The fanatic was shoved to the right and
out of harms way until the other unit of goblins failed their animosity and charged the knights through the fanatic. This time the fanatic killed 9 goblins and caused them to panic and flee :( All was not lost as the units on the left Flank had both got into combat with the Chaos Halberds. The combination of a Giant and Goblin hoard with Warlord should have been enough.....Magic was boring again this time the portal cast fire ball on both the Chosen and Goblin Archers as they were the same distance from the portal and yup... no Chosen died but a handful of goblins did. In the shooting phase the Doom Diver finished of the Knights and the rock lobber misfired again... Time for Combat! In the battle with the Giant and the halberds the Giant was slain before being able to strike (Chaos was a little lucky, average was 4 wounds and he got 6) The goblins threw their nets over themselves and the resulting chaos meant that the Goblins lost combat but the proximity of their general and sheer numbers kept them in the fight. The unit of Big'uns mashed their opponents and sent them fleeing but they were to slow to run them down and as the Chosen rather predictably routed the archers they were able to reform instead of pursuing and line up a flank charge on the Big'uns, we will talk more about this later. On the right the goblins continued to flee but did not panic the stone thrower and the spiders closed in on Chaos's flank.Chaos' turn went rather predictably as the warriors on his right and the chosen fought and won both their combats and only the size of the Orc units kept them fighting. No spells were cast this turn. 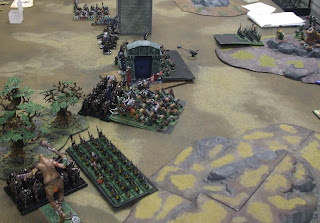 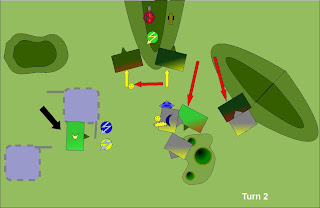 Turn 3
The Spiders being the only unit not in combat charged both wizards. The doom divers and rock lobber missed the only un-engaged unit of warriors the only highlight is neither war machine was panicked by the flood of fleeing Goblins. Combat did not go well for the Orcs, the spider riders won but the sorcerers stood there ground and both the Big'uns and remaining Goblins fled. The only small victory was that the Orc Warboss chopped down the Chaos Lord moments before the unit he was with turn tail and then were run down by the Chosen. Surprisingly the Orcs whittled Chaos down to 3 Vps it was almost a tie......... 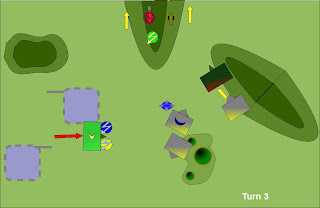 After the Dust settles..

Well not a particularly good outing for the Orcs, in fact one could argue that with Chaos's deployment and gift from the Gods it was impossible for them to win or even draw. The only thing that gave them a chance was the Chaos Lords Challenge other wise getting points for the Chosen or for the BSB and the Lord would have been next to impossible. Just thinking out loud here but, I think the orcs needed 168 Str 5 attacks to kill all 16 Chosen (on average), oh and they are only str 5 on the first round of combat after that they are str 4 and only have 15 attacks not including heros per round.....Ugh.
That being said I was most disappointed with the Goblins and Giant on the flank. 9 time out of ten that combat should have been mine. I was unlucky to snarl my own guys with the nets and then to have 6 wounds done to the Giant :( But the real kicker was I forgot to roll for the dead Giant to fall over, which is good for about 7 dead warriors if he falls the right way, about a 50/50 chance.
Since we are on the topic of forgetting things, the Chosen needed to make a Ld test not to pursue the Goblin Archers (Ld 9) if they failed this it would have prevented them killing my Big'uns for a turn or two. The final stupid mistake I made was having my Orc Shaman out of the boyz unit. A lot of his spells have short range and are good in close combat but he was out of range most of the game... C'est la vie.