So, as I have been on night shifts this week I have had a chance to build some of the new kits being produced by Games Workshop, namely the Razorwing Fighter and the Finecast Haemonculus.

The overall look of the kit is incredible. I would have to say it is one of the nicest looking vehicle kits on the market, regardless of company (high praise I know). With that said there are some issues with the kit.

First off, the thing is a NIGHTMARE to put together. To the point where after I FINALLY finished building my first one I actually considered returning my second one for something else...ANYTHING else lol. Starting off is fine when you are gluing all the pieces to the main frame, setting everything up, etc. The nightmare part comes into play when you have to glue the top half and the bottom half together because it is SUCH a tight fit. For starters, they just don't fit very well at all, even with a heavy amount of filing down (which I did). The other big thing is you have to glue the pieces for the weapon housing and the jet engine intake valve to the top half, then line up the bottom half perfectly when gluing the two halves together. So if you haven't waited for it to 100% fully set (ie waiting like 24 hours) then every time you try to put the top half on they "pop" backwards into the model and refuse to line up properly because of the way it is designed. I am a very experienced model builder (25+ years under my belt) and after a couple of hours of work, including holding it together with 3 rubber bands this is what the bottom of my Razorwing looks like: 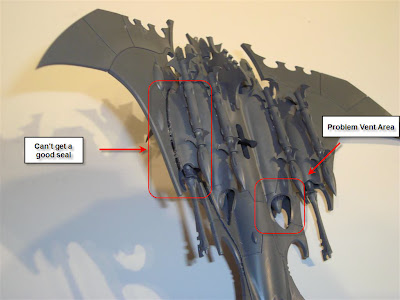 So, in order to get the model to go together properly you need to do 2 things:

1st) Patience. You need to glue the two jet intake vents and the weapon housing a day before you want to build the rest of the model and make 100% sure they set properly.

2nd) Get some sort of mini "vice clips" to hold those problem areas into place because rubber bands just don't do it. There is no way to get the kid of pressure needed to hold it together.

The second issue (well, not an issue, just a surprise really) is how darn SMALL the kit actually is lol. When you see pics of it online you figure it is about the same size as a Valkyrie, just sleeker. It isn't though, not even close. 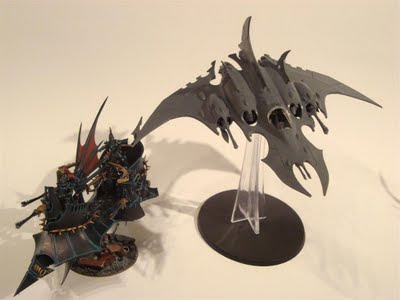 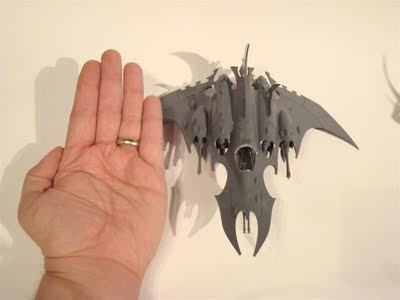 Even though the underside of the kit does greatly irk me, the bottom line though is you will almost never see it, so I have to keep telling myself it isn't THAT big of a deal lol (it's difficult though haha). The other really nice thing I forgot to mention is if you are into magnetizing your kits like Greedo did with his Valk this kit is almost effortless to do that with :)

Ah Finecast. The source of much "nerd rage" for the last couple months. I finally got my hands on my first finecast model, the new Dark Eldar Haemonculus. So here is my first hand experience with the product.

For starters the model itself is incredible. Sure, the pose looks like he is going "I AM HERE BITCHES! TIME TO START THIS PARTY!" but you quickly get over that when you start noticing all the small details that make up this model. He has two extra arms, both with wargear options which you can easily replace with Wyche arms if you don't want them. The soul cube thing which can be used for a handful of their wargear and a liquifier, which for me is the most common piece of wargear, so win! The back piece as well as the coat are also incredibly well detailed and the overall silhouette of is amazing. The model looks fantastic when thrown into a huge unit of Warriors or Wyches.

Now for the Finecast part of the model.

Overall I would have to say I think this model would look 100% the exact same in metal. I have the metal Urien, who is more detailed than the finecast one and when primed you can't tell which is metal and which is Finecast. The big difference though was Urien was a MILLION times easier to clean. I couldn't get over the amount of flash on the Finecast model, in some places right over important parts of detail (especially the liquifier gun). This model has the most flash of any model I have ever built, hands down. I checked all 4 Haemonculus models at the GW store to pick the best cast, and this one was by far the best one (one of the kits was even missing the extra arms lol). There was also a huge mold line down the center of the model (from side to side). I had to file off a lot of the "stitch" work on his robe as well as other smaller details on his shoulder and head. His right hand (the metal glove) was extremely messed up because of this as his fingers were horribly cast. I tried cleaning it up and ended up popping off his middle finger with just the slightest touch with the exacto knife. As you can guess the model feels very flimsy. I have read that they do have a lot of give though and are very durable, so hopefully that is the case.

Once you get past the all the flash and shoddy casting the model itself was actually very easy to put together. You don't really need anything other then just plain old super glue to glue it together, which is an awesome change over metal where you need either pin it or use green stuff. Finecast might not be that great for smaller models, like the Haemonculus, but I could see it being amazing for larger, more difficult models to put together, like the Hive Tyrant and Hive Guard. The other really nice thing is the weight of the model. My finecast model weighs virtually nothing. It's ultra light weight and I would imagine because of this would be much more resistant to chips then it's metal counterpart.

My personal opinion is that the ONLY reason that Finecast exists is to greatly increase Games Workshop's profit margins. That's it. Games Workshop has been talking for months about the improved quality of miniatures with this product and how nothing has ever been seen like this but I 100% just don't see it. I am actually happy I bought all my DE special characters in metal because they are flat out better casts. No contest. The other thing that is very frustrating is the price. Resin costs significantly less then metal, yet the Finecast models are INCREDIBLY expensive, especially here in Canada. I do understand that is a large investment on GW's part to switch over the molds but this could of been the perfect time to garner some good will in a time when they are jacking up all the prices of their products as well as removing the ability for certain countries to buy abroad. Consider this, Finecast models cost almost FIFTY percent MORE here then what people have to pay in the UK and the United States. As an example a box of Wracks is $33 in the states, but is $45 here...even though our dollar is worth MORE. Don't even get me started on those poor bastards in Australia lol. I honestly just can't wrap my head around it. I would be fine with it if I felt it was a vastly superior product, but just from my limited experience I would have to say that in many ways is actually inferior to pewter when you consider how much time will be spent on cleaning up these models. The only reason I haven't totally written this product off is because everything out now was sculpted with Pewter casting in mind, not Finecast, so I will wait till we see stuff specifically designed for Finecast. As it stands now though colour me un-impressed.
Posted by Ghoulio at 6:38 PM

I had thought the Razorwing would be bigger just looking at the pictures on the website. Seeing them next to something else makes them look tiny.

As to the finecast - not sure where to put my view on this - it looks so hit and miss for what the CEO has said is a premium product. I'm hoping like you pointed out that some of it is to do with the models produced so far being old metal models rather than new sculpts. Interestingly though the new Storm of Magic charcters have been produced in normal plastic rather than finecast - but they still charged the old metal equivalent rate.

Hmm I had absolutely no problems putting the razorwing together, did you make sure to clean up the edges after clipping it from the sprue? Or you could have gotten a warped model but a blow dryer can easily fix that. So far I have found all the Dark Eldar models very easy to assemble especially compared to their old ones. Now a hard model to assemble would be the monolith I will never take on one of those again.

I assembled my second Razorwing with no issues and I figured out what I did wrong on the first one to mess it up the way it is. I didnt let the weapon housing dry fully and they kept popping back into the model and just not fitting right in general. My second one I used elastics and patience and it went together really well. You are right about the DE models in general though, virtually all of them were a breeze to put together :)