Big Willie is Back Baby!!! 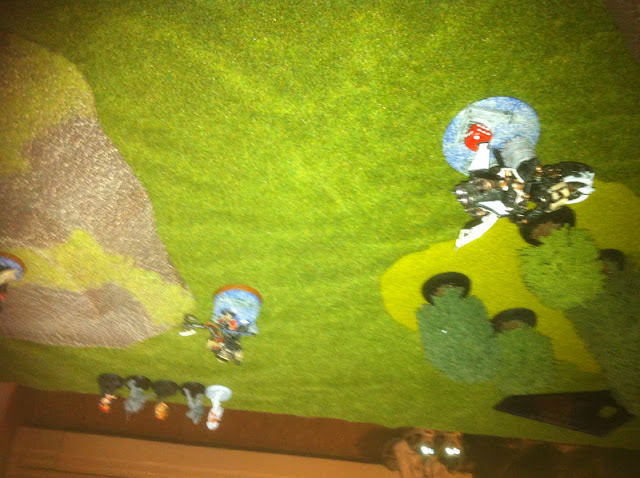 Master of the Ravenwing and his Libraian dismantle the remaining guardsmen
Hello all,

It's taken some time but I've finally gotten the awful taste of my last tournament game out of my mouth and managed to get in a couple games with the newest Legionnaire Regicide.  The initial intent was to play a series of games where the Dark Angels were looking for several of the Fallen who had taken over the government of a local planet.  In the end we played one game then switched to Wolves vs Dark Angels (almost like one of the Space Wolf books).  We used my iPhone to take pictures so unfortunately they won't be as good as we all like.  The first game was my Ravenwing against his Imperial Guard at 1000 pts.  The lists looked something like this:

The game used Dawn of War deployment and 2 objectives. 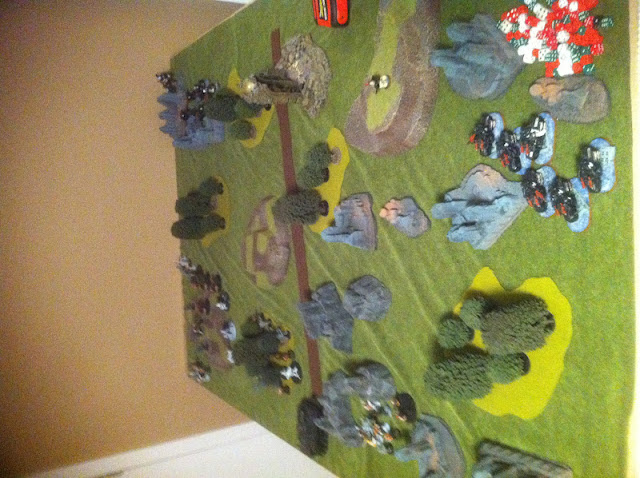 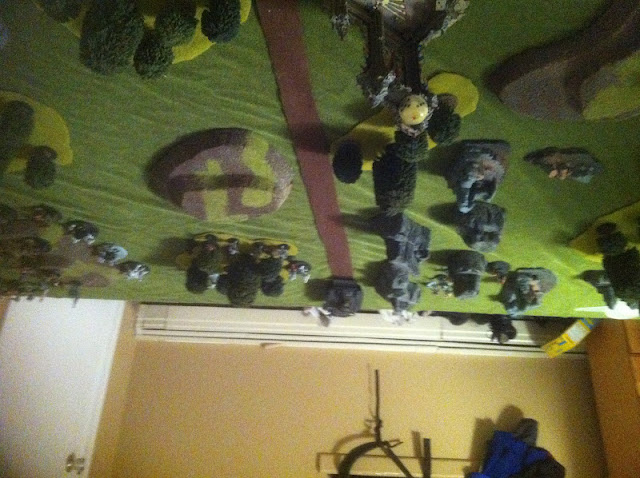 Guards men take up the high ground with good fields of fire to protect the Fallen! 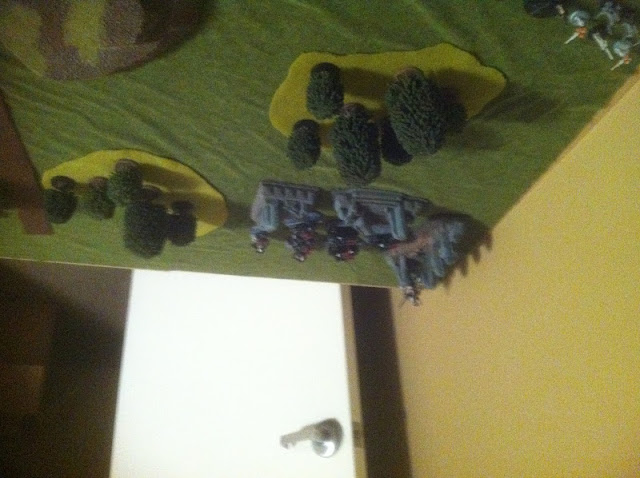 The reports of Fallen activity have lead to the Ravenwing to this country side and the amount of enemy activity all but confirms it! 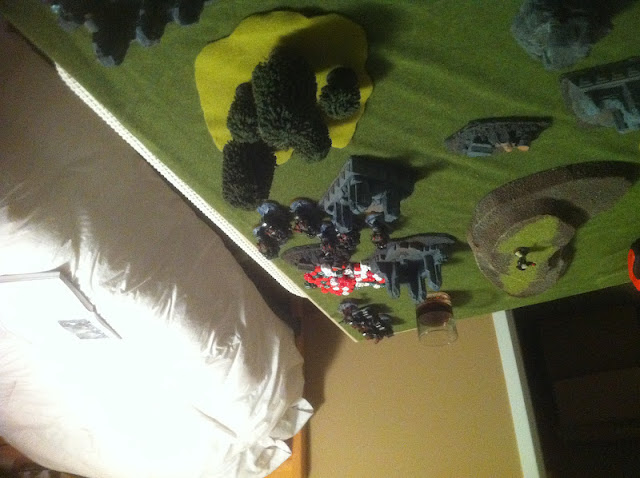 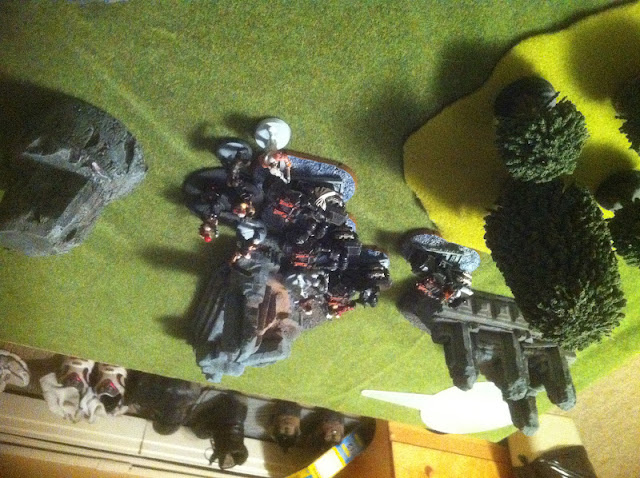 The Ravenwing smash into the western flank of the guard.  But manage to miss almost completely!  The guard line holds (and manages to do so for way more than I thought possible) 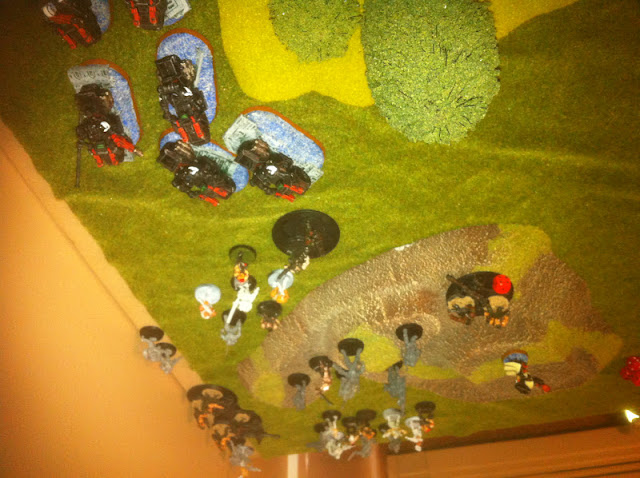 One east the Command bike squad advances, gunning down swaths of lascannon guardsmen all under the watchful eye of Sammuel 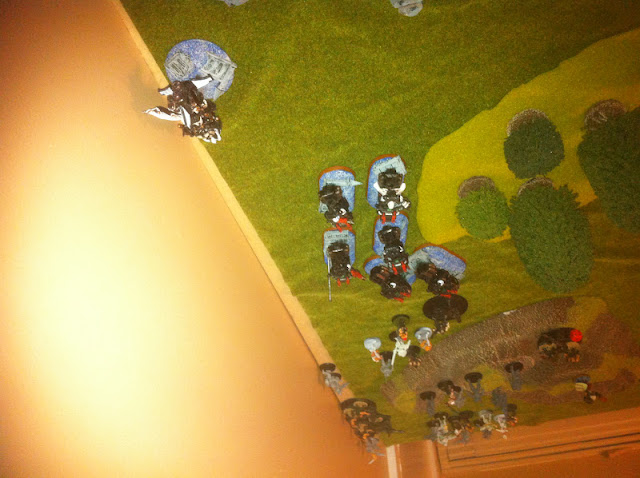 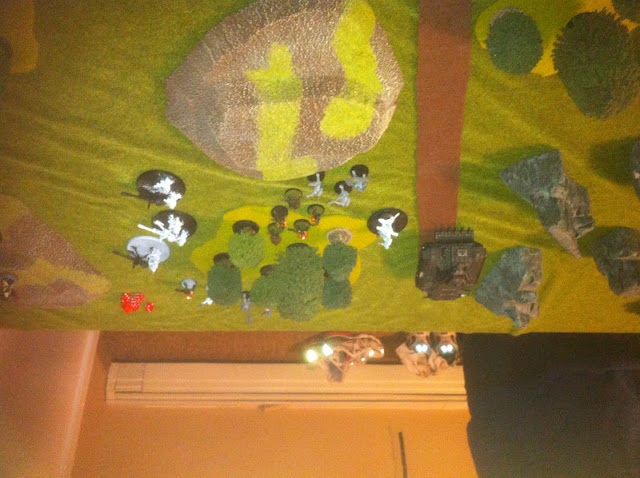 Hearing the cries of the Fallen, a Veteran squad rolls to their aide 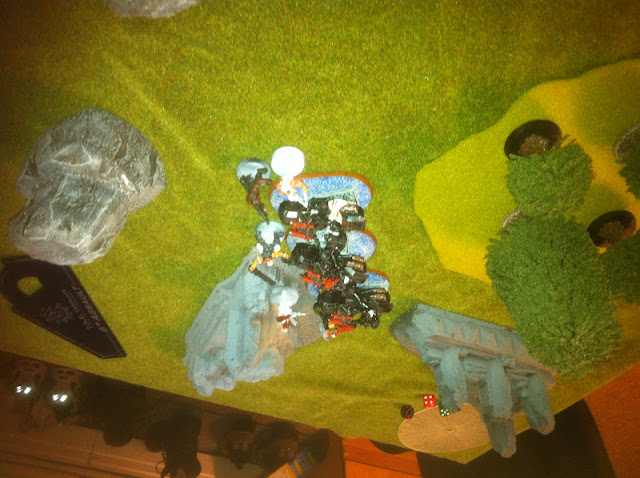 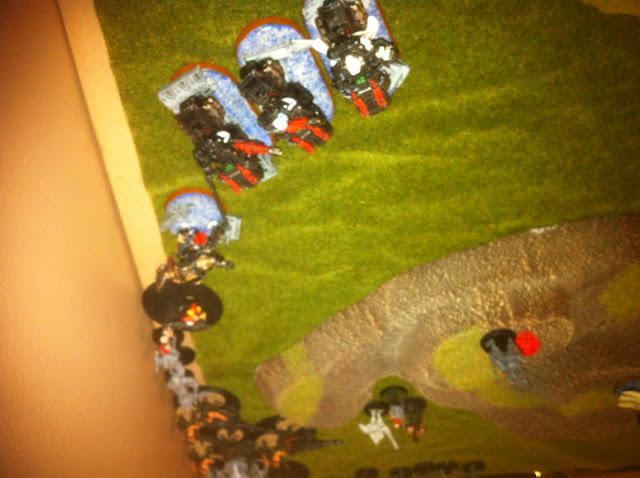 On the left flank the guardsmen don't fair nearly as well.  As the newly arrived brother-librarian  immolates almost an entire two squads of cluster men with his mind!
TURN 3 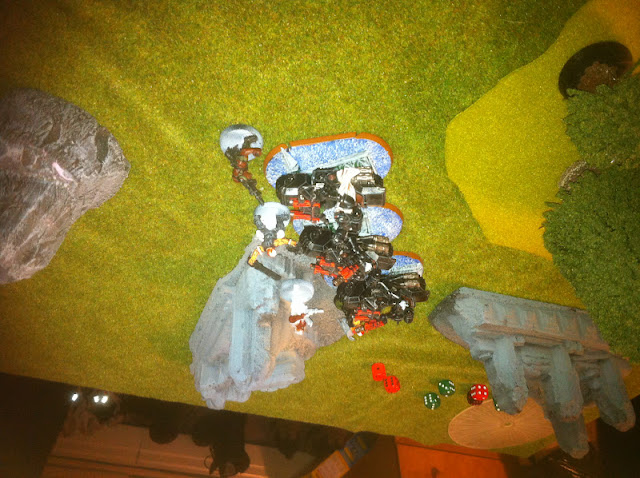 Slowly the toughness of the marines starts to attrite the guardsmen 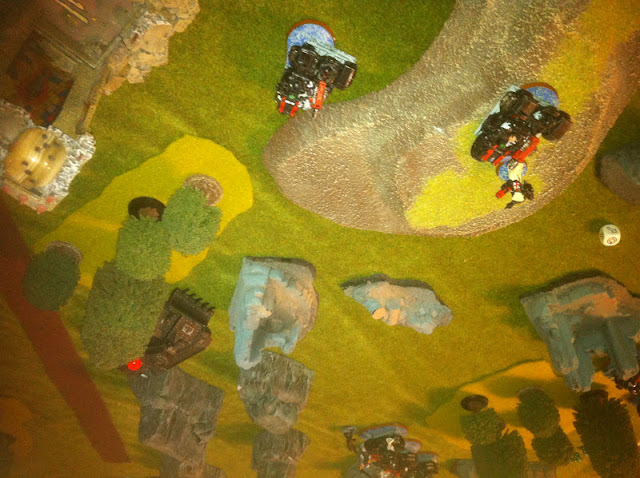 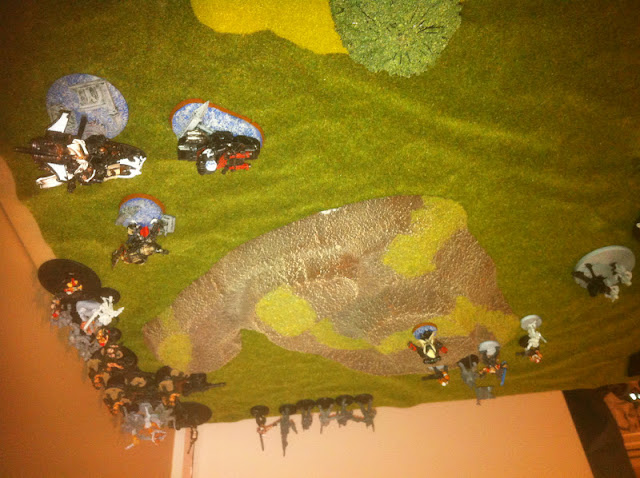 A combination of withering fire and close combat kill all but one bike.  Undaunted Sammeul and his librarian advance into the teeth of the fire
TURN 4 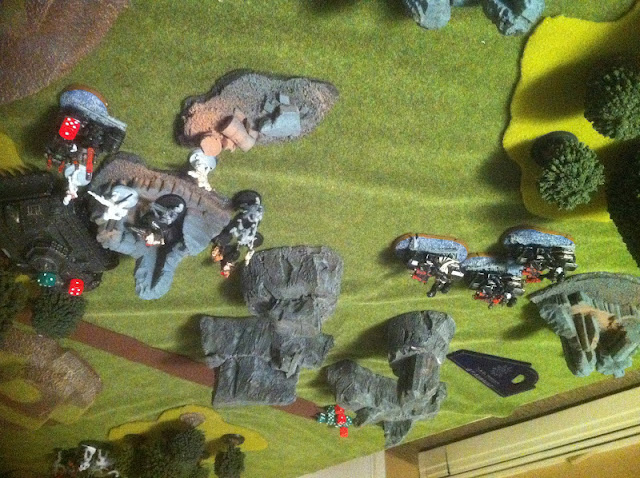 Finally the left flank of the guard crumbles and the bikers ride to engage the veterans in close combat.  Meanwhile the attack bikes have wrecked the Chimera forcing the veterans to hoof it 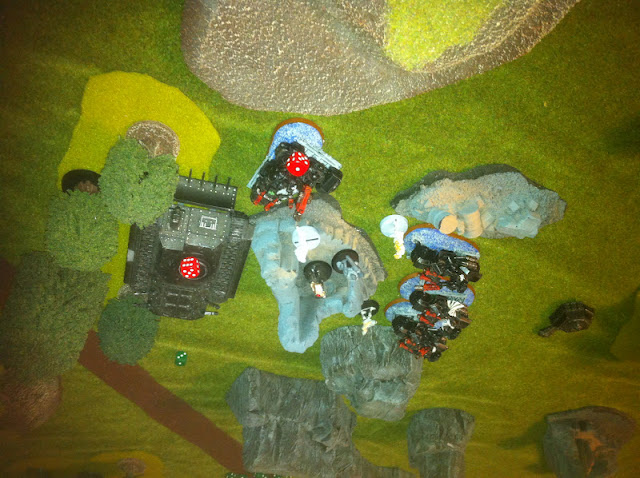 The veterans are caught in the cross fire!
TURN 5

The Master of the Ravenwing and Brother-Librarian cut down the guardsmen without pause (actually Sammuel took 2 wounds!) routing the entire right flank 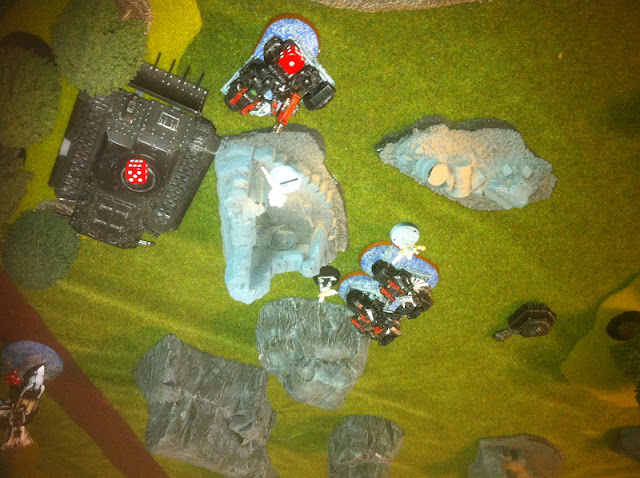 The Bikers on the left continue to engage the veterans.  The veterans fall faster than the guardsmen but still not quick enough to allow for claiming of both objectives 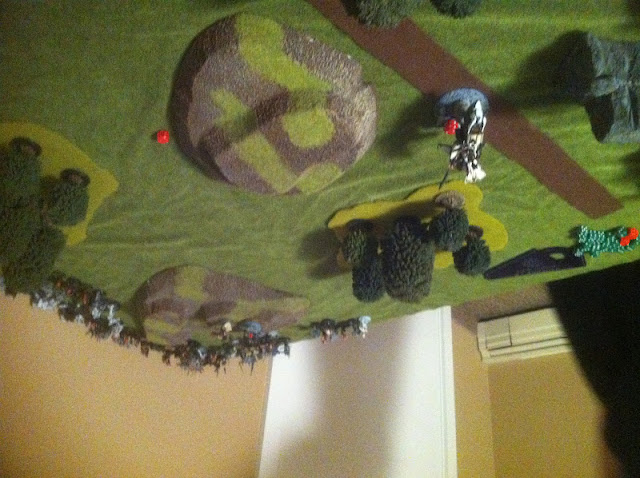 Sammuel speeds to the aid of his bikes while the Librarian holds a fallen and the attack bike holds the other.
I ended up winning the game but only because Regicide was just getting back into the game.  We both had some drinks and rolled some dice while talking about how cool the back story for the game could be.  I'm looking forward to what he will write about the game.  Stay tuned for Wolf vs Lion at 1000 pts
Posted by Big_Willie at 1:27 PM