Man, I love it when work slows down. This weekend was totally dead so I was able to get in a good 16-ish hours of work on the Old Tervigon. In total this guy took about 20-22 hours, the same as my first Trygon. Only thing is I pretty much rushed this guy were as the Trygon I actually brown washed the whole model and went back and re-high-lighted a second time to get an even nicer finish. Here he is in all his finished glory (well...except the base which is still a WIP lol). 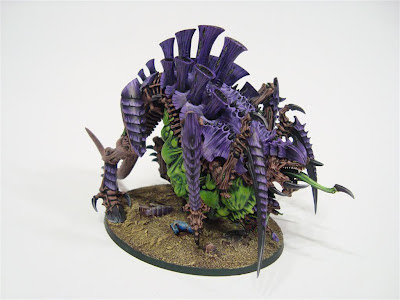 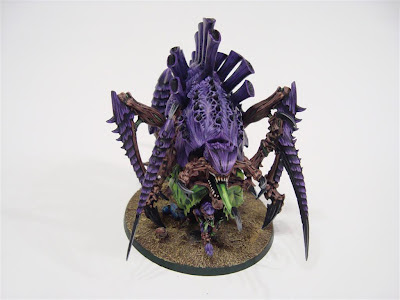 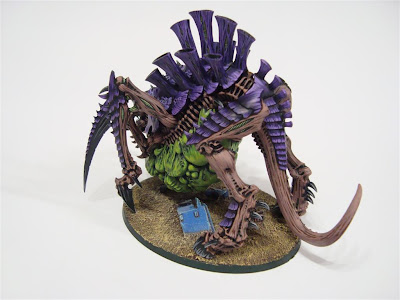 Just to give you an idea on how big this model is I did a comparison shot with it and my converted Tervigon. As you can see they arent even close as the official model is almost twice the height as the one I built. I still feel really good about the one I built as it is super close to the official model. I used the large base, it has spine banks for its cluster spines on its shoulders, egg sacs hanging from below. The only thing I like about mine more is that it has small "manipulator" arms instead of scything talons (its front arms are for walking only) but the official model you ONLY have the option for Scything Talons. Kind of sucks as I would never take that upgrade for this unit and I wish there was a 3rd set of arms (like small hands or useless arms like on the Mawloc) to use. Maybe I will just do up the smallest set of Mawloc Scything Talons to put in its place. Anyways, here they are :) 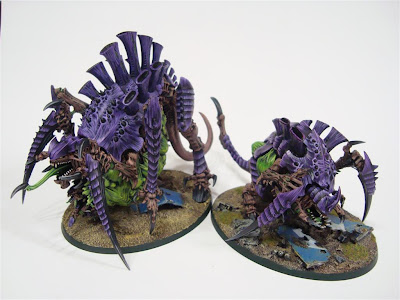 Next Up: I started working on the Ymgarls over the weekend as well so hopefully I will be able to finish the last part of my Ymgarls articles and get some good shots of the unit when its done.
Posted by Ghoulio at 9:04 AM

if i get one and if i make a tervigon(haven't decided yet) I'm gonna add crushing claws. i wish they'd made new scything talons instead of reusing the carnifex ones, that'd be cool.

@ Rhys Tunley: Actually, they ARE new scything talons that come with this kit. They are considerably bigger then the Carnifex ones. My big beef is that they are essentially a worthless upgrade lol. It would take 4 full rounds of combat just to see 1 extra hit, not great. The crushing claws do make him quite a bit better in CC, although personally I wouldn't want to spend the 25pts for the slight increase in effectiveness.

Awesome paint job. Which paints did you use?