So the last 3 to 4 weeks I have been doing a bit of work on my Tyranids while at the same time trying to find something new to paint. I tried painting ogres last November, even have a bunch of stuff for them but I 100% can't get into the idea of playing Fantasy. Last weekend I tried doing up some Marines (Imperial Fists). I managed to get the bodies done on 5 of them in two days only to realize how much I hate painting Marines. Part of it is because its basically 100% the same painting style as my Dark Eldar, except bigger models with way more pieces. I also tried some Orks at the start of April with the new paints and I just couldn't get into it and the idea of painting 100+ of them made me want to commit suicide.

So, where does that leave me? I dont want to do something super nit pickey like the Dark Eldar (aka Marines) or horde intensive like the Tyranids (aka Orks) and I can't will myself to get into Fantasy. So after seeing this blog post (http://taleofpainters.blogspot.ca/2011/12/tutorial-painting-rusty-necron-armour.html) on one of my fave sites I decided I would give it a try. So here is my first attempt: 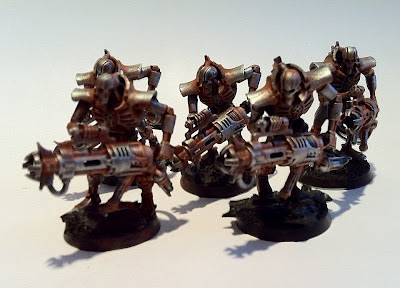 I apologize for the quality of picture as it was taken with my iPhone. Overall I am really happy with how it is turning out. The best part is not only is it looking decent (well, in my opinion lol) and it is super fast and very fun to do. Next up I am going do up some chipped paint for the main armor plates (shadow grey) and then I am going to paint the green glow for the eyes/weapons. The bases are also going to be a Mars red earth base (fairly simple) to match the rust and dust on the Necrons themselves. Fingers crossed that this works lol. More pics with my actual camera tomorrow or Monday of the finished models.

I did a bit more work on my main test model trying out new things (as I have literally never painted like this before). For the most part I am super happy with how he is turning out. I went out of my way to do virtually no edge high lighting and just let the chipped metal do the work. This was also my first attempt at object source lighting which is *okay*, not 100% happy with it and I know I can do better. 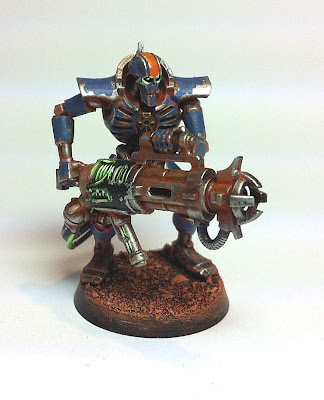 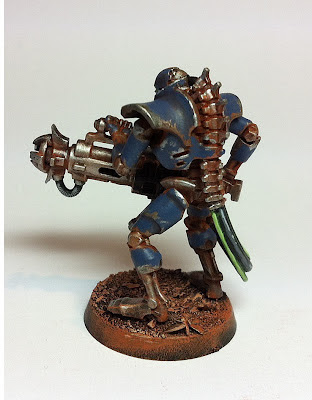 Very, very cool. I like the look of these a lot. Just my kind of thing.