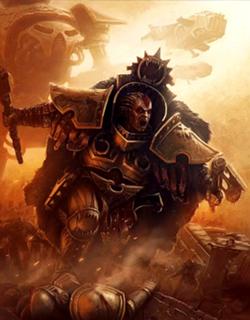 So I had a chance to look through the Chaos codex this week. First thing you notice when looking through the book is the overall quality of the product. Everything from the fantastic layout to the full colour artwork is just top notch.

There are lots of things to like about this book in regards to the rules. It seems that Kelly has kept very close to the initial design from 4th ed with this book except updated the rules for 6th ed and added a huge amount of flexibility to all the units. Most of the Chaos Space Marine units in the book have a huge assortment of options. You can customize them from being super cheap to newly turned Renegades to Hardened Vets that have been in the warp for a long time. All of these entries do a great job at capturing the feel of this army. Most of the units are super useful now too especially since everything that isn’t a vehicle can be marked including units like Obliterators and Chaos Spawns.

- The Chaos Spawns: In the 4th edition codex these guys were up with Pyrovores, Old One Eye and Vespids for the worst units of all time for 40k. In this edition there are a bunch of changes that make them an incredibly useful unit. They have the same stats as before (so WS3, St 5, T5, 3W) and retain beasts, so are super fast. They also have the Rage special rule so always get +2 attacks on the charge which is great to go along with their D6 base attacks. The two big differences between this edition and last is you never lose control of your squad (so people cant kite you with faster units) and you can mark these guys. Fed up with having no save? Throw on the mark of tzeentch. Want them to be tougher? Make them toughness 6. Another really cool thing about these guys is that they also roll on a random table at the start of each combat. With that table they either gain a 4+ save, the ability to roll 2d6 and choose the highest for their number of attacks or gain 4+ Poison. So, basically, all awesome. The crazy thing is they are the same base cost as a Ravener and I think due to their strength, toughness, being able to be marked and their random buffs in combat they get the edge.

- The standard Chaos Space Marine squad: I think this is the best squad in the entire book. The level of customization is incredible. You can make them as cheap or as expensive as you want, horde them up or use them in a standard “Tactical” Marine role. Through Marking and the Icons you can also make them bargain versions of your legion troops which is fantastic. I mean for the price of a Tactical Squad Marine you can get a Chaos Space Marine that has the Mark of Slaanesh (so init 5), 2 close combat weapons and hatred to all loyalist Marines (including Grey Knights) as well as +1 to his Leadership. That is great.

- Speaking of Chaos Space Marines…: Actually, now that I think of it all the standard Chaos Space Marine units (so Havocs, Bikers, Terminators and Raptors) are all incredible. Just like the standard CSM squad they are all priced fairly aggressively on the initial glance but then have tonnes of extra options you can add on and really make the units you want.

- The Demon Engines: I love the focus of the demon engines for this book. It really helps give the CSM more of a unique identity instead of just being spikey Space Marines. They are also all really good for the most part. I think its really cool having vehicles that can regen their hull points, get an invuln save and fight in close combat. It gives this army something totally unique and doesn’t take anything away from the real Demons you can take as allies. The Defilier is now one of the better vehicles in the game. It gained so much with the edition switch over its crazy. 3 guns, 4 hull points, fleet, a 5+ save, causes fear, and the ability to regen hull points makes it just crazy durable and versatile. I also really like the Maulerfiend as its priced cheap enough you could use it as a great alternative to turn armor into a fine paste (which is where it excels). The only one I don’t really care for is the Helldrake, but I will get to that in a minute.

- Icons vs. Marks: I love that Marks and Icons do totally different things. Like a Mark of Khorne gives Rage and Counter Charge while the Icon of Khorne gives Furious Charge and the ability to re-roll Charge Ranges. Just adds a lot of variation to the tried and true gods of chaos. Also really cool to see the Icon of Slaanesh bestow Feel No Pain instead of the Icon of Nurgle (makes total sense).

- Chosen: The new models are phenomenal for this squad. I love how you can customize it as well, just makes for something really unique. The downside though is how prohibitively expensive the close combat options are. I mean, a Terminator comes with Terminator Armor (so a 2+/5++ save), a Power Weapon and a Twin Linked Bolter and he costs 31pts. A Chose Marine with just a Power Weapon costs 33pts. I mean a Grey Knight with a FORCE Weapon, Storm Bolter, special grenades, psychic defense AND psychic powers is 20pts a model. It makes no sense to me. The only real use of this squad that I can see is to get a bunch of special weapons…that’s about it.

- The Helldrake: It’s kind of cool…I guess. I do wish it was more “demon-y” and less “dragon-y” though. The main reason why I am not sold on it is simply I can’t understand what role it’s supposed to play. It only comes with 1 gun and is only BS 3, so its AA weapon will on average only hit twice at str 8. You could take the flamer (free option for the switch) but then you can’t really fight other flyers. It can also hover…but doesn’t have any close combat stats and it would make it vastly more vulnerable to enemy fire, so I don’t understand why you would do that. When I look at the Forgefiend it makes the Helldrake look even less appealing as it’s virtually the same price but gets twice as many shots and starts on the board. They are almost the same against flyers too.

- The Hellbrute: I gotta say when I saw the model I pretty much lost my shit. I figured it would be a smaller demon engine as all of them in this book are huge, so kind of like the halfway point between a Forgefiend and an Obliterator. Alas it’s just a standard dreadnought right down to the stats and price. The rules that make you lose control of it are mostly gone except when he gets shot and hurt, then you are just rolling to see how much he wants to go hunt down what shot him. I just felt like they missed an opportunity to do something super cool with this and get even more separation from loyalist marines.

- Mutilators: The most redundant and useless unit in any book. They are literally obliterators without guns. The models are horrendous and are only matched by their rules.

- Noise Marines: The two “make or break” scenarios for me getting into this army both hinged on one squad, and that are the Noise Marines. I have always wanted to do a Noise Marine army for as long as I can remember (I even have some Marines I did about 8 years ago that I will be posting some pics of very soon). I said to myself “If the rules for Noise Marines are good and the Legion Troops get new plastic models then I am 100% going to get into Chaos”. Alas, neither of these things happened. When looking at the squad you notice that two cool things did happen. First is that all Sonic Weaponry (including the blast master) ignore Cover Saves, which make the Blastmaster AWESOME lol. The second is that (on average) they are 5pts a model cheaper than last edition. Both awesome. Where it falls apart is when you realize that the Sonic Blasters weapon type got changed to “Salvo” and that 100% undoes everything. Ugh, why on earth did Kelly do this? So now instead of having a great mobile fire base you have a super static shooting squad because if you move you only get 2 Shots at 12”. Who cares? Standard Rapid Fire weapons are better than these. The other major head scratcher is that the sacred numbers have been completely forgotten. What I mean by that is in order to get a Blastmaster in your squad you have to have 10 models, which really sucks and should have been switched to 6. The last real deal breaker for me, even more than that other stuff, is that the Sonic Weapon Upgrades are in Finecast. So, if I wanted a 10 man squad with an Aspiring Champion I have to buy 2 weapon packs ($36) and then a Sergent upgrade pack ($18) to go with my basic Chaos Space Marine squad ($44). So that’s basically $100 for 10 Space Marines and you have to deal with Finecast. Fuuuuuck that! lol

Overall I think Phil Kelly did a fantastic job updating this book for 6th edition. There are a huge amount of builds that you can make with this book. Literally any of the legions or renegade factions can easily be re-created. It’s also the perfect book to finally allow people to use their old “Lost and the Damned” armies. When you take into account allies there really is an almost limitless amount of options. I *love* that. The only kind of minor downside is that it is very similar to the 4th edition Codex and some could say it really feels like a “Kelly-fied” minor update to that book. There were almost hardly any new units added (just the 3 demon engines and Warp Talons which are basically just super Raptors). That isn’t necessarily a bad thing considering the older units were just updated and given more character and in some places made relevant instead of useless. If this is how the rest of the Codices are heading in the future then I think that future is going to be a bright one for 40k players.
Posted by Ghoulio at 3:35 PM

Thanx for the review!!! Sad that mutilators are sucky... Glad to hear the fiends and basic squads are so customizable!!

Not a big fan of the Maulerfiend. It will get torn apart by krak grenades and melta bombs in combat. 4 Attacks on the charge, st WS 3, I 3, just doesn't make it seem all that great in combat. Granted it can soak up a few hits and is decently fast. The magma cutters are great against tanks and characters though. Still much perfer the forgefiend. 3 x Ectoplasma cannons ftw.