Over the last couple weeks I have just been plugging away at some current projects. The number one thing I am working on right now is the mega Eldar revamp to update them to 6th ed. I added a new unit of Dark Reapers to replace the 3rd ed ones I have. This way I get much nicer figs and an Exarch that is armed with a Tempest Launcher, which is huge. I also updated my Vypers to have 2 Shuriken Cannons each as they greatly benefit from the new 6th ed Fast Skimmer Rules. After that its mostly re-basing and adding one or two new models. Here is a quick pick of the conversions for the under-slung Shuriken Cannons and the new flying bases: 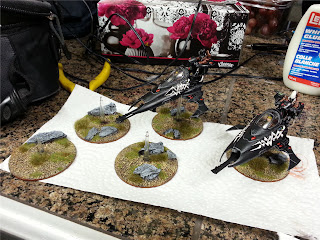 For the second project my friend Matt and I also picked up the Warmachine 2 Player Starter set just to try something new. So, in between projects I have been plugging away at the starter figs. The first thing I noticed when I started putting these together and painting them is that they are NOT Games Workshop miniatures. They have a fraction of the detail and leave much lacking in the form department. With that being said the more I work on them (also have some Trolls which are significantly nicer then any of the Warmachine figs) the more they grow on me. I have really started liking the super goofy cartoony look. Really nice change of pace from 40k both in rules and miniatures. I am going to treat this game like one would for Necromunda or Blood Bowl. Just a small faction of 20 models painted to a super high level (for the Trolls). For this starter set though I am just doing very basic painting. For this guy its just one level of high lighting. Super basic. 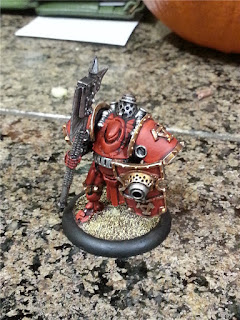 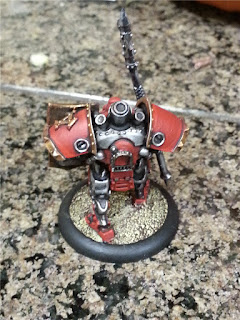 that "conversion" sure looks like modeling for advantage to me Ghoulio.... stretching an extra inch or two of range out of your guns?

.... Just kidding, have you moved down to our end of the city yet?

Damn! You got me! Trying squeeze every last bit of awesome out of these grossly overpriced tinfoil planes! lol

As far as moving down south its not for two more months (Dec 17th is the move in date). Cant freaking wait though!