After recently completing my new Necron Army I was somewhat at a loss as what to do next. I spent about a week looking over the Chaos codex when I came into the same issue I do when I look at the regular Marine codex...I have no idea how to build an army with this book lol. I look over the units, I can see a couple units I would like to have but the idea of making a coherent list just baffles me.

So, seeing as there are no other armies out that even remotely interest me I decided to look back at the remaining projects I have still left on my table. I know I want to do a slight revamp for the Dark Eldar to bring them into 6th but adding Eldar allies and a defense line. I also was looking at the Eldar codex and noticed it actually isn't looking too bad with the changes to 6th. After realizing that I decided to take a look at what I needed to do to update the army as I haven't played it in 3 years and the needed changes are surprisingly little.

My War Walkers have been one project that has been staring me in the face for the last 3 years. I originally had them armed for 3rd edition so they had Star Cannons (back when they were 3 shots each) and a Scatter Laser (back when they were D6 shots each). After "Octocon 2009" I realized just how shitty that combo was as my Scatter Lasers did all the damage with the massive volume of shots and my Star Cannons were just a waste. So I spent the weekend updating the weapons, re-basing the squad and finally finishing the last model in the unit. Overall a very productive weekend lol. 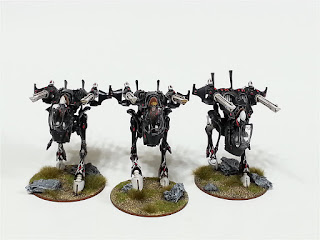 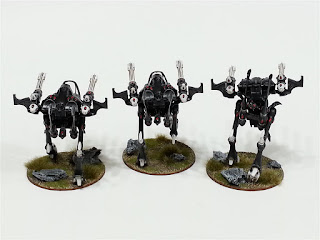 Up Next: After redoing these guys and realizing just how expensive this hobby has gotten it got me thinking about the idea of what one needs to do to revamp their older armies to get them ready for the newest addition and why, for many people, this is a great direction to go instead of starting fresh, which is something I have always done.
Posted by Ghoulio at 6:30 AM

And yes, 40K is expensive these days.