1st Game of Kiss Me Hardy

A bit late, but I had a great game of "Kiss Me Hardy" by Two Fat Lardies.
Its an age of fighting sail game.  Ours was 4 British ships, a 1st rater, 3rd rater, 5th rate and 6th rate (almost a frigate) took on 2 French 3rd Raters, a Spanish 120 gun monster 1st rater, and a smaller french ship.

The thing about this game was that the rigging was RIDICULOUS.  The guy James who put the game on put a huge amount of effort into his ships.  ALL the lines were there, so the ships were amazing to look at and play.  I don't even think I got a good close up shot of them.

Anyway, we also used some nice plastic "fired" tokens which look quite nice to show who's shooting who because its hard to tell at such a distance.

I had to leave early, but when I left, the Spanish monster had been distracted by my British 6th rater for quite a while, allowing my two larger ships to double team the other French ships.  Unfortunately we'd taken quite a bit of punishment so its was still in a balance.  I wanted to post the pictures anyway since it was such a good game, even though technically its not "fantasy" as Legio is generally (Covering Fire, our other blog is focused on FOW, so what is an historical gamer to do?!).

Can't wait for XMas to arrive.  I'll be showing BigWillie and our parents Force on Force using his 40k figs. Should be a blast. 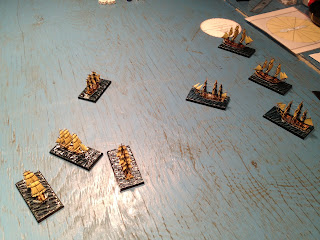 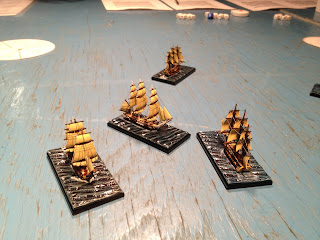 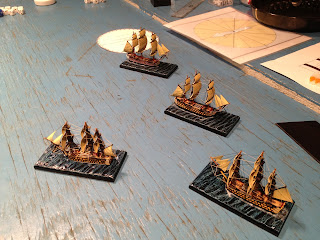 Good closeup of the lines here. Just beautiful.   My ships are on the bottom of the picture blasting the two upper French/Spanish ships.  Of course, they are shooting back.. 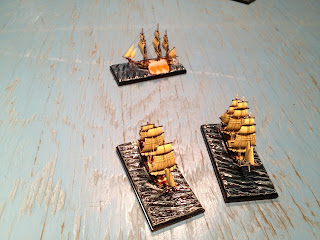 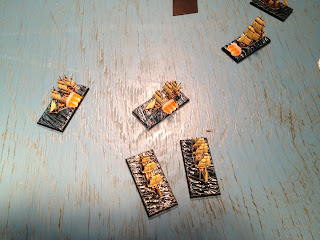 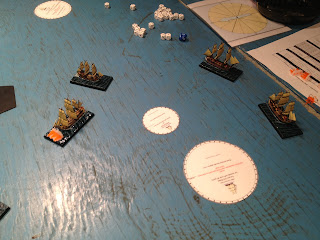 The maneuver circles you can see are for different "Rated" ships, so the large one is for bigger ships, the smaller one for 6th raters and frigates.  This allows smaller ships to out-turn their larger opponents.  Reminds me rather of the old Car Wars "manoova doova" that my brother and I used to use.