This is by no means official, sanctioned or otherwise and I don't think violates anything..

Had a bit of free time over the break, and I realized that I was spending quite a bit of time with a notepad in evenings jotting down army lists.

Although I love Army Builder, I find that I have to keep subscribing to update anything, and I found that I was always out of date.  So I started taking army books for FOW and MW, and just flipping through them, and writing down the army in a fast Unit - Cost, type fashion to simply add up the points and make sure I was within the limits.

This led to me making a simple app that allows me to make and save armies while I'm on the subway or otherwise not doing a whole lot.  Its very simply a points adder.  You start with this screen: 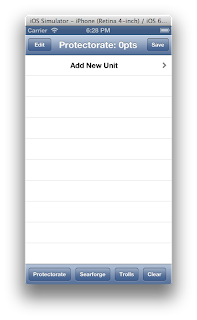 A pretty bland, basic table.  I added data that I had on Protectorate, Searforge, and Trolls armies, and even then generally on units that I either own or want to own.  So REALLY basic.  Click on the "add new unit(s)" button brings you to the army selection table: 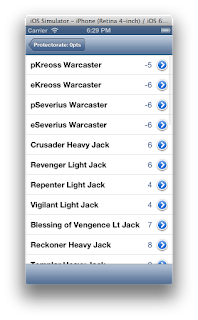 which just allows you to enter whichever you units you feel like.  The total is added up and updated as you go.  To keep it REALLY simple, I assumed you'd always use every point of Warcaster "Jack" points, so they are generally simply a negative cost.  When you're satisfied, you click the back arrow and... 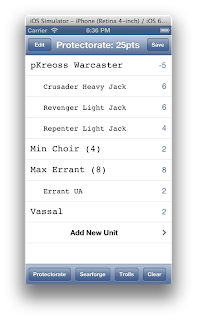 Zing! A decently formatted list.  You can rearrange the cells as you see fit.  I kept everything separate, so a unit attachments, Battlegroup Warjacks etc. are assumed to be separate units, but there's a flag that shows them to be "optional", so they get nicely indented.  Additionally min and max sized units are considered separate units.  You can see the Jacks are indented as is the Exemplar Errant UA, to keep things organized.

Did I mention this was a simple app?  When I get more time, I'll probably add an online element so I that I can create new army lists to make, save multiple armies for each faction, and probably add new games (like FOW).  The only issue with games like 40k and FOW is that you have to have "how many dudes" in a unit, so that will make things more complex.  Oh well, gotta love WM list building in the meantime.  No stats, no printouts, no optional extras.  Nothing but a calculator.  Alas I can't sell the app in the store because it contains WM IP (and its pretty crap anyway..) so this is a personal project.

Oh yes, and my lovely wife who is a wizard with graphic design even made an icon for me, based on the Warmachine logo version 1 (version 2 was too hard to crop).  Pretty awesome. 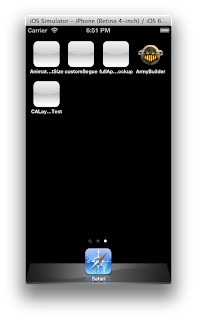 Awesome work! I haven't played WM but I love the logo that Rae did up for you!

Yeah man, she can rip out graphics super easily these days. You should try WM. Its very 40k/FOW player friendly, and the system is lots of fun.