After a very long hiatus from blogging due to it being m busy season at work and a move into our new house I now finally have a permanent painting station and a photo station so I will (hopefully) be back uploading things on a regular basis again. Over the last few months I did manage to get a bunch of stuff done and I finally have pics so I will be posting them over the next few weeks.

First up is my 5 man True Born "Dakka" squad (3 splinter carbines, 2 splinter rifles). I used the left over carbines from the scourges. I decided to give them a bit more "bling" then the standard warrior squads and pain their helmets white. I also did a lot more gold and silver (bling) then I do on my normal warriors in an effort to make them stand out a bit. 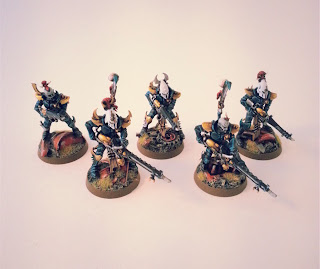 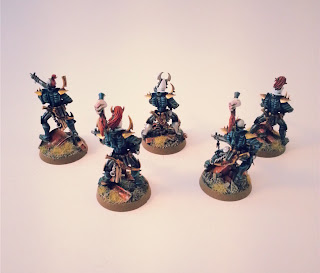 I am kind of changing up how I am approaching projects this year. Instead of picking a new army and just working on that I am going to rotate what I paint between my 4 major armies in an effort to finish them off (probably have about 5000pts of unpainted stuff between them). So next up will be my new Wraithlord then some stuff for my Necrons. I also bought a bunch of Forge World Eldar stuff recently to help breath some fresh air into the old Eldar. Looking forward to being more active on the blog again.
Posted by Ghoulio at 1:51 PM