So in my last few posts I have been mentioning doing a larger project for my Eldar and this is the first model for that project.

A couple months ago I was talking to my friend Jon, shooting the shit about warhammer like we always do, and we started talking about his Forgeworld Eldar Corsair army. It's an army I have always wanted to do as I love the figs and the idea behind them, plus you can use Eldar/Dark Eldar as part of the list. So after some wheeling and dealing he ended up selling me his Corsairs.

Now that I have the figs (1 xPhoenix Bomber, 2 x Nightwing Fighters, roughly 20 corsairs, 3 Wasp Warwalkers and a few other bits and pieces) I started trying to figure out how I wanted to go about painting them. They have a bunch of fantastic colour schemes in the Doom of Mymeara book. I also was seriously thinking about painting them like my DE so I could use them as one army. Then after looking at what I owned for all my armies I had a bit of a brain wave. Since the Corsairs are 100% Guardian based I decided I will paint them like my Ulthwe and use them as "Black Guardians" since they are all BS 4. So, the Phoenix being my favorite model of the bunch was just calling my name so I had to paint it first. 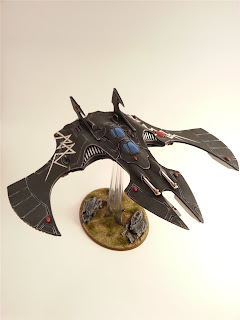 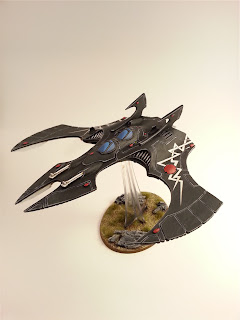 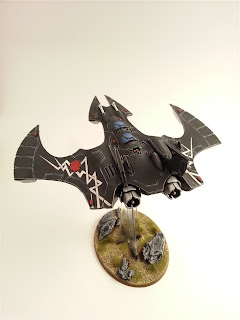 One nice thing about getting the Forgeworld flyers from my friend Jon is he had a great idea on how to attach them to their bases (since they came out before the current flying stand). He used a whole bunch of magnets and attached them to the flying stand and the flyer itself. It's amazing how steady it is on the stand and how easy the whole thing is to transport. 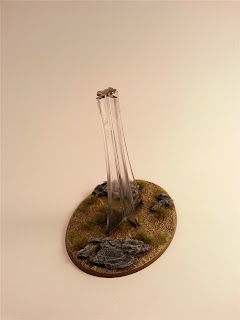 Next up: I am working on finishing some stuff for some friends (Warmachine Starter Set) as well as finishing the 4 Dark Reapers for my updated Reaper Squad. I am also finishing doing some touch up work on the Nightwings (basically switching out their Bright Lances for plastic ones as they look way better and aren't bent to shit lol). I am also going to start rebasing the entire army so it looks like the flying stand for my Phoenix. Lots of stuff!