Lately I have been losing a lot of interest in 40k. Certain things about this edition just aren't doing it for me and I am not finding it terribly fun. So with that being said I have been looking into other games. I tried getting into Warhammer Fantasy by doing multiple test paint jobs of some ogres to no avail. I just couldn't get into the game from both a hobby standpoint as the miniatures just don't interest me and from a rules standpoint as I just don't like how rigid the game-play is.

Enter Warmachine. My friend Matt and I picked up the Warmachine starter set last year (I posted a test pic of the Khador Man o' War a while back). It took me a while to get into painting it as I was trying to finish off a bunch of 40k stuff at the time. It's 100% finished now and I will be posting some pics of both sides over the next week. We have done a bunch of test games too and I have been having a blast playing it. The game isn't with out its faults of course but I am having a great time with it just because it is something different. The biggest gripe most people have when getting into WM is the quality of the figs and if you go Warmachine its totally justified as GW is light years ahead for both quality of the sculpting and the plastics. The Horde side though seems to be a massive improvement over the Warmachine side, especially with their newer stuff.

I was looking through the different factions and the one that caught my eye and made me want to start playing Warmachine are the Trollbloods. The Axer (shown below) and the Dire Troll Mauler specifically just really stood out. I love the posing and the form of the figs. Since most of my projects over the last year and a half have been "speed painting" projects due to having way less time I decided it was time to really push and challenge myself with a project. Since in Warmachine a standard small force is 25pts and most armies at that size will run between 10-20 models so I figured this would be the perfect place to do it.

Here is the first model for the army. I tried out a bunch of new techniques and mediums I haven't used before (notably the rust effect). Overall I am very pleased with how he turned out. The only thing I am not a 100% sold on is the base as I think its maybe a bit to drab so any suggestions on how to make it "pop" would be much appreciated. I currently have my full 25pts list built, based and primed, ready to go and have been working at it on a very steady pace so I am hoping to keep the quality shown below for everything and updates coming at a steady pace. 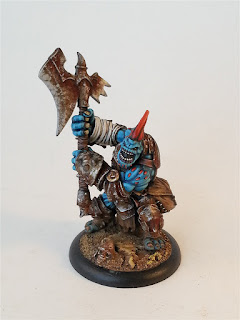 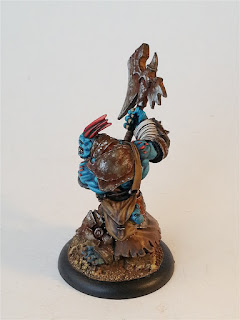 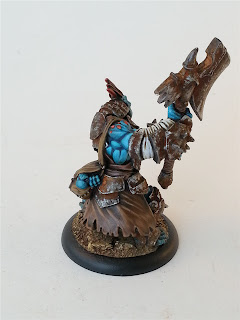 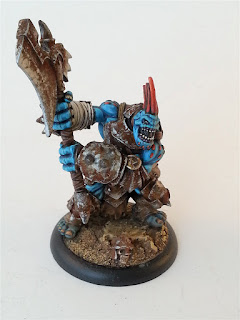 Next Up: Trailer Hammer...the battle report!
Posted by Ghoulio at 6:59 AM

Fricken' amazing stuff man!
One day my Protectorate and your Trollbloods will do battle!

Sweet paint job! I've never played the game but seeing models like this one make me I retested in learning.

@Big Willie: It's a super fun game. Kind of reminds me a bit of something like Necromunda or Bloodbowl just due to the fact that you are playing super small armies and everyone has special abilities. So far I have only had 5 games and each one has been really fun. I will post some battle reports in a week or two to show how the flow of the game goes :)

@Ghoulio, check out http://fromthewarp.blogspot.com/2012/10/a-look-at-some-basing-color-concepts.html for some really good info on basing color theory there.

The brown in the rust is only slightly darker than the base and that makes the mini blend into the base, but the skin tone is so drastically different that having both conditions is throwing off the overall composition.

I suggest going lighter brown on the base and add some static grass, green or light brown. Try both and see what looks good before laying down the glue. Maybe even add a tuft. That will add some depth to the base. Also, maybe bring up the blues on the feet. It looks good with the "dirty" feel, but having that blue there will really separate the mini from the base, too.

Another option is to go REALLY dark with the base, almost black. Another trick that would be helpful, especially because you already have some good photos, would be to edit them and alter the base color digitally and see what you like better before laying down paint.

@ crazybaldhead: Thanks for the comments! I totally agree with pretty much everything you said. I actually use Ron's tutorials all the time as he has some of the best on the web (I have read that article you linked already). Basically the base was much brighter after I originally painted it then I decided to add some weathering powders to give it more of a dusty look. I kind of went overboard though and the final product is what you see in the pics.

Since then though I have completely redone the base. Its much brighter, the rock is painted more like a grey stone slab and the ground is more of a light brown. I also added some tufts of grass. It looks significantly better.

I am currently working on finishing the two Hordes starter sets for our gaming group (so we have all 4 to show people how to play) and once those are done it will be back into Trolls and Eldar full time. I am working on the Dire Troll Mauler right now and when I post pics of him I will post pics of the Axer with the updated base.

Thanks again for your comments, constructive feedback is one of the main reasons I post my figs on the old blog here :)