Despite the lack of posting since I finished my Mountain King I have actually been really busy painting getting a lot finished. With the new baby coming at the end of next month we have been really busy getting the house organized for her arrival. Despite that I have still been averaging about 4-6 hours a week painting which is really nice. Now, onto the Krielstone!

This unit was deceptively time consuming to paint. Even though it was only 4 guys they had lots of cloth wraps and overlapping brown cloth so there was a lot of work in regards to nailing down the colour scheme I wanted to use. One thing I decided on for this army since it will be so infantry centric is to help differentiate between support units and assault units. So all my support units will have brown sashes/kilts (so Krielstone Bearers, Battle Moses, Doomshaper, etc.) while the assault units will have red sashes (Fennblades, Fell Caller Hero, Madrak, etc.). Right now its working out really well both from a looks standpoint and from a game standpoint. 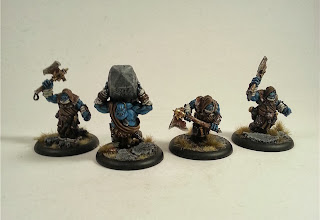 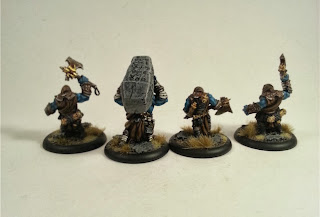 Up Next: MORE TROLLS! lol, shocking I know. Seriously though I have tonnes of stuff painted for this army as I just crossed the 30 model threshold and coming up on 80pts fully painted.