One of the things I *hate* about playing Tyranids is that with every new book Games Workshop feels the need to 100% redo everything in the book. So all options for every creature change as well as what the guns themselves do. So weapons you USED to have for Anti Tank (ie my Sniper Fex who had a Barbed Strangler and a Venom Cannon) had one of his guns turn into 100% Anti Troop and the other turn into a very crappy Anti Armor weapon. Also, the new book removed ALL of the biomorphs from the previous two editions and made it so you can't take two big guns on a Carnifex. SIGH!

Anyways, after looking at this guy's options I figure he doesn't loose anything by taking two guns (since last edition scything talons added attacks, now they add re-rolls to attacks) so I might as well focus on one roll and that is shooting. Now this guy gets 6xTwin Linked Str 6 shots at 18" range that makes people take break tests on a -1 modifier AND a Str 6, Large Blast that causes pinning. So pretty much every time this guy fires the unit he shoots at has to take 2 tests, which isnt too bad. Only problem is this combo makes him the exact same points as my Hive Tyrant...and needless to say he is no where near as good, so sadly he won't find his way into too many lists.

Anyways, here is what he looks like now. The only good thing about all the biomorphs from the previous edition being removed is that I was able to take off that incredibly stupid looking "Enhanced Senses" head (aka bunny ears) and put on the regular one. I am pretty happy with how this guy turned out with his new guns and I am in the middle of doing up his brother the exact same way, that way they can form a squad :) 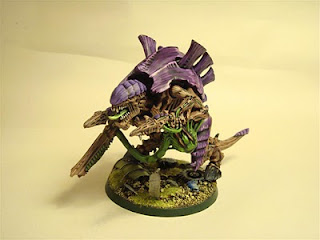 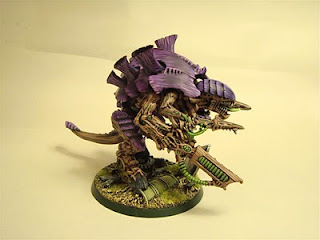