So I FINALLY have my hands on the first bunch of models for the new Dark Eldar army. Right now in my possion I have a unit of Warriors and a Raider. I have finished building it all and I have to say that these really are some of the nicest models that GW has made. Three big things that stand out for both kits is the sheer volume of bits and options, the detail of the models themselves and the lack of mould lines. Building the warriors especially was a dream since its basically just cutting them off of the sprues and glueing them together...DONE!

I have done a lot of thinking of what I want to do for my new scheme. I did a whole slew of test eldar figs and after much debate decided that I really liked my old scheme and would like to revamp/update it for the new range. Here is a quick comparison between the old warriors and the new one I finished last night. 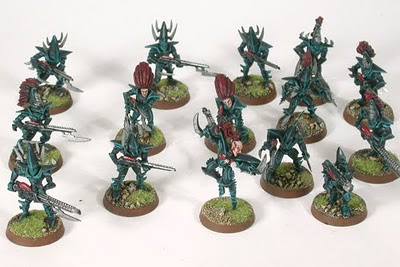 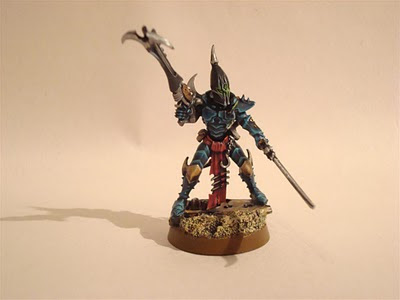 As you can see the quality of high-lighting is much improved (especially when you see it in real life as my stupid camera washes out most of the detail..its much crisper) I also added pieces of gold and steel as well as keeping the red nice and dark. I also added black helmets instead of the dark green ones of the old and added bright green, glowing eyes as I love how they did that with their preview models.

In the next couple of weeks I will finish off this squad of 10 and I will have the Raider up and running. I am also going to do an "initial thoughts" of the book as well as some sample army lists :)
Posted by Ghoulio at 3:46 PM

Great job man! I am really looking forward to getting some figures soon myself.