Over the weekend I went to an event that I have never even heard of, and that is Fallcon. Every year it runs (and has been for about 20 now) and it is a giant convention for everything boardgames. The reason I went in the first place is to attend the mini 40k Tournament that was being run, but after getting in the door I gotta say I wish I went for some of the other events (and next year will definitely be signing up for some of those). It had tournaments for pretty much every boardgame you can think of from Catan, Agricola to rarer games that I have never even heard of. The single coolest thing set up there was a mega battle for Flames of War, which is a game I would totally get into if I knew I had friends in the area that played on a regular basis. Here are a couple pics I took of the game they had set up. 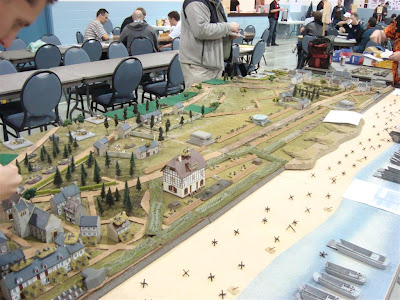 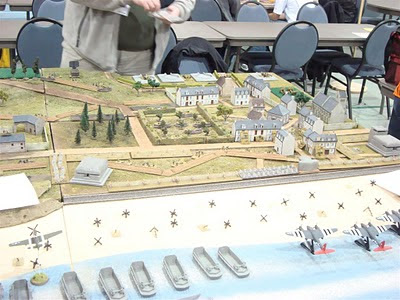 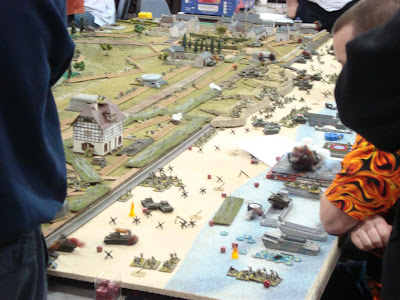 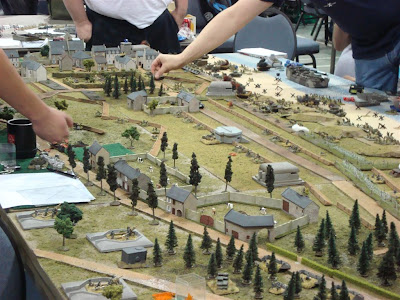 On to the mega tournament...OF DOOM! When I signed up for the tournament it was billed as a mini tournament, 1700pts, 2 games with 12 spots available with the only prize going to the person who came in first overall. I have played exactly one game of 40k since the end of June, so I thought it was about time to bust out the Great Devourer to eat some faces...regardless of how small those faces are. Here is my 1700pts list:

Pretty much just a goofy monster mash list. I was using a bunch of stuff I have never used before (Tyrant Guard, Tervigon, 2nd Mawloc, etc..) so I figured it would be interesting to see how the old list does :)

This game was against a Demon Player...and I won't lie, when I heard that my brain went "woooooot!!!" as it is an army with very little shooty, smaller numbers then me, it HAS to come towards me and basically lands near me and does nothing for a turn. One thing I wasnt counting on is that almost every unit in his army either was T5, 3+/5+ (like 9 Juggernaughts of Khorne), T5 5+ save, FNP (plague bearers), a greater demon/demon prince or chariot. Basically after about the 3rd turn I was just playing for a draw with the hopes that my Mawlocs would win the game by coming up on turn 5 to contest his objective.

High Points
- My Tervigon and Termagants almost killing his 300pts unit of Juggernaughts of Khorne in hand to hand. If I had committed just a little bit more troops to it and he didnt charge me with his great unclean one I think I would of done it.
- My Hormgaunts just mangled everything they hit, which was nice

Low Points
- Overall my army did almost nothing to his. If it was a kill point mission he would of slaughtered me. Basically he just had too much ultra tough stuff with a good saving through that used would allocation. He also also made saving thoughs like a man possessed. For example, on the turn my Tervigon and 30 gaunts charged his unit of 6 Juggernaughts he managed to only fail two or 3 saving throws on 15 or so wounds.
- I had 2 chances to win the game IF he assaulted my two Mawlocs who were about 8" from his objective. All he had to assault me was 1 demon prince, 1 khorne herald on a chariot and 3 Juggernaughts. Really, when I look at it I am thinking that both mawlocs will live with maybe 1 or 2 wounds. His 3 Juggernaughts killed my one Mawloc (so, 12 attacks, hitting on 3's, wounding on 5's which should of done 3 wounds did something like 7) and I did manage to end the turn on my second Mawloc with exactly one wound left. I then made my hit and run roll only to roll a 6, so I didnt do it...sigh. 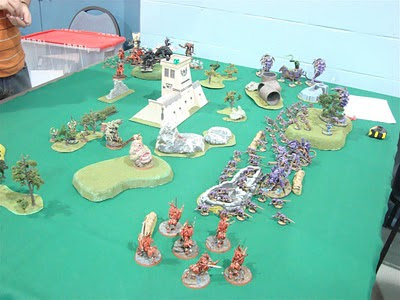 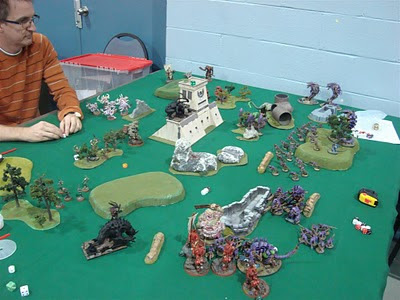 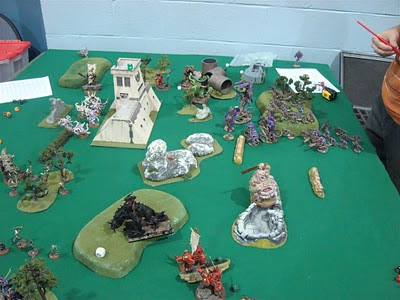 Final Result - Draw
I just couldnt get my stuff to contest his objective for the life of me. To be fair instead of just hitting both Mawlocs onto his objective and camping it, I placed them further away to make it so I didnt get charged by his big stuff. Ah well, all in all it was a pretty good game

So, this game is against Space Wolves filled with virtually everything you would never want to fight and I personally think is retardely overpowered. 7 (yes you read that right, 7) Thunderwolf Calvary (5 + 2 Lords)...CHECK! Runepriest in a Razorback with JAWS?...CHECK!...2+ Units of Long Fangs with 5 Missile Launchers each?....CHECK! It's funny, even though only FOUR people showed up, every last person brought a 'Ard Boyz style list lol. The fourth player was an Imperial Guard player who had something like 6 Battle Tanks and a stupid amount of Chimeras with Vets that had Multi Meltas. Ah well, at least all the tables were fairly filled with Terrain :)

Hi Points
- Oddly enough, despite how much I *hated* the army I was playing against, there were quite a few.
- For starters my first Mawloc rolled a direct *hit* when coming up from under the first long fang pack and it killed the whole squad
- My Hive Guard killed ALL his armor...every last one and every single shot was blown up on the first try
- My Tervigon failed his first "pooping" roll on turn 5 and man o man the Gaunts that he crapped out for some reason did SOOO much damage lol. They killed a unit of 10 grey hunters (killed 5 through shooting then they ran away). Killed a Lord in Hand to Hand and then went and killed off the second long fang pack. Go little guys!
- Hormagaunts wrecked crap...again. They also killed his other Thunder Calv lord, so that was cool.
- Trygon *almost* single handedly killed the Thunderwolf Calv unit in hand to hand (left the 5 models with 3 wounds)
- Hive Tyrant got into hand to hand and killed the crap out of the Rune Priest

Low Points
- I finally lost my first model to Jaws. I know its a game but man oh man I fucking HATE that power. Easily my single least fav thing in 40k. The worst part about it though is I actually shouldnt of lost my Mawloc as I rolled a "5" and I totally forgot MCs get +1 to the rolled (his init is 4). Thats actually pretty much it for low points lol 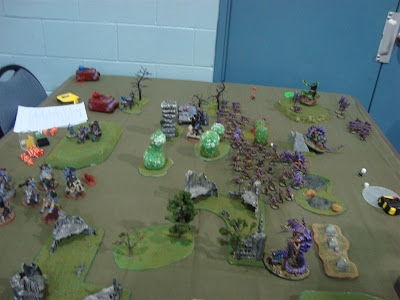 Basically he just 100% didnt play to the objective and that was what lost him the game. The entire game was me trying to figure out how to get up close to his objective through being "Jaws'd" and avoiding the Thunderwolf unit of negative fun.

Basically everyone but 1 person had 1 win and a Draw. The tie breaker was painting and since 1 army (the demons) wasnt finished, the Space Wolf army was using proxies and the IG army was grey dry brushed with some flat coats of paint on the actual imperial guardsmen it meant that I won the tie breaker. I felt bad for Rob (the organizer) because of just how few people showed up. The tables were nice with lots of terrain, which for me is a huge plus.

Next Tourney Up - Dream Team Tag Team Tourney on Nov 6th!!
Posted by Ghoulio at 3:14 PM

Well done, its too bad there weren't a ton of people there.. To be honest tho I had no idea this was even going on :S Anyways, I'll catch you at the dream team tourny.. maybe get a game in :P Hopefully I'll have my fleshtearers all painted up for that.

Congrats Mike! I was going to say that the Daemons player didn't deserve the win because of unpainted models with square bases.

Who are you teaming up with for the doubles tourney?

For the doubles tourney in Nov it is actually a "team" event. So you have 3 other team-mates, so each game you play with a different partner. Should be fun. Going with my friends Jason (Eldar), Nathan (3rd ed Dark Eldar...for kicks lol), Jon (IG) and myself (Eldar). Should lose every game, should be fun :)