As most folks into the Wargaming hobby I try to start a lot of projects that I just can't seem to keep the momentum going. I have tried doing 40k Orks about 4 or 5 times (posted a bunch of pics here) and even though I LOVE the model range, one of the best out there for either system, I just CAN'T get the army going.

This point brings me Warhammer Fantasy. I have always loved the fantasy setting, by far my favorite of any setting. I love the idea of swords of sorcery, knights in armor and monsters (look at how many Nid MCs I have painted lol). Certain armies really appeal to me, specifically both of the Undead armies as well as Ogres. In a bid to get me into Fantasy my friend Nathan gave me the mini rule book, the Ogre army book and a box of bulls to get started. Through some wheeling and dealing I also managed to pick up a couple characters, a Stonehorn and a battalion. I did up some test figs and posted the picks here last year. Then GW goes and discontinues all the paints I used to paint them with. So I had to start again (pics below). 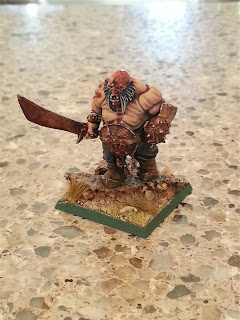 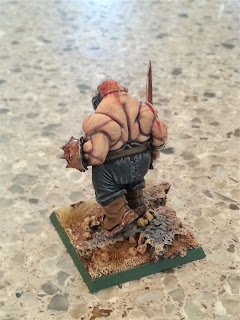 These are some pics I took with my phone before I got my light table set up. Overall I was really happy how he turned out, Even used a bunch of new techniques that I was pretty stoked to get skilled with. Then it donned on me...I *hate* the actual game. I just can't get excited about playing Warhammer Fantasy. I know the rules have gotten much better but its just the game's style of play. Moving around a bunch of boxes, being super limited in how you move, etc. just 100% doesn't appeal to me. So despite that I like how this guy turned out, I ended up selling literally everything I own for Fantasy. So with selling my Ogres I have trimmed down the models I own to JUST my Tyranids, Necrons, Dark Eldar and Eldar and unless something totally crazy happens I will probably just stick with this armies for the near future and just keep adding to them.


Are there any projects you have tried starting over and over again and just couldn't get them off the ground?
Posted by Ghoulio at 6:46 AM

I have a ton of Imperial Fist stuff for a pre-heresey army that I just can't get around to doing, likewise for a Grey Knight with an Inquisitor Storm trooper force. Then I have all the 15mm stuff that I'm actually working on Germans, US Paratroopers and Desert Rats. I'm just in a bit of funk with painting not really interested in doing any of it.

My Black Templars haven't been started (except for a 5 man "experiment") and are still in all their nice boxes back in California.

My 15mm Carthaginian army is mostly done, but the Gauls just don't want to be painted to finish it.

15mm US paras got started but not finished.

Warmaster 10mm Fantasy I brought a couple of starter boxes with me to NY, but haven't cracked 'em yet.

Warmachine has slowed down in recent months since the Errant models are just too detailed..