Something Old, Something New...

Now that the new Eldar book is out the mass re-basing of my entire army has started. I am going to work my way through my basic foot troopers, then through everything else. The nice thing is I have already finished my flying stands for most of my skimmers as well as the flyers. I am also slowly updating the models in this army and doing my "revised" colour scheme mostly due to the fact that none of the paints I used to paint this army originally are still around so I had to change things up considerably. The main things I want to update now are my Wave Serpents as I straight up *hate* the old Forge World ones. I already have one of the new Serpents and I will be getting another one shortly.

So back to the re-basing! Here is a pic of the original Guardians from the 2005 Grand Tournament I attended in Montreal. As you can see they are still VERY 3rd ed with the Goblin Green bases *shudder*. *cant believe I did ALL my bases for all my original armies with Goblin Green. This army fared the best since all the others had Goblin Green gravel too lol (yes, including my Necromunda figs...sigh)*

And here is the pic of the first half being totally re-based with the new style. 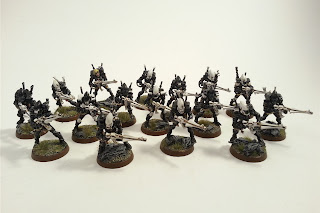 The brown rims, grey rocks and the more subdued green/brown grass works considerably better in my eyes with the overall colour scheme of the army. I also really like the fact that with the addition of the "rocks" (just wood bark) I can really change up the heights of the different models which again adds a bit more visual interest. Once I get the Warlocks and weapon platforms finished I think they will look really good.

In addition to updating everything I have also managed to do some trading and I have picked up one of each of the new flyers (freaking LOVE the model, cant wait to paint them), a box of Wraithguard (again, fantastic figs) and I am hopefully getting a Wraithknight soon as well. Feels good to be finally giving this old army some TLC and updating it since it's been sitting in limbo since 2009 when they participated in their last tournament.

Up Next: It's all about Eldar and Trolls. Working on both more or less at the same time but due to the excited of actually having a playable Eldar army again they will probably get the edge lol. I also wanted to talk about my thoughts (NOT a "review") of the book in regards to how it works with a themed Ulthwe Army. Good times!
Posted by Ghoulio at 6:49 AM

Looking for the Best Dating Site? Create an account to find your perfect date.