I don't normally post work in progress shots, especially not shots of model building unless there is a major conversion but I just have to show this guy off. I remember seeing that the Wraithknight was coming out and just assuming it would be $100 Canadian just like like the Riptide so naturally I was outraged when I saw it would be $140. Now I finally get it as this kit is freaking MASSIVE lol. In pictures you just can't grasp the scale of this model when compared to everything else so I threw in one of the new Wraithguard and a Guardian on his base just to show off his size. 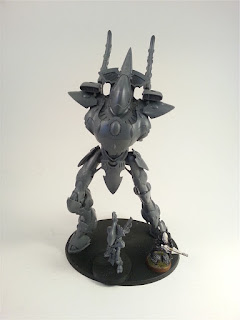 This is the Wraithknight at about 4 hours of work and at this point I still haven't touched his arms or his base. It took another hour to build his two Wraithcannon arms and I am hoping to start the base shortly as well. I am leaving him in pieces (legs, body, head both arms) until I get those pieces painted as he is just way too large to paint all in one shot without an airbrush. This weekend I will start painting him and I will take WIP pics and post them here.

I have also picked up a Crimson Hunter, Hemlock Wraithfighter, a box of Wraithguard and 3 Heavy Support Weapon Platforms. As I showed earlier I am also working to update the bases for this army and hope to finish off the rest of the guardians this week (sigh..another 18 to go of just Guardian Defenders plus another 11 Storm Guardians). Other then picking away at Warmachine here and there bringing my Ulthwe Eldar up to the standard of my other 3 main armies is going to be my priority until its finished. Should be fun! lol