Fear and Basing in Las Vegas

Ghoulio has been giving me crap for ages about how I need to base my Warmachine stuff.  There is a reason I have up until now not done it. Fear.  Fear of screwing up my carefully (and slowly) painted figs with a crap base job.  Back when we started this nonsense, everybody used to use bright green flock.  Everybody was apparently fighting on a golf course.  I even flocked my Tallarns this way for YEARS (http://legiominimus.blogspot.com/2011/03/vendetta-ogryn-chimera-and-tallarn.html).  Then I realized that the days of flock were long gone.  Happily it was relatively easy to fix them (http://legiominimus.blogspot.com/2011/04/tallarn-110th-redux-battlegroup-ptolemy.html) by simply painting the flock like dirt, throwing on a couple of stones and bob's your uncle.

But with the Protectorate, I wanted to go further.  I wanted the rocks to sit IN the dirt and not just sit on top of it like pebbles.  I also wanted to try my hand at static grass, something I haven't used before.

So to get over my fear, I decided to do test basing on 1 unit and make sure it looked fine.  I have chosen my Wracks, for no reason other than they had nice big bases with lots of places to try things out.  Below is a step by step of what I did. 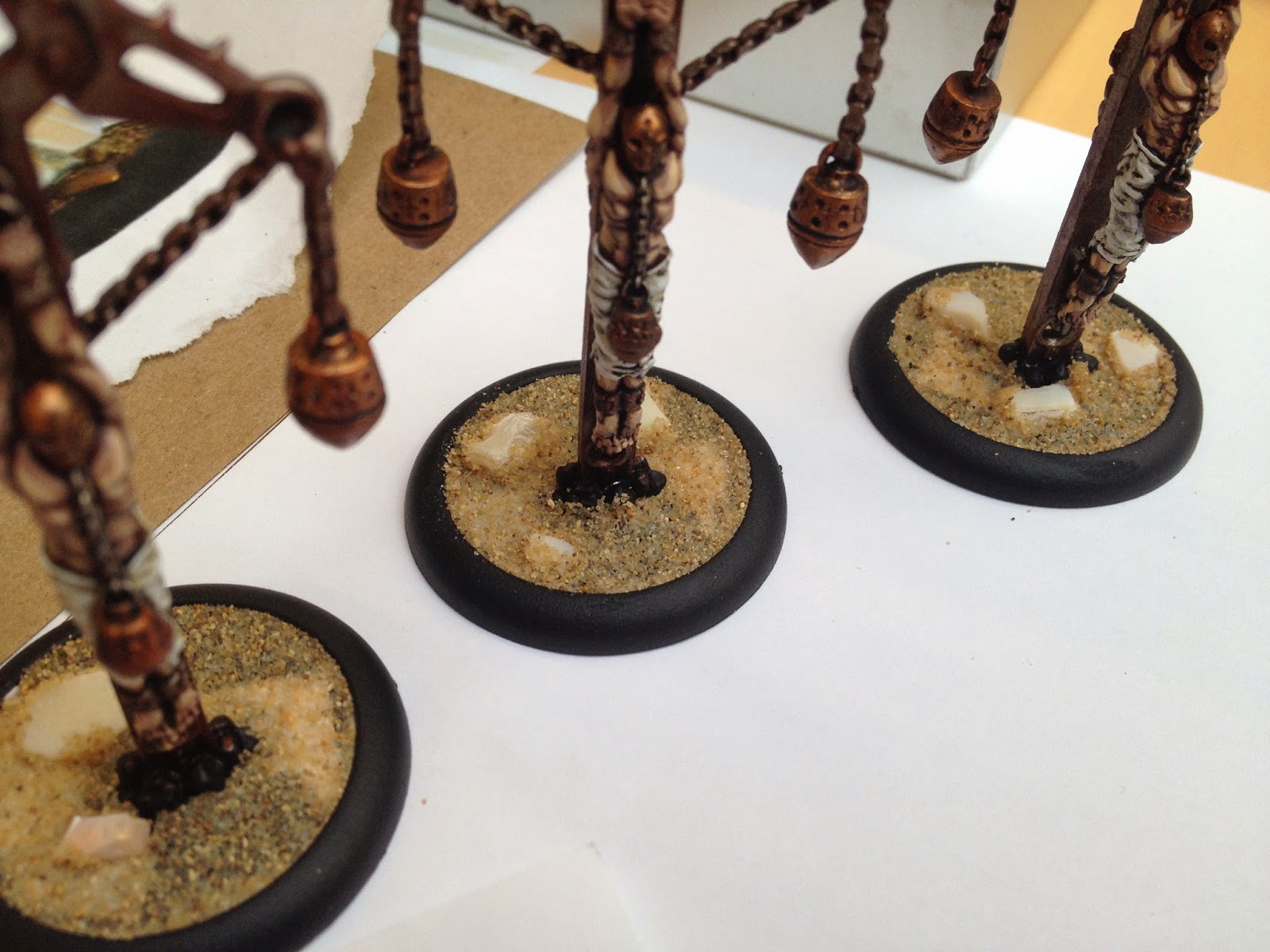 Here you can see first glued on the seashell rocks onto the base, and then put on some fine sand, the idea being that the rocks would "protrude" out of the ground a bit.  This *kind* of worked, but the rocks still looked like they were sitting on top.  So I put down a second layer of sand.  This worked, but almost too well.  Now the rocks were buried. Not a bad look, but I think next time I'll angle the rocks so that part of them sticks out and the other part is under dirt.  Something to try. 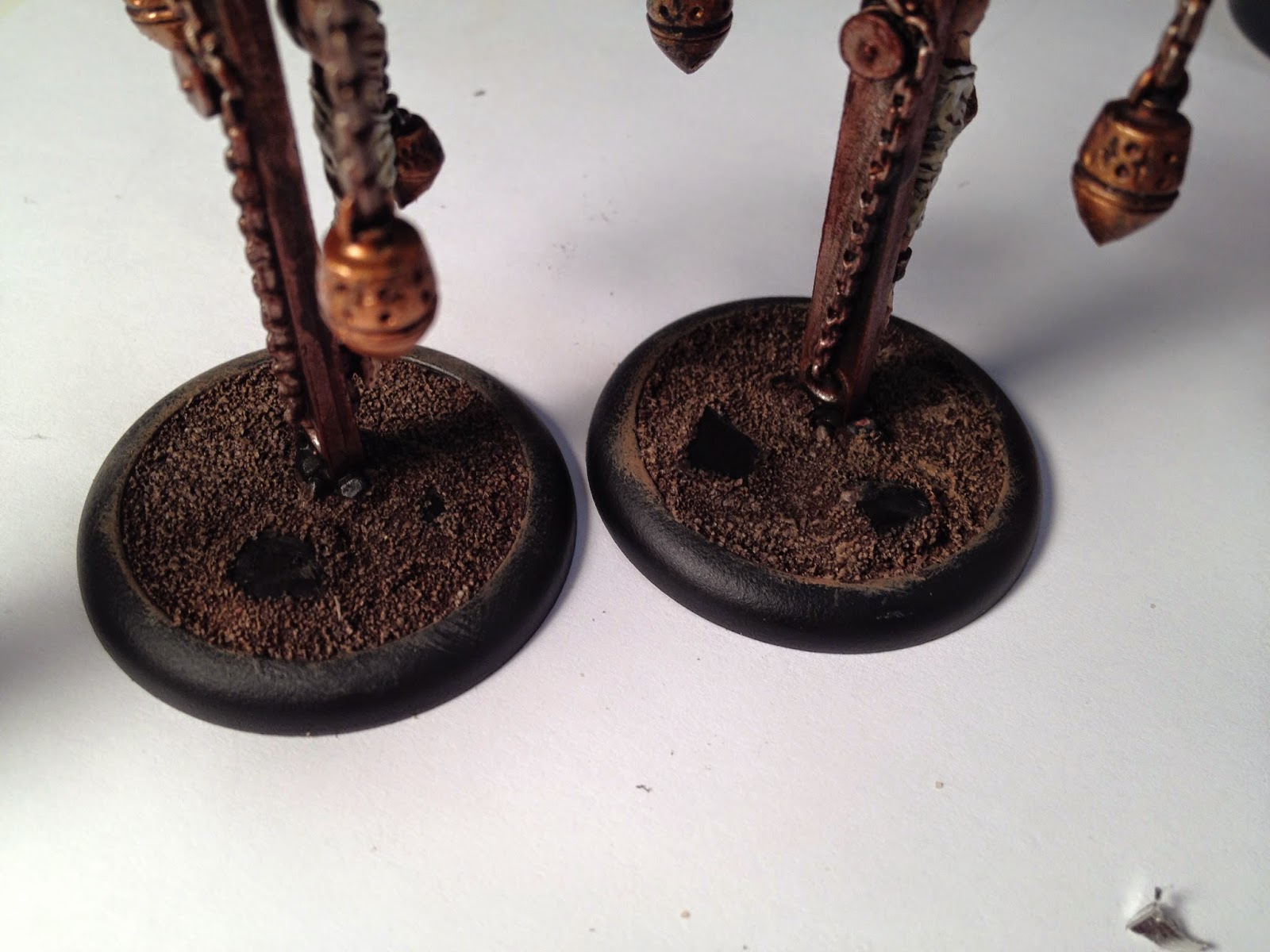 Painting the entire thing black, and then painting the bases bestial brown, followed up by a leather lighter brown for highlights seemed to work. Well.  I followed this up with a very light drybrush of light tan.  I wanted the dirt to look like dirt, and not sand like I did for my Tallarns. 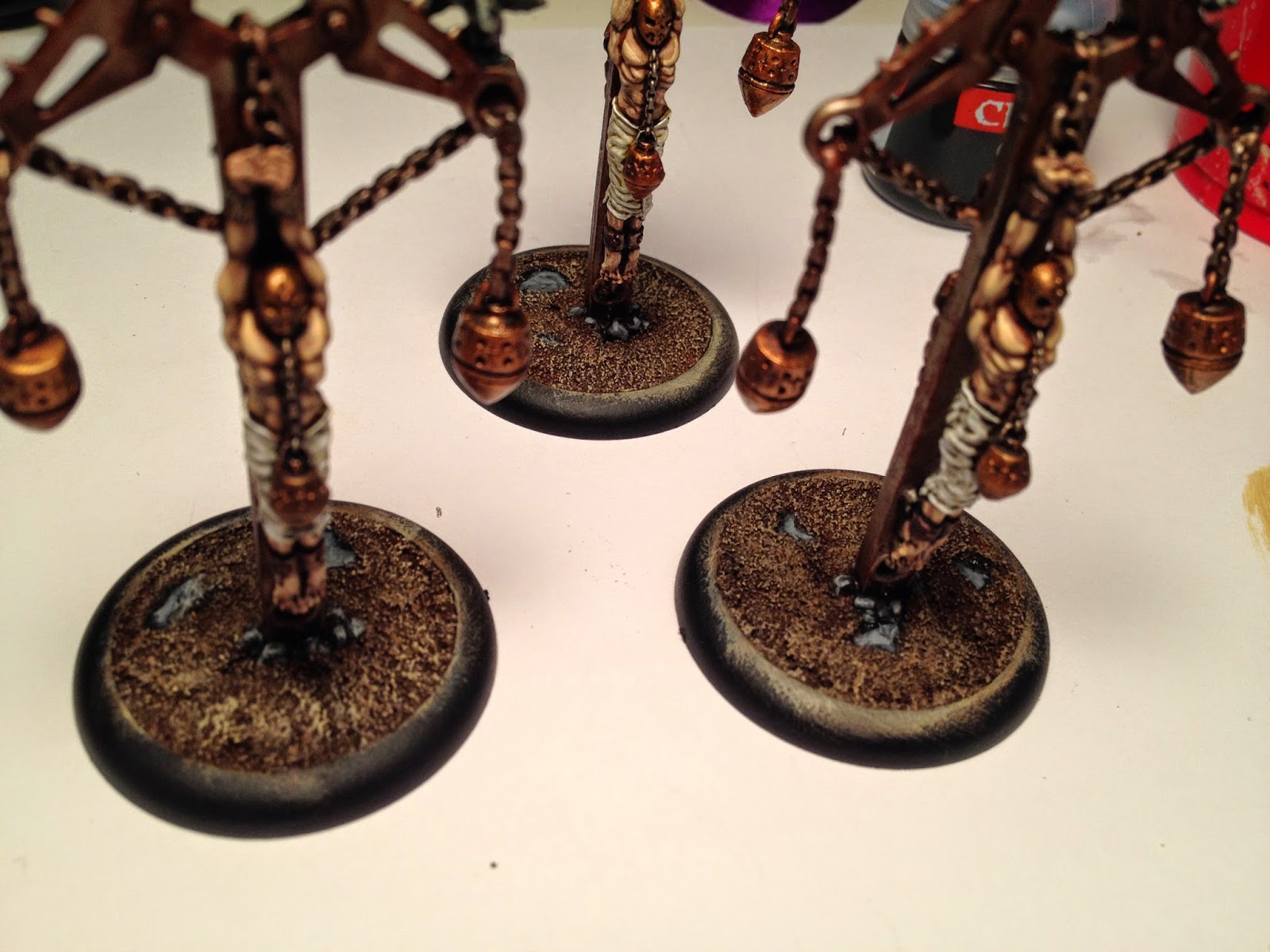 The next step was to highlight the rocks.  Using Adeptus grey as the initial highlight and then Fortress grey seemed to work well.  Of course GW seems to change their colors every year or so who knows if these colors are going to work.  Black + dark grey + light grey.  Boom. 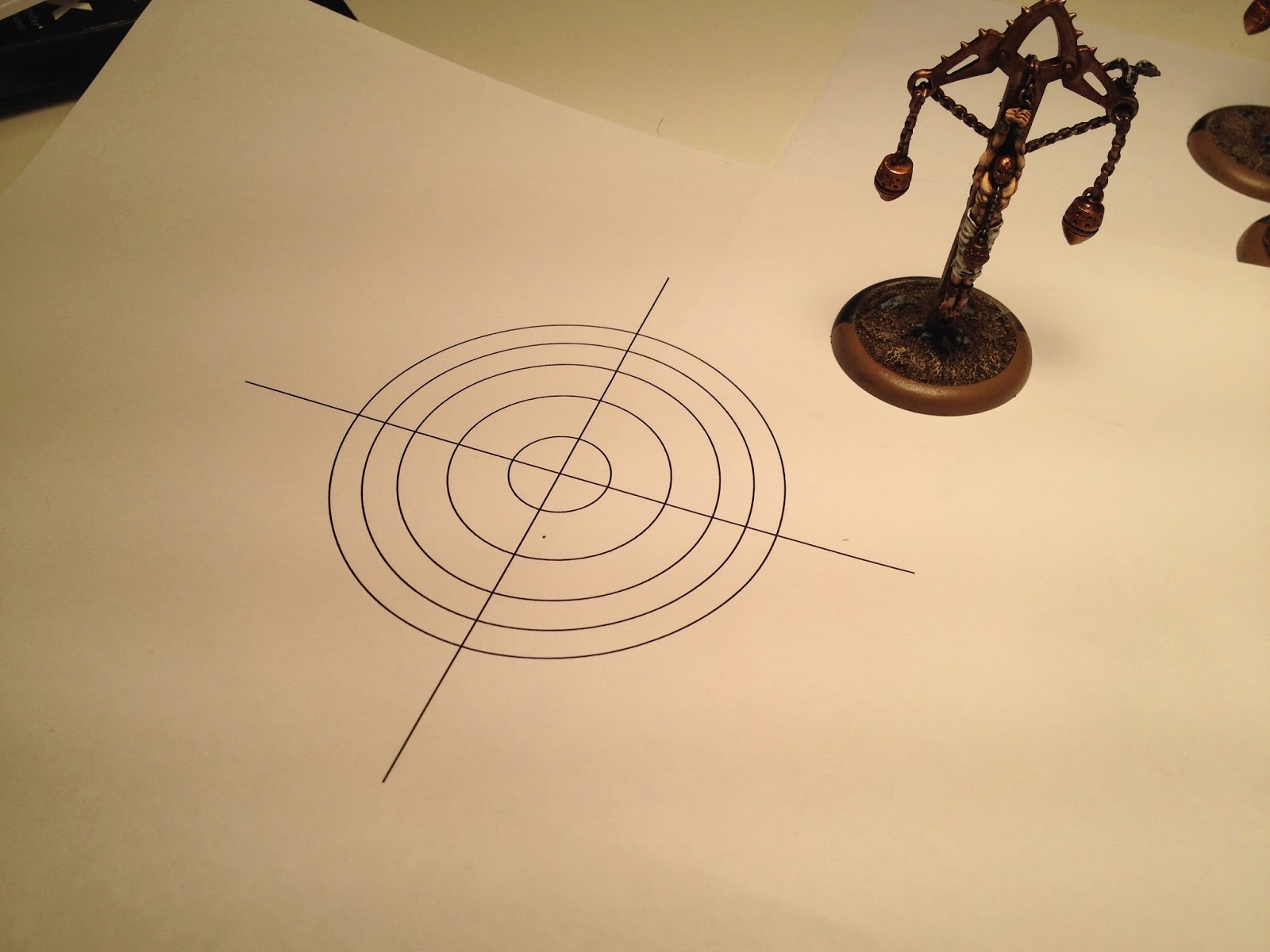 Seeing Ghoulio's awesome white lines to demark the front and back of figures, I decided to copy this.  But I was worried that I would screw up marking the "half way" point, so I printed off a bunch of circles and marked with pen the appropriate line. Worked quite nicely I thought. 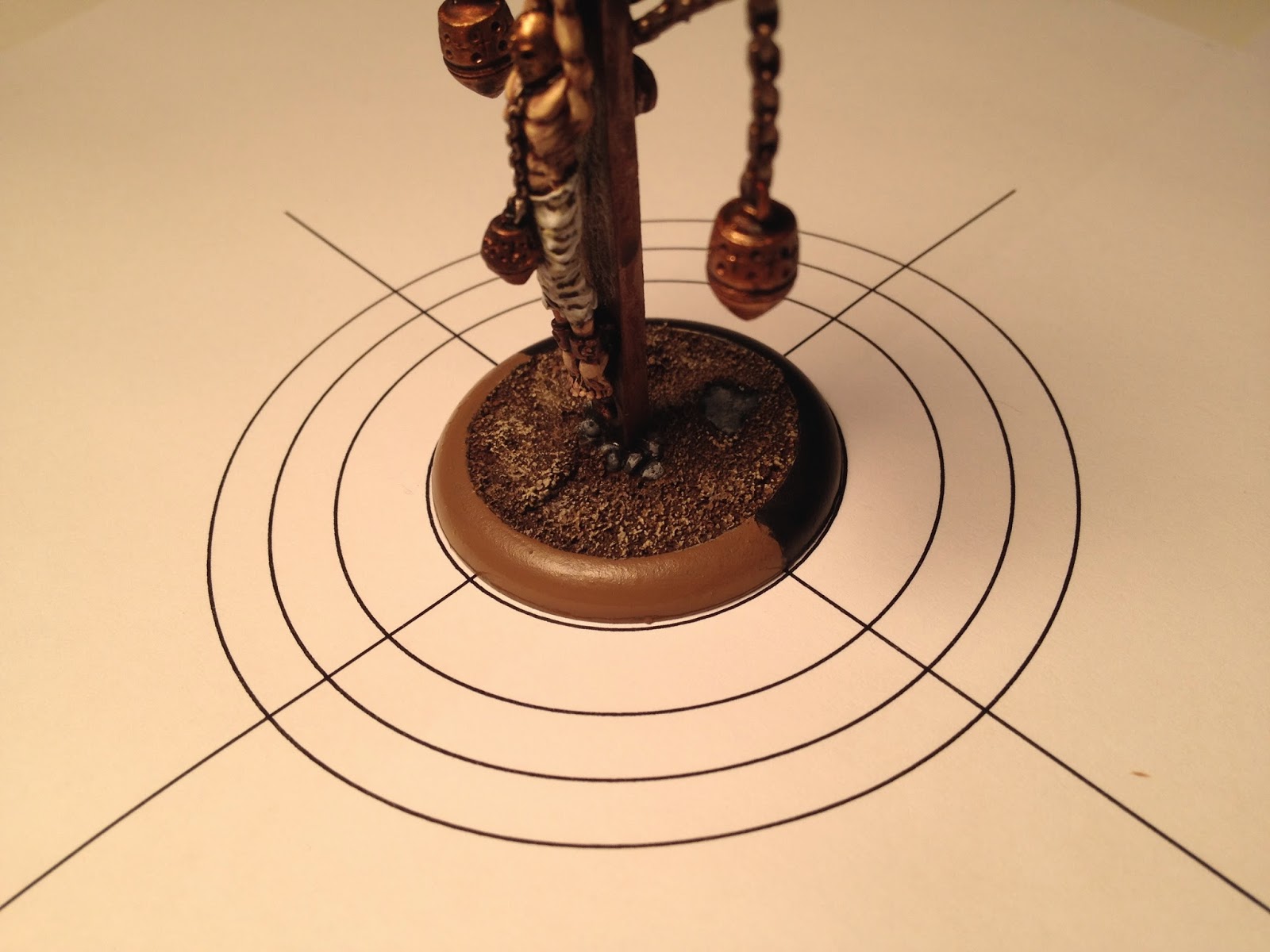 Call me a spaz if you like but it worked nicely, and this particular group of circles will work for all my figs. 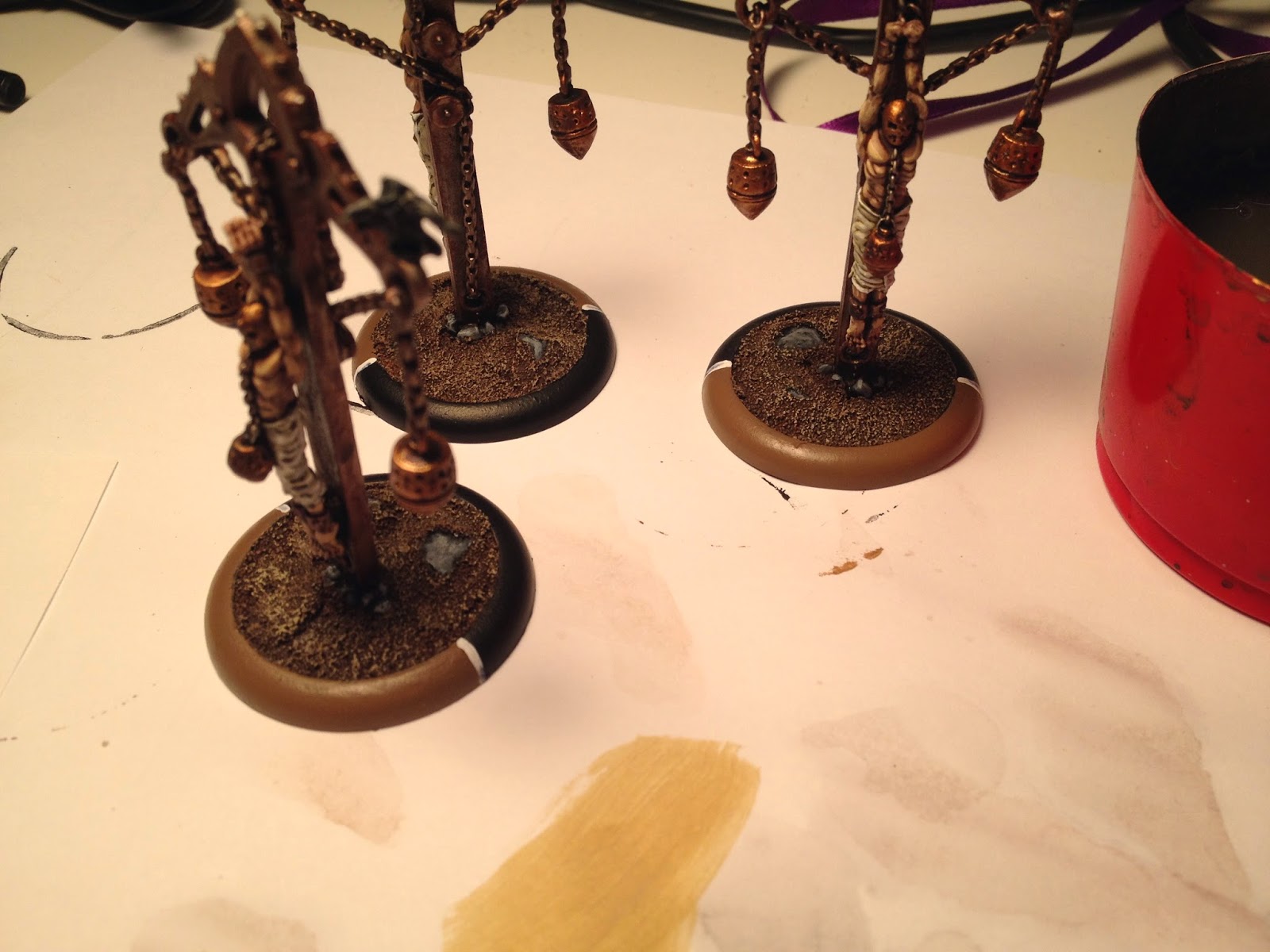 So now everything was ready.  I dull coated the models NOW, as I've heard that static grass doesn't like varnish. 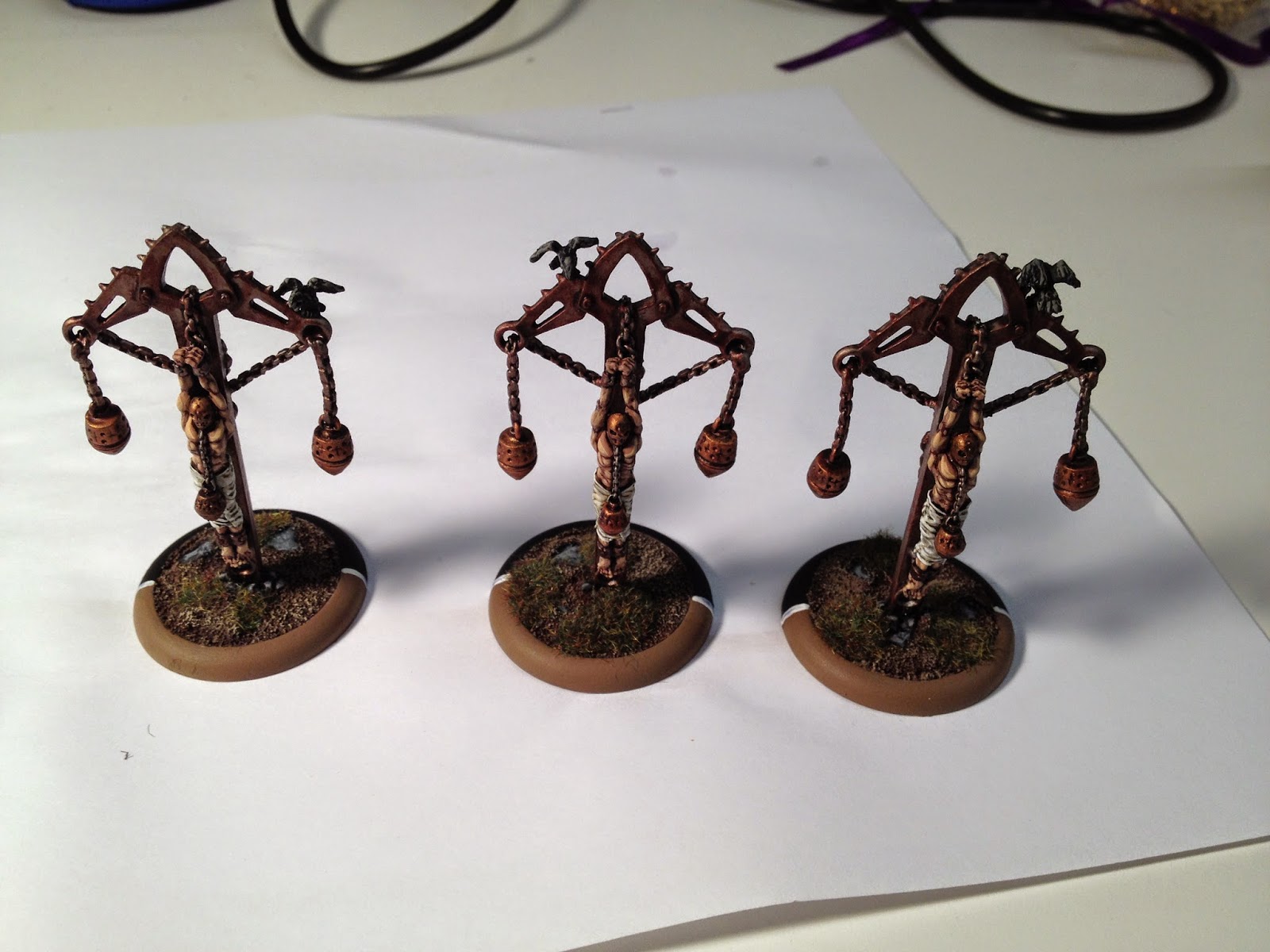 Using the "small dabs of glue" and really mash the grass onto the base with WAY more grass then you're going to use.  Press it firmly with your finger and shake off the excess.  It worked out perfectly. 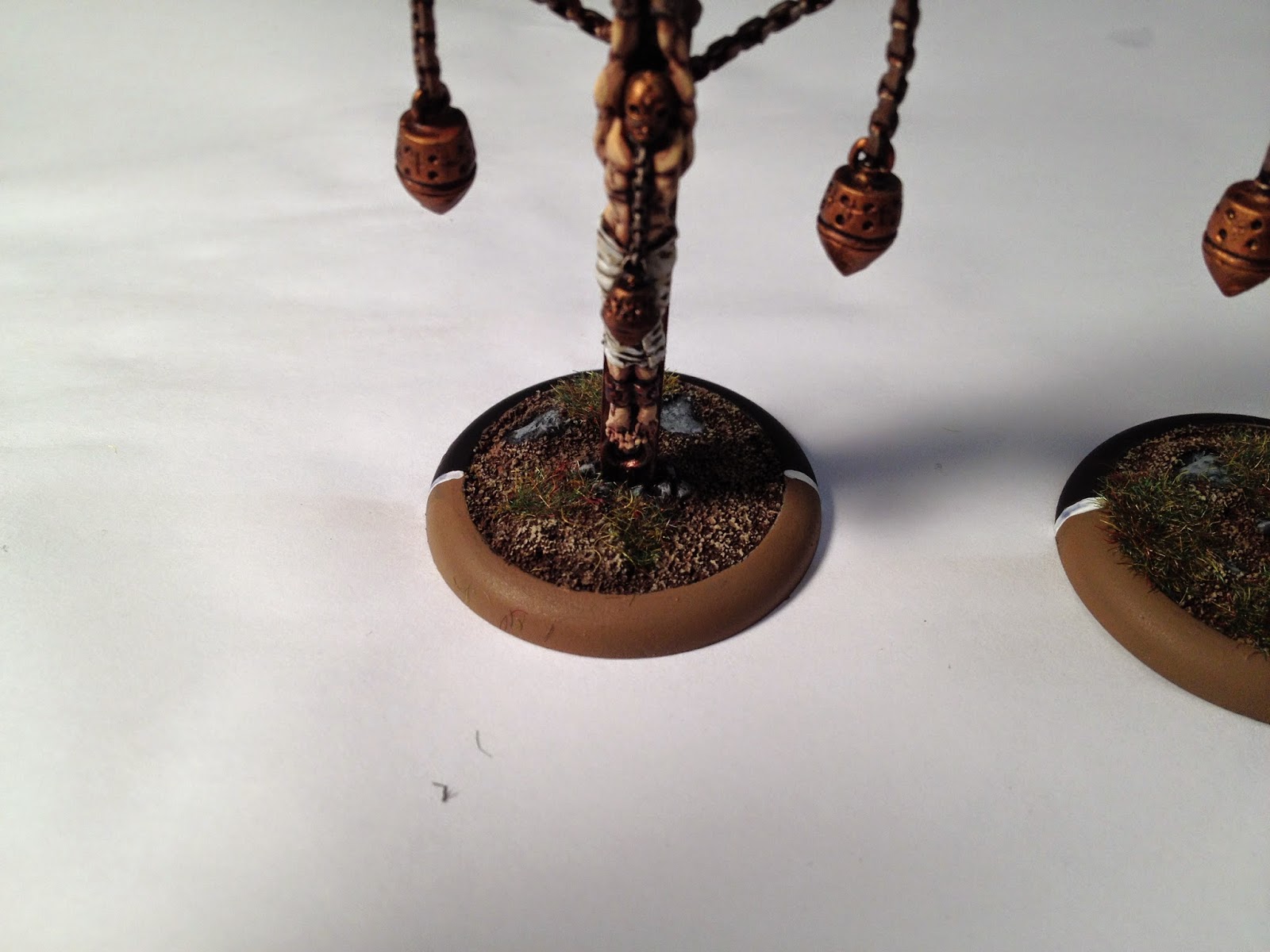 The only complaint I would have is the grass looks a little dark (especially in these photos), so that leaves me with a dilemma. a) Use lighter static grass (I have golf course green as well), or b) highlight the dirt more so that the grass has more contrast.  I think I'll go with b).

Either way, since everybody except the Big Kahuna (Judicator), and a few other solos is done, I'll start basing this weekend methinks.  The fear of static grass is gone!
Posted by greedo at 6:39 PM

I'd mix the grass types. It will provide some pop of color, and mix in quite nicely.

Plus you can place it before gluing, to see if it looks alright!

Bases look great. I always had the same fear. I solved my problem by painting the bases separately, and transferring the models over!

Take a bit of bone colour and just highlight the tips of the grass. It pops really well.