So I went out and bought a Leman Russ Turret (Demolisher) on eBay about a year ago on the theory that I could convert one of my existing tanks into a 2nd Demolisher..

There were two flaws with this plan:
1) I like the Vanquisher better than the Demolisher and probably should have bought a Vanquisher turret instead.
2) The turret ring of the new GW tanks is completely different from that of the older tanks such that they don't fit together.

Happily, I found a way around the problem. 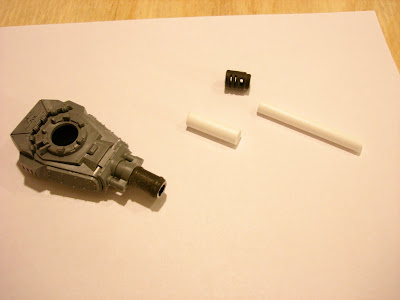 This is the parts I had. I cut down the Demolisher turret, and a spare battle cannon I had laying around. I also have 2 styrene tubes. One of the same diameter as the battle cannon's barrel, and one that is *just* smaller and fits inside the larger one. 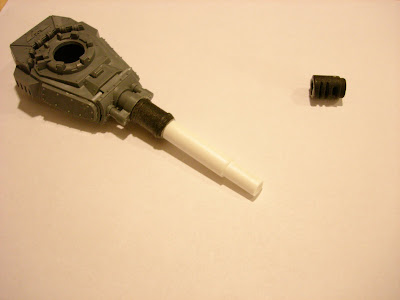 The glue acts as a filler so that any bad cuts I made on the tubes are covered up. 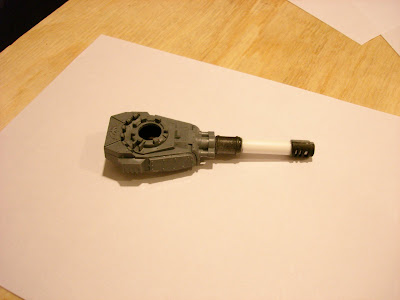 The smaller tube is so that the tubes all line up correctly (I tried without it, and the barrel looked crooked. NOT badass at all). The length of the styrene is based on a measurement I did of the Vanquisher vs Leman Russ tank diagrams in the Imperial Guard Codex. 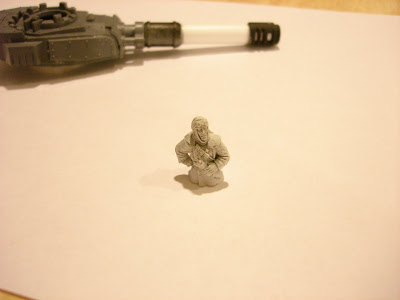 This is a shot of the Forge World Tallarn Tank commander I've had laying about for a while. I plan on putting magnets under his base. He can then act as Pask, a special IG tank commander to the Vanquisher OR as Al'rahem. So that will be a 3+ to hit that pesky Land Raider at the tourney, and a 2D6 + 8 Str hit. I'm hoping it will KILL it, as I hate those Land Raiders, I really do. Alas this tank probably won't be in the tourney as I have other stuff in prep right now, but I figured it was a good time to getter done anyway. With the magnets I can give him some nice legs (maybe a plastic Cadian trooper) to be Al'rahem as the current miniature of Al'rahem is AWFUL. But what happens if I want Pask AND Al'rahem...? Probably won't have that many points anyway.. 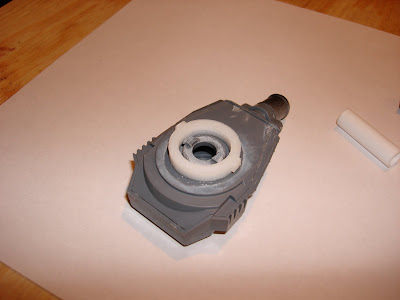 I had to cut down the original tank ring, and replace it with my own custom plastic one. This ring was made by an FDM machine at my work. It basically will make any 3D shape you like in plastic, and it took 10 minutes. So with a pair of callipers and Solidworks, I created this, and glued it onto the underside of the tank turret. For comparison you can see the original (much smaller) turret inside the custom one. 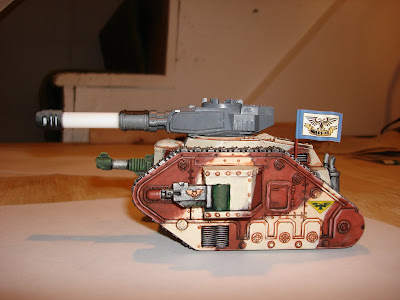 My measurements were a little off, and this turret required a bit of paper shim to keep it level. I shall add real shims in due course, but at least you get the idea. 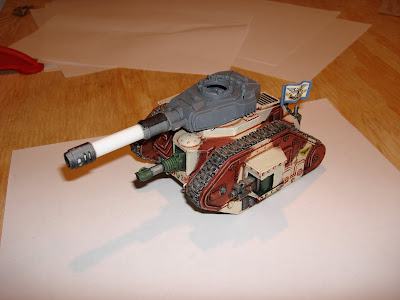 I'm quite proud how this turned out especially since its been on the back burner all this time. 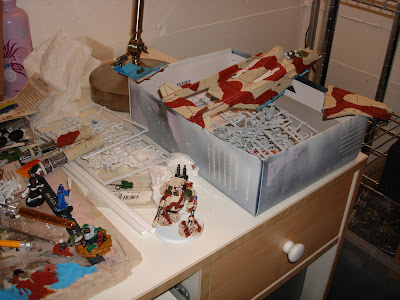 And just in case you think I've been slacking while Ghoulio and Big Willie have been painting up a storm, here is a shot of the stuff I've been REALLY working on. The Valkarie/Vendetta is coming along nicely although I recently had to tear the engines off because I couldn't paint the top of the fusilage easily. Outlining it is also a pain but worth it I think.. You can see the underside is done is sky blue (the upturned wing), and the top in my Tallarn Camo, so he'll match the rest of the vehicles. I'll keep all the doors closed, but they can open technically if I really want to. I'll also leave the wings off so that I can take his baby in my foam case. Also finished and ready to be based is the FW Sentinel (lower center of pic). The Ogryn Chimera turret is mostly based coated, and I'll paint him properly soon (lower left) as well as the Commissar and Astropath that I paint while waiting for the Valk to dry.
Posted by greedo at 7:00 PM

I really like the conversion, looks awesome! Looking forward to seeing the Valk, "Lemon" Russ and the Chimera with the Ogryns finished ;)

Pretty pumped. I'm fracking slow to paint stuff these days. Want to make sure I'm good to go with the tourney this year.. And want to paint some more FOW etc.