That was an interesting tournament. It had its ups and downs. First of all, here's our venue, the USS Hornet Aircraft Carrier in Alameda, CA. Awesome stuff. 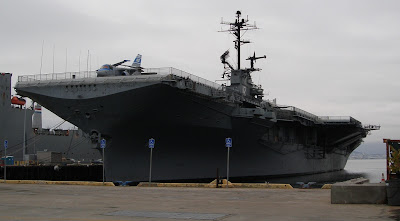 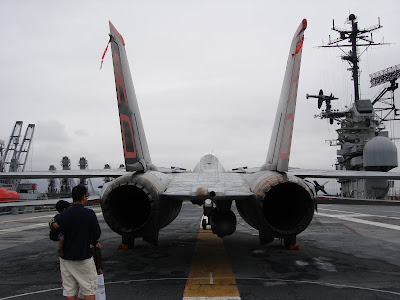 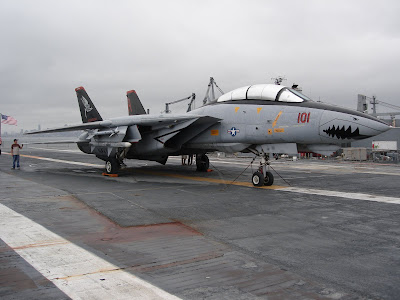 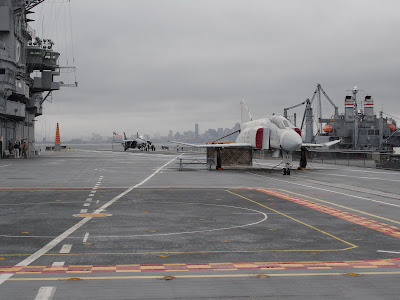 No we weren't on the deck but I was able to sneak up there on Sunday to see what they had. An F-4 Phantom, an F-14 Topgun Tomcat, and ... I think a Skyhawk or a Raider. I forget which. Its at the front on the steam catapult if you can see it.

But enough of that. Down in the storage hanger, we did battle...

Battle 1: Orks.
Highlights: Playing against Orks for the 1st time. Some REALLY cool conversions and builds. This guy actually won player's army choice at the end, so I was glad I got a good up close (too close) and personal look at it. A really cool Godzilla theme. Also neat was that Orks are an even crappier shot than my IG, so it was a nice change... until they got into H2H with me.

Lowlights: Well... I wasn't as aquainted with the rules as I thought. The guy was very understanding and nice, which was cool. But it was really hard to figure out how to defeat a battlewagon with an invulnerable save and a pile of orks around it. Also hard to know how to defeat motorcycle nobs. They are just plain complicated and kind of cheesy frankly since they can put wounds on each individual model etc. etc. Either way, I got kicked to the curb.

Lessons Learned: I need more horde control? Learn the rules AND play a game or two BEFORE attending a tourney. 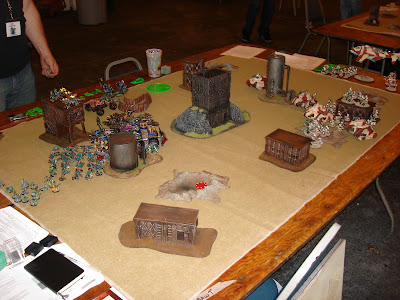 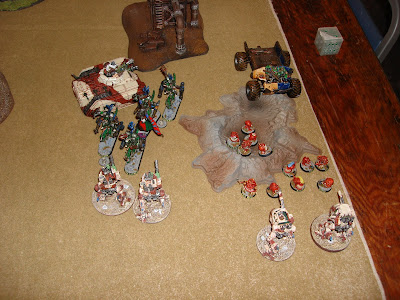 These squigs are in fact boyz in the buggy. Cool idea I thought, and he was true to fluff and didn't shoot them once! Also notice those accursed Nobz. I didn't know how to unload my Ogryns properly for the all important charge, so they did crap all, as did the flamer. 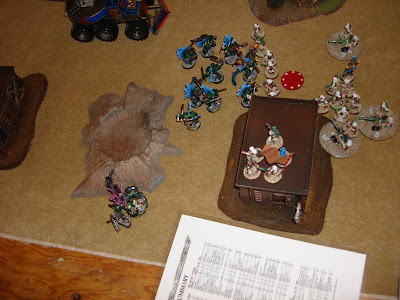 What happened to that lovely blob of 30 infantry?

Game 2: IG Vendetta Squadrons of Death!
Hightlight: Able to play against another Guard player so see what he was going to do. Also a nice player.

Lowlight: The entire game. This was the lowpoint of the tourney actually. The guy was nice enough although he was a bit snippy about bases. Really cool paintjobs on the Vendettas though.
My army started getting blown to crap, and I after turn 2 I sat there wondering if my poor little army that I'd spent so long painting was going to be able to do anything more interesting in this tourney than just die. It was to the point where my army took more time to setup than it did to get killed. We can't shoot, we can't assault, we can't move... If the rest of the tourney was going to be like these two games, what's the f*@&$ing point of me playing 40k? I obviously don't "get it", and never have... blahdie blahdie blah.

Lessons Learned: Don't shoot with Ogryns if you are about 4-6" inches away or you may not be able to charge if you gun the front row down. Also, after speaking with the guy afterwards, 2 Valkarie/Vendettas might be useful. Vendetta is dedicated gunship. Valkarie carries the veterans to deploy. 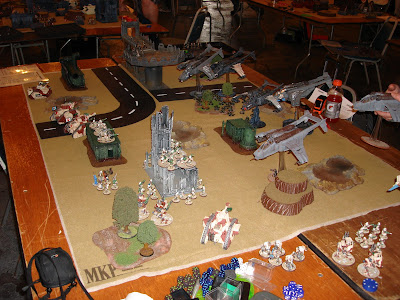 Holy crap! 6 Vendettas and a whole pile of melta guns! 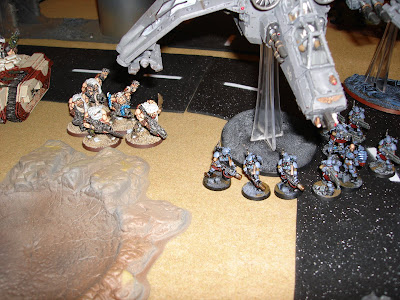 The Ogyrns exit their burning wreck of a Chimera to shoot ripper guns at those juicy veterans. Alas they were too effective and shot them out of charge range! A good lesson there. 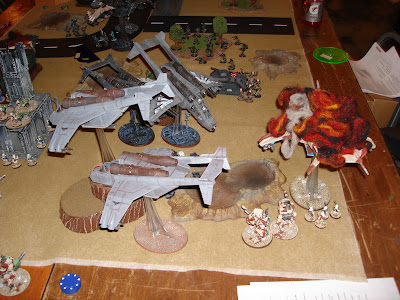 Oh dear. That fact that he insisted on putting lots of flame on my vendetta kind of ticked me off, but I tried to keep smiling. 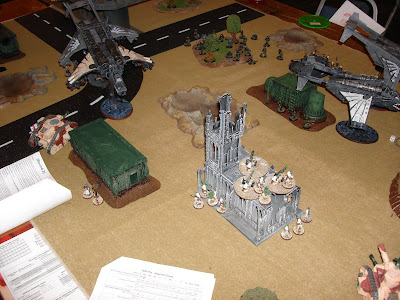 Game 3: Gray Knights
Highlights: Best game of the tourney. This guy pulled me out of my funk from the 1st two games. We voted each other most fun player. Again I got blown to crap, BUT NOT TABLED. I actually make this a 6th mission for the tourney. I did not want to get tabled by ANYBODY no matter how badly a lost points wise. I look forward to playing this guy next year. I really hope I can make it. We pronounce this game "the party table" since we were both 0-2 and sure as hell weren't going to win any prizes. Just there to have fun. Oh, and my battlecannon missed and blew up my entire platoon commander. We high fived on that one as a sign of how fun the game was.

Lowlights: Well I was a bit tired, and sat down. He noticed and shouted "don't get down on me Chris!", and I realized. DON'T SIT down at a game. It lowers the whole energy level of the game. Even if you are tired, it just looks sh&@#ty.

Lessons Learned: Gamewise, was still getting used to flank moves with the sentinals and vendetta as well as how to charge with Ogyrns. They got eaten again. At least I killed his librarian. Also, terrain is really nasty for Guard. All the tables were terrain heavy and those cover saves KILLED me, since even my lascannons and battlecannons were less effective. 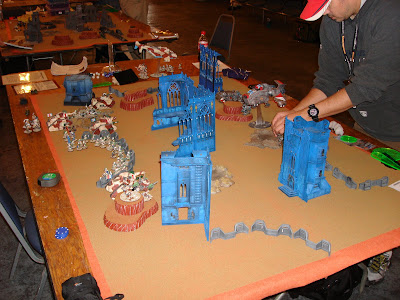 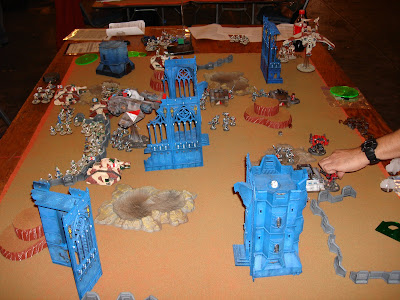 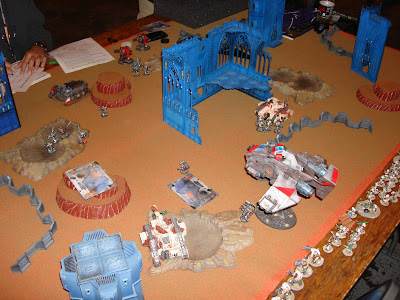 Day 2. Game 4: Blood Angels
Highlights: The guy was really nice. He voted me his move fun player, which I appreciated. My Ogryns were running defense in the back row ready to try to intercept/counter charge an assault marine deep strike. They were too far from the objective though.

Lowlights: I think he took the true line of sight thing WAY too far shooting through 10 jungles and 3 units to try to hit my LR. Yes you can do it, but come on... He took me to the cleaners as was becoming usual (but DIDN'T table me. SUCK IT!) I still don't know how to handle Assault marines. Especially super hero Blood Angels. I also couldn't hit crap. I think I killed all of 1 unit the whole game. Things were threatening to repeat themselves from the previous day. But I kept smiling, because I'm here to have fun...... kind of.

Lessons Learned: Instead of holding my blob back where they would die, I decided to run them forward. This actually worked well.. except that his assault marines then dropped in behind them.... So perhaps not for this game. 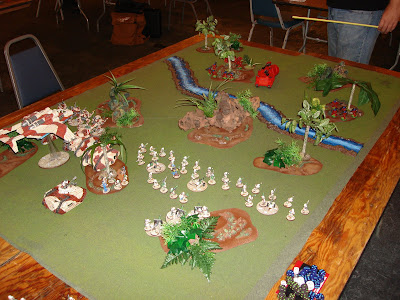 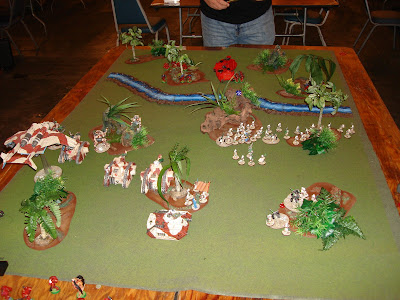 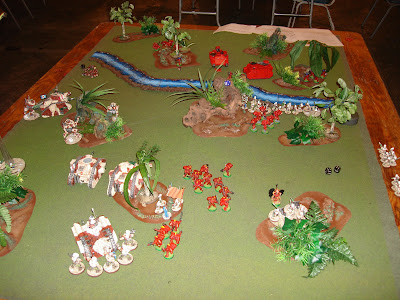 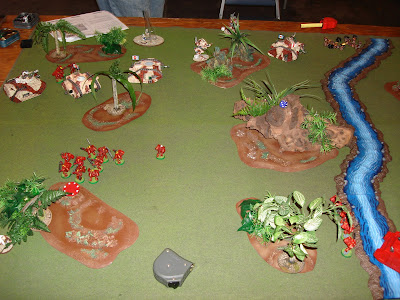 Highlights: This was a fun game actually. The guy and I had met on Saturday and were looking forward to gaming against each other. Sure enough I was 0-4, he was 0-1-3 so we were fighting for the bottom. I'm happy about this one because I was able to pull off a TIE. The mission was to get your scoring units into the opponent's deployment zone.

Lowlights: The guy was a little silly with the true line of sight, but not really any lowlights. I felt like I had a chance with this game, and that really helps to make it more fun. Nothing sucks more than thinking that your army has no chance. My luck was SHITE this game, but that's ok.

Lessons Learned: Eyes on the prize. My blob just said screw it, and ran forward. The order "Move move move!" REALLY helps with this. My lascannons sat on a hill and hit zero. My vendetta swooped in, and tried to pick up both the senior and junior command squads to take them to the deployment zone for a win. The other guy only had a couple of scoring units so it was fairly easy for my Ogyrns to run interception (Which they ROCKED at). This guy was my skill level. Although his army wasn't painted totally, I voted him my player's choice because I'd already voted on my favourite player. 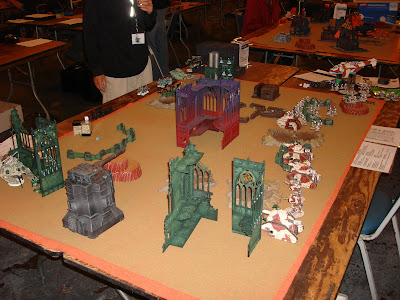 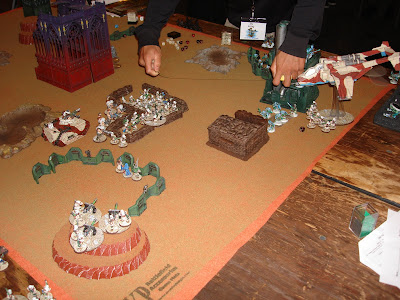 The blob moves into cover. They keep running. Next time I'm not taking any heavy weapons with a blob. Maybe I won't do a blob again. Time to paint up those Chimeras and melta guns... 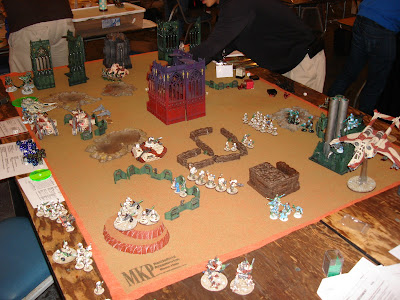 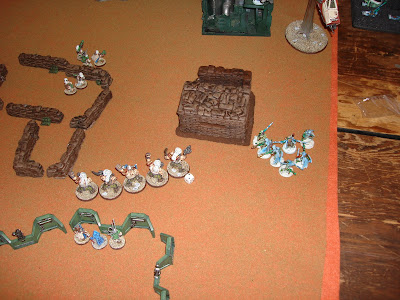 Conga line of Ogryns running interception on those eldar. We sent that Warlock packing. Go Ogyrns. Pity their Chimera got a track blown off in the opening turn. 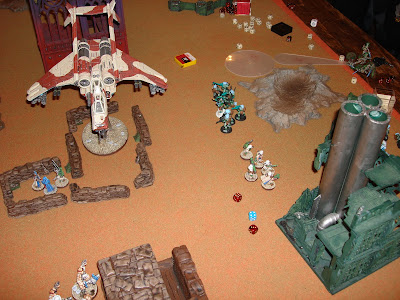 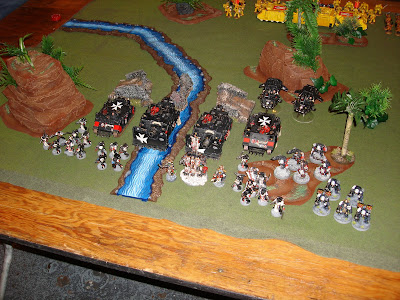 Really nice guy's Black Templar army. Met him at the beginning. I didn't get to play against them, but if I ever get to paint my BT, I'll look for him.
Posted by greedo at 9:04 PM

It was pretty sweet. Although because it costs quite a bit to get the carrier, prizes were less than they otherwise were. But heck, can't beat the location.

I was at the event as well (I had the green cadian IG army) and I loved your paintjob. Of all the armies yours looked the best IMHO. The Ogryn chimera with the "turret" was amazing!!!!

Thanks Sean! As one player out the in parking lot told me, "it never ends with the guard", so I guess I'll be painting my stuff forever!
It takes a while for me to paint stuff, so I hope my army can be viable.
Was yours the one with all the rocket launchers (and the death strike!)? Or the mechanized chimera one? The all clan escher infantry group was cool too. I was very pumped to see I think it as 4-5 guard armies out. I was expecting lots of space marines, but it was quite a diverse group.