This a bit different, but this is the fantasy blog, so here's my time at Pacificon 2011. Lots of fun.

First up, all the games I wanted to play got cancelled, so I volunteered to help out my buddies run the Battle for Pelennor Fields.

We started at 7:30am to setup. Started at 9am, and we ran with a couple of breaks until around 7pm.
IT was INTENSE. I dreamt about it that night and I think we'll be leaving WOTR alone for a while now.
Rohan came in, then Gondor, then 5 Mumaks(!), then the dead.
Evil JUST won by killing enough points worth of figures. 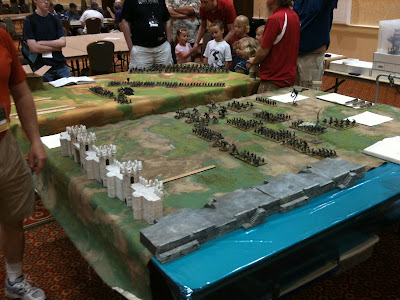 The field of battle. Rohan just showed to steamroller the orcs in the way...
One thing to note when looking at this table. There are in fact 2 TABLES! The gap in between is so that we can move between them and move figures around easily. In reality, that gap isn't there and two tables are next to each other. So you can see Rohan in the back.. The orc horde with 10 Trolls, catapaults, ballistas etc. is facing the walls. Gondor is about to sally forth out of the city to fight them (Sieges are dull for a con game). Note the river. I wonder what's going to come out of there in a few turns time.. 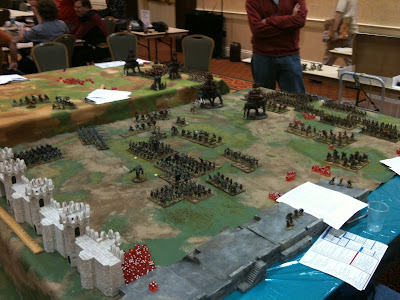 The Mumaks showed up. I commanded a few of them a bit (filling in for players that came and went). I also commanded a whole division of Easterlings and fallen realms. 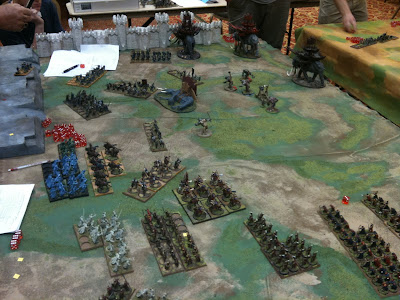 We even had dead Mumaks when they fell. Only 1 was lost. You can see it in the middle. Also, the dead have just come ashore to kill evil. I was sneaky though because I'd seen the movie, and lined up my Easterings to receive the charge... The dead aren't actually all that good when they aren't attacking the Mumaks (and they never got the chance). 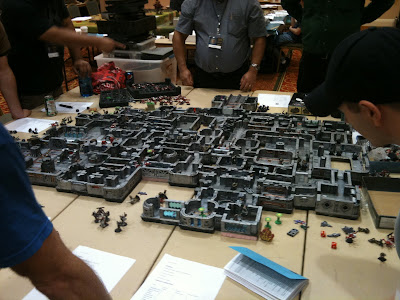 This was neat. A 3D Space Hulk multi player game being played next to us. Cool terrain. Totally home made, and the guy was selling it too (I didn't buy).
Posted by greedo at 11:44 PM