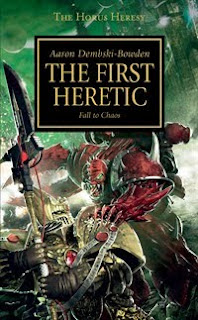 I just finished reading the latest instalment of the Black Library New York Times best selling series the Horus Heresy. I can honestly say that I thought is was the best book yet! This is the first book that I've read by Aaron Dembski-Bowden and I will be picking his other books up shortly. I won't spoil the book for anyone that wants to read it but basically it tells the story of the Word Bearers and their Primarch Lorgar Aurelian from about a century into the Great Crusade until just after Istevaan V.
Some of the cool points in this book are; It is the first that that we see the Legio Custodes (besides Valdor) play a larger part of the story. This is the second time that learn a first founding chapter's name before they were reunited with their Primarch (the Word Bearers were called the Imperial Heralds). Aaron does a great job of making you cheer for the "bad guy", you know the betrayal that will happen and yet you can find yourself agreeing with it in may cases. Not to mention all the background and understanding of how and why the Word Bearers began setting the stage for the Horus Heresy.
If your a fan of the Heresy novels you definitely need to pick this book up. If your a fan of just good fiction, I would totally recommend this novel as it manages to encompass so much of the Heresy you don't really need to have read the other ones. I can't wait to read the next instalment, Prospero Burns.
Posted by Big_Willie at 3:16 PM