As a follow up to the Tyranid Tactica articles I have been writing I decided I would do a battle report to show off certain lists in action. A couple of weeks ago I played my friend Nick using a "Come From All Sides" type army list. I decided to try out a couple things I have never used in this edition of the codex. The biggest one is a Flying Hive Tyrant (although, I don't have one so he is represented by my regular hand to hand Tyrant on the board). I basically made up this army a 100% for fun (in regards to my choices) with the overall theme of assaulting my opponents on my terms instead of just footslogging across the board and getting shot. So, without further adieu here is the report.

Here are the two lists in the battle:

Set Up:
Mission was Dawn of War and the objective was capture and control (5 objectives). I won the roll off to see who went first and I opted to go second. The Iron Warriors set up two units of Chaos mairnes each with a Lascannon, Plasma Gun, Aspiring Champ w/ Power weapons and a chaos icon.

I set up a Tervigon and a unit of Termagants (20) in a building near one of the objectives. The only unit visible was the Termagant unit (Tervigon was completely blocked). 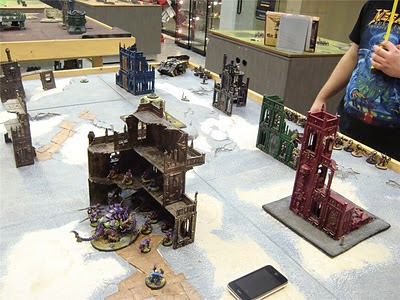 Turn 1: The Iron Warriors either walked/drove everything onto the table from his board edge, keeping most things closer to the center of the table. The Land Raider with Abbadon came on in the center of his army while the huge unit of 9 Tzeentch Terminator Champions came on his right flank. His shooting phase consisted of gunning down a couple of Termagants in the building near the objective.

I walked on the Hive Guard and the Mawloc. I walked the Mawloc behind a building so he couldnt be shot at, same with the Hive Guard. I opted not to Burrow the Mawloc as it would be pretty much certain death on turn 2 with Abbadon waiting for him. I cast Domination from the Tervigon to get an 18" synapse bubble. The Tervigon also created a new unit of 9 to run towards the middle objective with the hope of either drawing out some of his hand to hand combat units or pulling some shooting away from the Tevigon and Gants in the building. 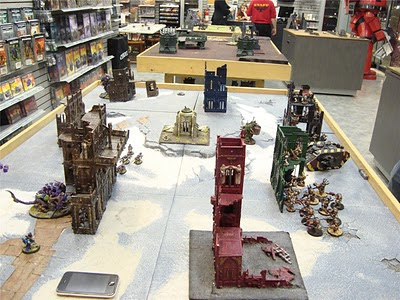 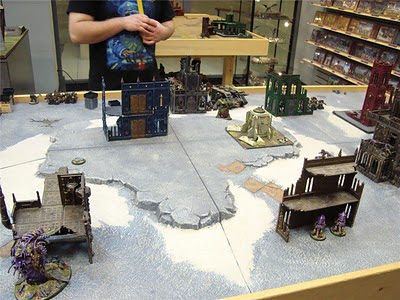 Turn 2: The Iron Warriors moved up the Raider with Abbadon in it and took some more shots at the Termagants running towards the middle objective. He also moved the Tzeentch Terminators further forward and took some more pot shots from the Gants in the building. His Demon Prince of Nurgle moved up in the left building on the hill near the 3 objectives in the middle of the board. After all the shooting was done I lost about 3 gants from the new squad in the middle and about 7 from the original 20 in the building.

This is the turn where the fun begins for the Nids Everything came in except the Raveners and the Zoans (which were the only one I WANTED to come in to blow up the raider). The Stealers came in from the right flank, near the Tzeentch Terminators. I decided based on how the board was set up that I was going to overload one flank to try and make too many things for him to attack at once. So Harpy, Tyrgon Prime, Winged Tyrant, Stealers and Deathleaper all showed up on the right flank. I was hoping to Paroxysm the Terminators but alas, scattered too far away. I basically pumped everything into the terminator unit. So 3 large blasts (from Tervigon/Harpy - all hit) and a large unit of termagants took down 3 of them. I also created another unit of Termagants with the Tervigon and he crapped out (made 8). Those 8 moved onto the objective near my board edge. The 1st created unit moved onto the middle objective (hoping to pull his Demon Prince into the center of the board). I also burrowed the Mawloc at the start of the turn. 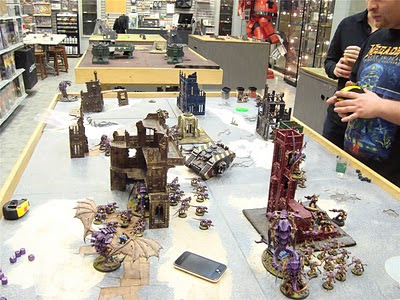 Turn 3:
The Iron Warriors decided of all the threats on the one flank that came in, it was the Stealers that needed to die (being deadly, scoring and visible). He moved the Terminators into the building as he new nothing in my army other then the Deathleaper had Frag Grenades. He pumped the entire terminator unit into my stealers only managing to kill 2 of them and he also put a wound on the Broodlord. The Demon Prince moved up as hoped and completely mashed the small Termagant unit holding the middle objective. Abbadon finally got into the frey and hopped out of the Raider and charged (and decimating) the original Termagant unit. The Iron Warriors managed to kill 2 of my 5 troop units. He also managed to put a wound on the Harpy with his Havocs.

I started the turn off by using the Deathleaper's phermone trail to auto hit with the Mawloc on the Terminators, only killing 2 of them due to their 4+ invuln save. Since my reserve roll was at 2+ (Deathleaper and Hive Commander) both my Raveners and Zoans came in. I brought them in on the other side of the board, hoping to draw the demon prince towards the Raveners (as the Shadow in the Warp will hopefully shut down warptime). The Hive Tyrant moves forward to Paroxysm the Terminators (which he does, so they are now WS/BS 1). I also moved the Trygon prime up hoping to leap frog the Terminators into the unit of Chaos Marines behind them. I took a bunch of shots at the Abbadons unit (2 cluster spines and a Stranglethorn Cannon) doing minimal damage. The Hive Guard managed to take 2 wounds off of the Demon Prince and the Zoans kill 2 of the Chaos Marines on the left flank. In the assault phase things really heat up. The Trygon gets 7 wounds on the Chaos Marine unit he charged, easily breaking them and running them off the board. The multi charge of the Deathleaper, Hive Tyrant and Genestealers kill all but 1 of the Tzeentch Terminators leading them to break and they were caught by the Deathleaper and killed. Basically Paroxsym won that combat as the terminators were hitting on 5's. 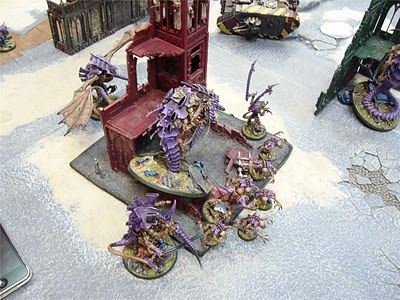 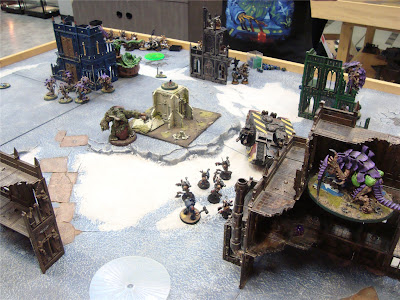 Turn 4
Last turn was a very deadly turn for The Iron Warriors as his entire left flank was crumbling beneath him. He still had 2 scoring units so all was not lost. Abbadon and his unit head towards the Hive Guard and the Demon Prince heads over to the Zoans. After watching the Trygon Prime effortlessly kill 10 marines in hand to hand the name of the game became putting him down. So the Havocs, Raider and the last unit of Chaos Marines shot everything they had and only managed to bring he down to 3 wounds (he had cover amazingly). Abbadon single handedly kills the two hive guard and the demon prince kills a Zoan and almost kills the pod due to overkill as he multi charged them.

At this point in the game my only thought is covering the objectives so I burrow my Mawloc and put my Deathleaper back into deepstrike. The Trygon rushes forward towards the Havocs in the lower building and the Stealers move forward to capture one of the objectives in my opponents deployment zone. I also move the last termagant unit onto another objective. My Raveners move around the building with the intention of helping the Zoans out. My Harpy Moves forward and charges the Raider since it didnt move (only glances, does nothing) and the Hive Tyrant is out of charge range. The Trygon just walks through the Havocs, doing 6 wounds but takes 2 in return (as he charged into cover) leaving him with 1 as he breaks the unit leaving him to the mercy of the last Chaos Marine squad in the building. The Demon Prince casts warptime but rolls perils due to Shadow in the Warp and drops himself to one wound (the hive guard did a couple earlier in the game). He does a minor amount of damage on the Raveners and the Raveners in turn score 6 rending wounds killing him. 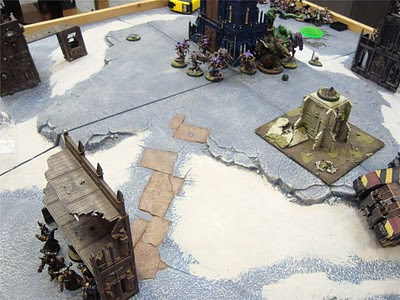 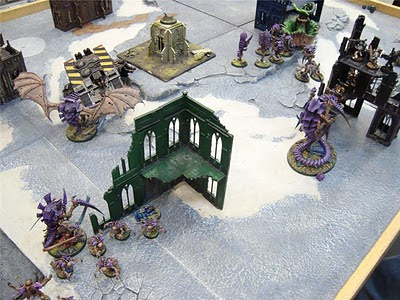 Turn 5
Things at this point are winding down for The Iron Warriors and he starts focusing on the objectives. He tries to tank shock the stealers off of the objective near his board edge, only to roll a '1' immobilizing the Raider. Abbadon and his unit starts running towards the Termagants holding my lone objective. His last chaos unit fails to put a wound on the Trygon Prime (failed to wound on the plasma gun, rolled a 1 to hit with the lascannon and I made my saves against the bolters).

The Mawloc misses Abbadon's unit and scatters 8" away. The Deathleaper appears in the middle of the board to contest the middle objective in case Abbadon turns around. I put a couple more wounds on the Bezerkers with the Harpy and Tervigon. My Zoans totally wiff on the Raider and the Hive Tyrant fails to do any damage in hand to hand. The Trygon licks his chops while staring up at the last Marine unit. The Chaos marines fail to take off his last wound and the Trygon kills 5 of them, breaking the unit. 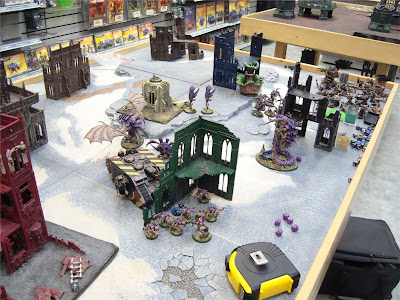 Turn 6
The game continues as I roll a "6" for random game length. At this point all that is left for The Iron Warriors army is his immobilized Raider and the Bezerkers with Abbadon. The raider opens up on the Stealers and they go to ground so it does no damage. Abbadon gets into charge range of the objective in my deployment zone.

I re-burrow the mawloc and put the Deathleaper back into deepstrike in case the game goes to turn 7. I blow up the raider with the Zoans and I fly the Tyrant over the building and Paroxysm Abbadon and his cronies. I also cast Catalyst on the last
Termagant unit. One thing to note as well was my Tervigon was actually on TOP of that building he is standing beside. He was just really wobbly up there so we put him at the base of it :) 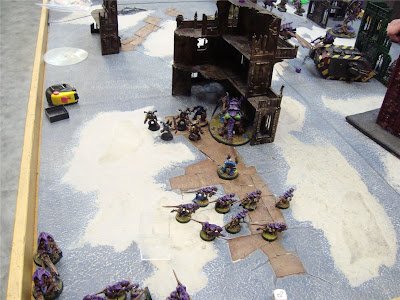 Turn 7
The game keeps going as I roll a "4". Despite being WS/BS 1 Abbadon and the 4 Zerkers manage to easily wipe out the Termagants and putting them on the last objective now tying the game.

I try to deep strike onto Abbadon but miss...again (huge miss too lol). The Deathleaper also comes in contesting the last objective. My Flying Tyrant Paroxysms Abbadon and the Zerkers. Abbadon still does a wound to the Tyrant as the Tyrant charges him and then the Tyrant kills all the Zerkers. 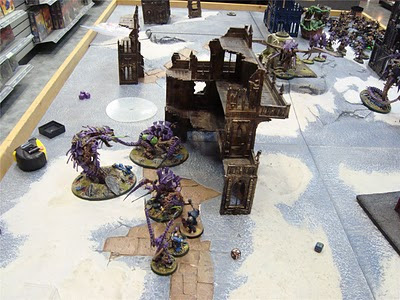 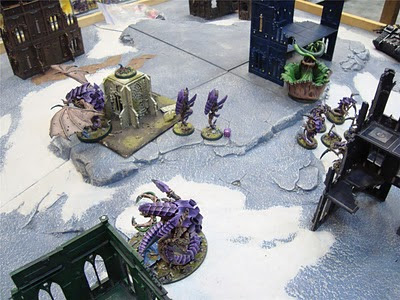 Tyranids win with 1 objective leaving only Abbadon alive with 2 wounds. I still had my stealers, Tyrant, Mawloc, Tyrgon, Zoans, Tervigon, Harpy and the Deathleaper. Great game, super fun army and Nick (the Iron Warriors Player) was great to play
against 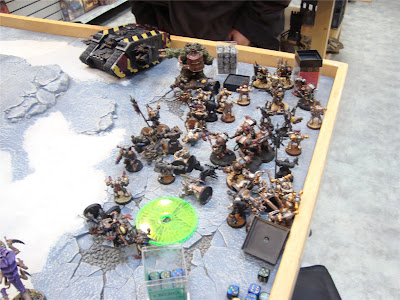 Tyranid Player of the Match: Trygon Prime. He killed 27 marines in total (this is including breaking them). Not recognizing the threat he posed right off the bat basically cost the Iron Warriors the game as he ate 2 of his 3 troops.

Chaos Player of the Match: Abbadon as he was the only one to actually do anything. He killed about 20 Termagants and 2 Hive Guard, not too much, but its still 3 kill points

I figured when I took this army that it would just be a "fun, casual" army but it ended up playing really well and was most importantly really fun to play
Posted by Ghoulio at 9:10 AM

Really enjoying your articles and pictures. Just started up my own blog, mentioned your articles as inspiring. Nice to see someone playing without the template netlist, and your painting work is phenomenal.

You can find me at Men With Toy Soldiers,