40k Skirmish 2011 Round 4 Space Wolves vs Imperial Guard in "First Stop No mans land then the Enemies Base!" 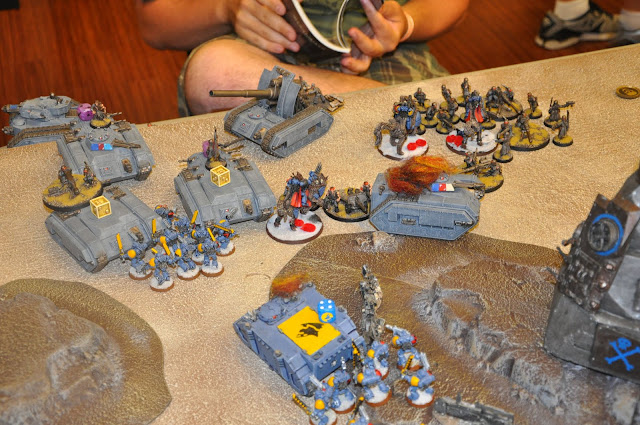 Wolves Make it into the guard line and start tearing them to pieces (finally ;) )
Round 4 was objective based with one objective in each deployment zone and one in the centre.  I played against Chris who is a very skilled player and veteran of Adepticon.  He had just lost against Will Paul and I think had he won that game he would have been playing for the top spot in the tournament.  His list looked something like this:
HQ
Command Squad with Plasma and banner
Elites
Psyker Battle squad in Chimera
Troops
30 x man squad with autocannons, power swords and a commisar
10 x veterans with Melta in Chimera
10 x veterans with Meltas and Lascannon in Chimera
Heavy Support
Plasma Leman Russ
Manticore
Basilisk
SET UP 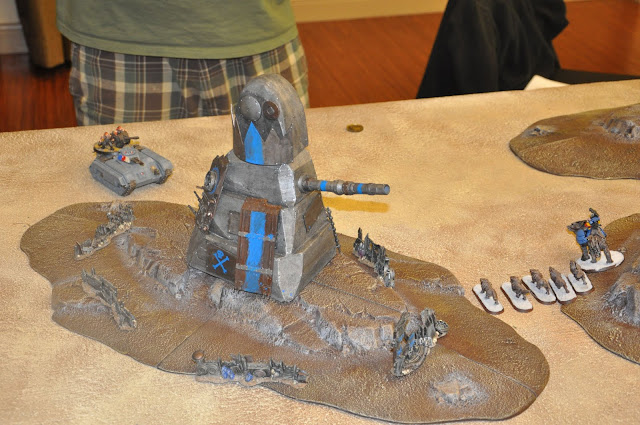 The Wolves prepare to make a move against the lone guard squad and Chimera. 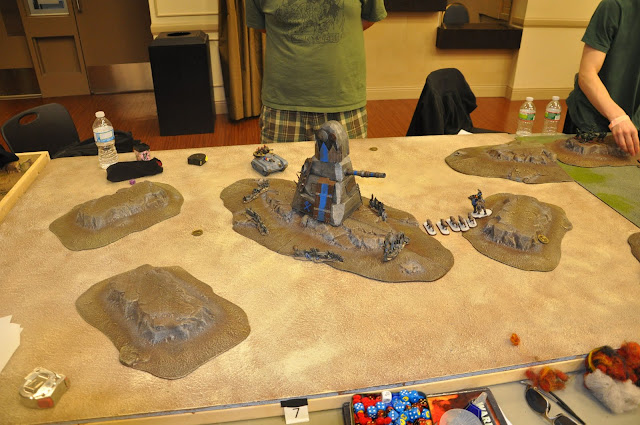 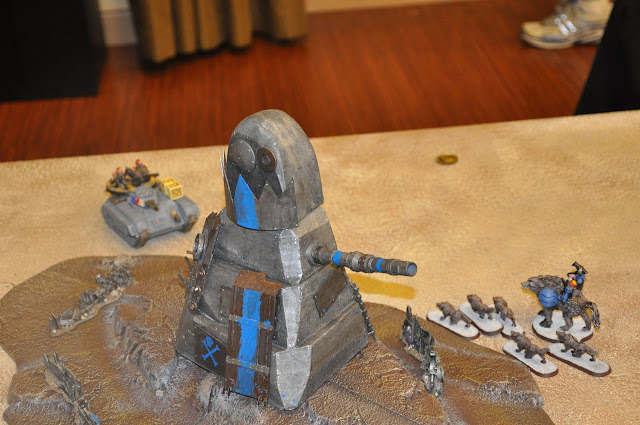 The Wolf lord and his wolves move towards the IG Chimera. 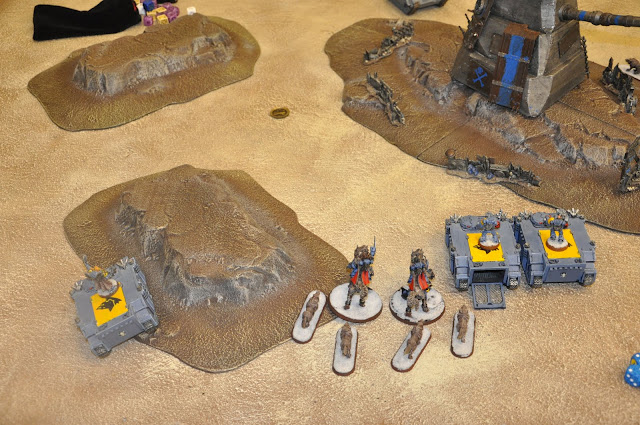 The remainder of the force moves up to support their Lord. 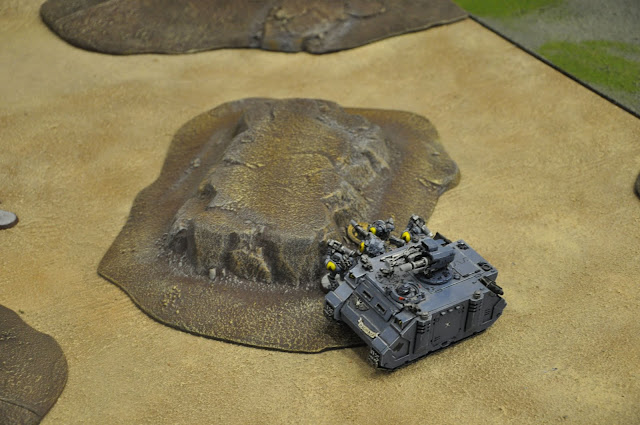 The Long Fangs take position on a hill to provide covering fire. 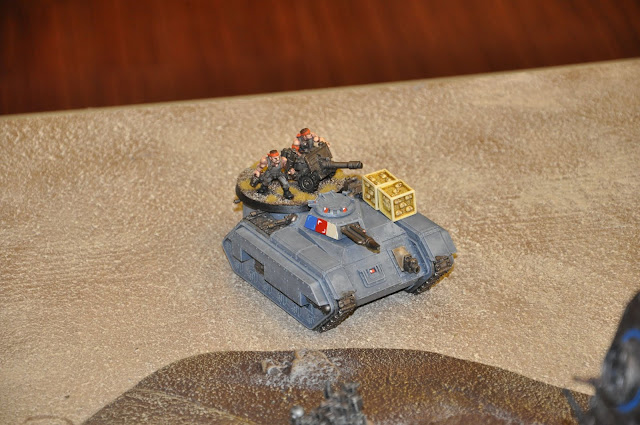 The lone Chimera isn't to much worse for wear. 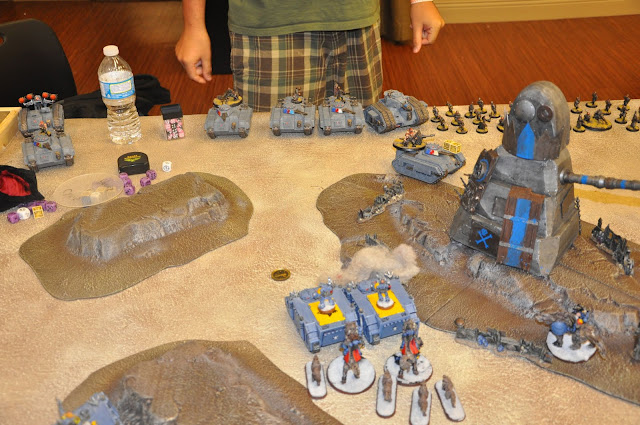 The IG take the board in force deploying on mass along to back table edge. 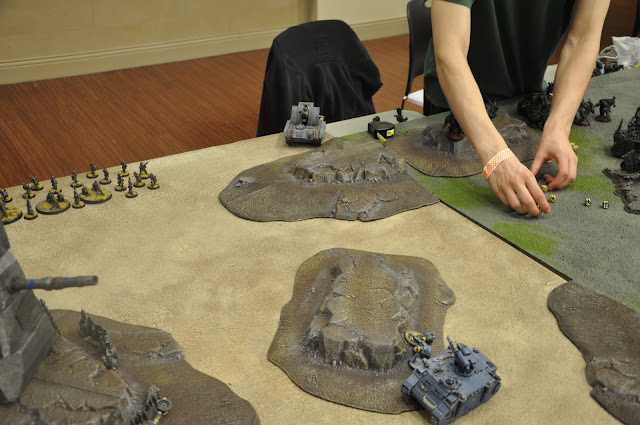 The Heavy Arty takes up both corners to ensure they both won't be taken out.
TURN 2 - 3
A lot of shooting and little else while the Wolves tried to get close.  I didn't take as many pictures as I should have and I asked a lot of questions because Chris is a much better and faster player than I am.  In the end we ran out of time on turn 4 with us contesting the same objective.

Finally the Wolves get dug in!
If there was more time the game could have gone either way but as it was we ran out of time and called in a draw.  There were several things that didn't make sense to me from a game mechanics perspective so I think I may stick with Flames of War for a while because it just makes sense to me.  I love the 40k universe, the models and all the fluff but I think I'll keep the games to a minimum.
Posted by Big_Willie at 5:51 PM

Nice set of battle reports. I was wondering which rules didnt make sense to you? (there are a bunch that don't make sense to me, just wanted to see if they were the same :P)

@ Ghoulio let me see here, these are a few and just off the top of my head.

I want to be able to measure all the time! It's the year 40,000 and I don't have something on the battlefield that will tell me before I pull the trigger is an enemy is in range!!!

Consolidating and not being able to contact new enemies. I know why they did it but something just doesn't seem right about it.

Template weapons not being centred over their target, ie the centre of the template is centred on the base. It seems like templates are the only weapon where you can "kind of shoot" at multiple things.

Charging with a large based single model you can only contact a unit even if you base and moving in the most direct manner will let you touch 2 units.

Firing indirectly you can place the template anywhere even places you can't see (or anyone in your army for that matter) and there is no requirement for someone to spot where the rounds are going. Couple that with my earlier comment on placing templates (ie if you trying to hit a Rhino you aim for centre of mass of the Rhino and not the edge where you can then also hit something else).

Night fighting, I mean really it's the 41st millennium and they can't see in the dark? Really?

Independent Character are part of a unit, the unit gets shot to death and only the IC is left, when does he become an IC again? In the shooting phase or as soon as he's the only guy left? If it isn't right away then you wouldn't be able to shoot him, as he is the only model left but can't can't target him and you can't charge him because it was a different unit. Just a very mess set up.

That's all I can think of for now. I figure that most of it could be changed but I'm not sure about game balance. I'm working on some mechanics that would make it better but haven't really decided which will work the best.

Yeah, I can totally see what you are saying on all your points and I agree almost all of them. Like all editions of 40k there is just so much "Grey Area" and people, especially in tournaments, will push those limits to the breaking point (like hitting 2+ units with a single flamer just because they hit 1 guy in the target unit).

The only one you listed that doesn't bother me is not being able to consolidate into nearby units and I USED to play Tyranids. It really makes the game a lot more balanced. I still remember the days of 3rd ed Blood Angels being able to move 12", get out 2" assault, kill the target unit, then sweeping advance up to 12" right into the next unit. Just broke the game.

As far as the other stuff I would LOVE to see that sort of stuff ironed out. Things like blast templates, who you can charge, IC rules, true line of sight that doesn't take into account area terrain properly, etc. Pre-measuring should also 100% be added to the game as well (they did that for Fantasy and people LOVE it).

For me I just find the game mind-numbingly stale right now. Due to GW's massive push on Marines for the downturn of the economy (ie how can we still make money when people aren't buying stuff) going to tournaments means just figuring out which Marine book you will be fighting, with everyone just switching to the newest one regardless of how their models are painted (like everyone plays BA for example in my area).

In my opinion this game needs a huge shake up in play style, like Fantasy just went through, to make things fresh again as well as focusing on Xenos books as well as Chaos so the game is more balanced. As I have said before the only reason I even play 40k at all anymore is because they released the Dark Eldar the way they did. If that didn't happen I would of dropped this game a year ago as my Tyranids are in our storage unit and I am not bringing them out again till they get a MASSIVE Errata/FAQ revision or a new codex. Flames of War looks awesome though and if you are around over Christmas we should get a game in :)