So, now that the legs are finished its time to start on the majority of this model, and that is his upper body. There are 4 major pieces that are put together to make his upper body and that is the torso, his arms and the giant rock formation on his back. All 3 pieces (arms, rocks) took a significant amount of work to get into place including filing down joints and a huge amount of green stuff.

So, naturally a piece this large has to be broken down into a bunch of stages for painting. The primary stage is his skin as it will be about 5-6 levels of high lighting plus another level of shading. The first two layers were done by doing a heavy dry brush over a dark blue with the largest brush I had. Then after that I went through and did a bunch of purple washing in the recesses to add some depth and shading (pics below). 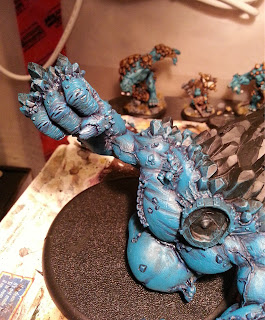 After this stage I started building up layers by painting on all the details by hand eventually adding Elf Flesh to get a warmer look to the final level of high lighting. 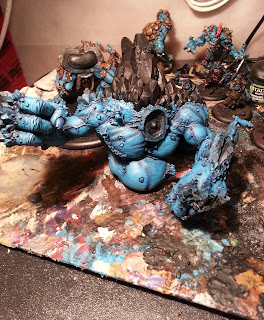 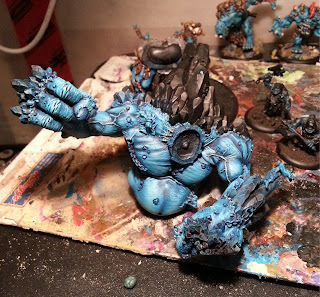 Next Up: The second half of the upper body of this guy. Then the head and base. After that its just details (little whelps and chains) then finished! Cant Wait!