Something Gargantuan Comes This Way...

After drooling over the Mountain King since his release I FINALLY managed to pick this guy up. This model is the #1 thing that got me into Warmachine. I have always loved his form, size, pretty much everything about him. It's also very interesting after picking up the Wraithknight to get a kit that is pretty much the same size and scale, but from another company and being able to see the contrast between the two models and the two companies different approaches the used to create their massive minis.


Before I get into talking about the Mountain King and Wraithknight I wanted to post a couple "Size Comparison Shots" just to give you an idea on how large this mini actually is. He is almost as tall as the Wraithknight even though he is completely hunched over and has about 2-3 times as much mass. 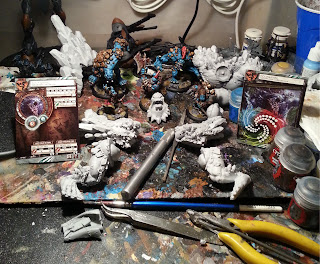 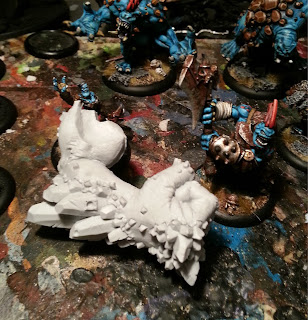 As you can see his head is about the size of one of my Warcaster and his arms are about twice the size of any of my warbeasts. The only pieces I took pictures of were the resin and by that I mean actual resin, not their shit resin/plastic hybrid stuff they use for their normal models which is the worst material I have ever worked with...like worse then Finecast. He also comes with a slew of metal detail pieces like extra chains and a bunch of Whelps hanging off him in different places.

Pros: There are a lot of things to like with this figure. As I mentioned before the form and design of this model are both fantastic. I love everything about both of those aspects, even his posing is great. He has such a great sense of FUN plus he has so many fantastic little details. Every time you look at him you notice something new. The actual resin material he is made out of is really nice to work with as well. It's a really nice middle ground between Forgeworld and Finecast. It's soft enough to easily shave/file down to make pieces fit but its no where near as brittle as Finecast.

Cons: Sorry but I have to swear here...this guy is a fucking nightmare to put together lol. All the pieces that make up his main body (so the torso, both arms and the rock formation on his back) don't even come close to fitting properly. I spent roughly 5+ hours just filing down his joints, gluing the pieces in place then green stuffing the joints. The green stuff work on the pics below took roughly 3-4 hours. I spent a massive amount of time trying to make sure the transitions were as smooth as I could get them (think they turned out well). This is the one area where GW kits are light years ahead of the Warmachine ones is the quality of the material they are made out of (specifically plastic) and how easy their kits are to put together. 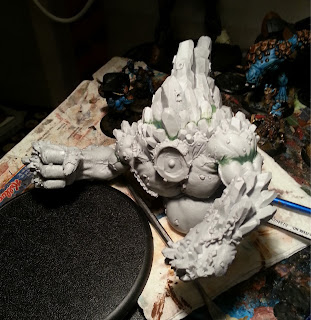 Pros: Like all GW plastic kits he is just super straight forward to put together. I think the total building time was around 3 hours from start to finish which is pretty amazing considering his size. I also really like how he looks as he is a very well designed kit with all the weapon options thrown on the sprue with 2 sets of arms. Makes magnatizing him very easy if you have a bit of patience for it (spoilers...I didn't).

Cons: While the kit is very well designed I just find it very...stale. I am sure with some effort you could easily repose him doing something awesome to make him more interesting I just find myself not "feeling him" if that makes any sense. Even though I now have both totally built I just find myself completely drawn to the Mountain King with almost zero interest to keep working on the Knight (don't worry, I have done a bunch of work on him and over the next few weeks will be posting WIP shots). 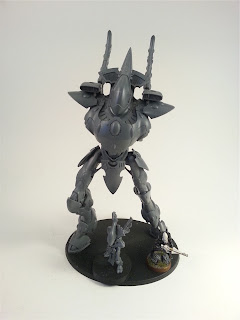 Conclusion: While the overall "Product/Quality" of the Wraithknight is vastly higher then the Mountain King due to the quality of the material it's made out of and vast array of wonderful options included in the kit, I find I like the Mountain King way more. Despite how long and difficult it was to fully build the Mountain King I never found it to be a chore and I was having fun the entire time. Now that I am painting them both I am finding I just can't put the MK down while I have to force myself to paint the Wraithknight.

Next Up: The coming weeks are mostly going to be taken up of WIP shots of both the MK and Wraithknight. I will also be doing some more re-basing of the Eldar as well. Should be fun!
Posted by Ghoulio at 9:28 AM

That's a pretty standard comparison of GW vs PP (and other manufacturer's) models though... I tend to find most GW models ARE very static and boring. It's just EXTRA unfortunate when you're spending $150-200 for GW's newest line.