Play by Play of XMas Battle

Now that I'm back at home, here are some of the pics from our XMas fun... 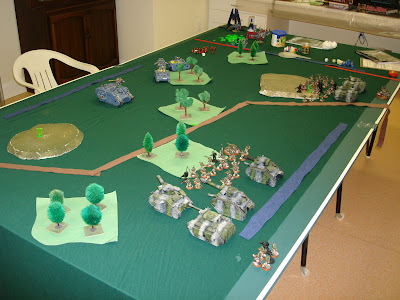 The first game. This was a very infantry heavy army with armored support taking on a relatively small Space Wolf army. 1500 pts and I was more or less taking what I have back here in California, except with some commisars and power weapons added in to give the units more bite. Also, 2 platoons, with the 2 squads combined to give them some staying power....
Not really sure what the SW took. A huge dude, a Land Raider with a Mech Priest, and 2 regular squads in rhinos. Perhaps that would explain why what happened next happened... 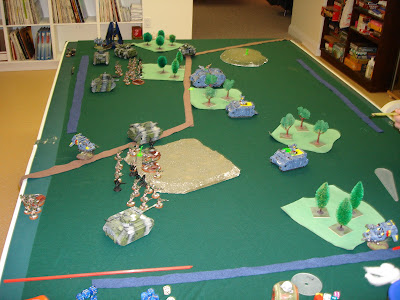 Other side of the battlefield. The guard deploy out of sight with only the lascannons poking out trying to nuke rhinos who bear down on them with speeder support. 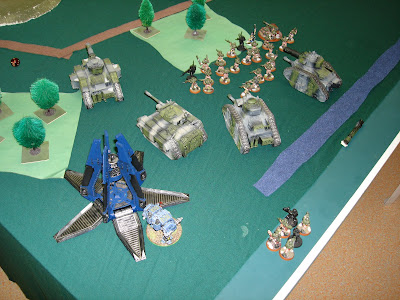 Things started going wrong when his drop pod dropped in next to my armored flank. The other flank was intended as a holding flank until I realized that basically all I could do was sit and try to shoot his vehicles before he assaulted me. 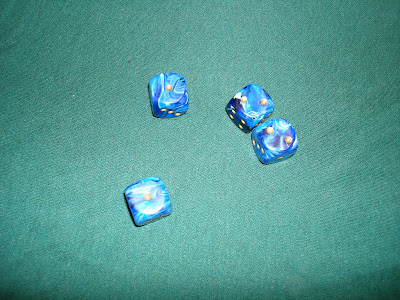 This might also help to explain why things went the way they did. I did indeed penetrate several times throughout the game, but my damage rolls looked like this.... every time... Even with lots of guns, you can only really do so much I suppose. And we were using "Bring it Down" to maximize the lascannon fire too! 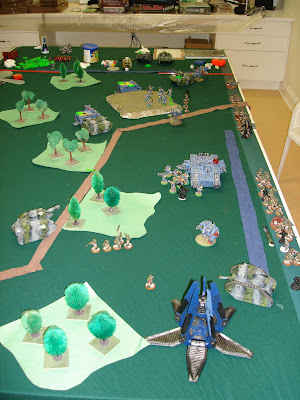 The end of the first battle. Technically my platoon leader is making a break for the other table edge to get the objective, but they'll get charged eventually and run down, so we called it for now, and decided to try a totally different build. Willie built this one for me since he knows WAY more about IG than I do and so would have a better idea of what can work against SW. 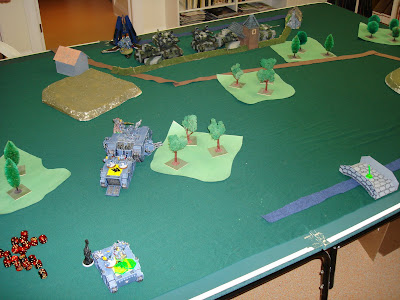 This force was all armored. That's right. Only vets in chims, and tank and AA support. Great looking models too. This has prompted me to start painting the rest of my chims. At the very least to give them a bit more staying power. 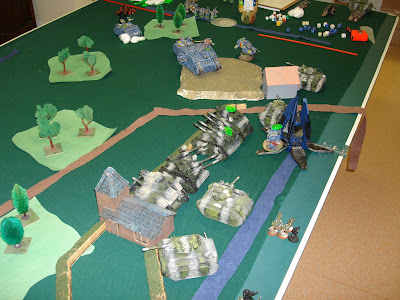 Once again the drop pod comes in, but doesn't do a lot. All guns either train on the rhinos or the dreadnaught since I'm finally realized shooting at a land raider is basically a waste of shots. 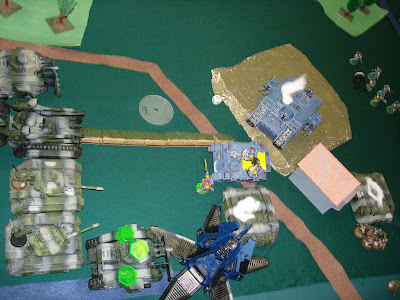 The SW breach the wall, have jumped out to assault, destroyed one squad, but got shot to pieces by an awful lot of guns pointed directly at them. The vets also had carapace armor so that they could survive bolter rounds which I think may be key against SM. Of course they still have to survive close combat, but hey! 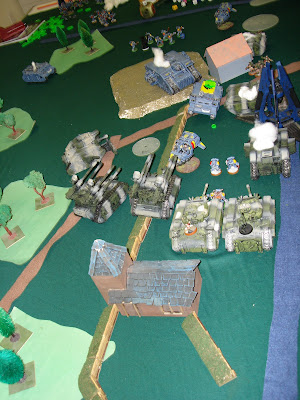 The end of the battle. We considered a draw/minor victory for the SW since my objective was a senior officer in a chim and it didn't seem sporting that he could just drive away. The walls were breached anyway, but we still did have quite a lot of guns (even go that pesky landraider) so could have gone either way, but I suspect that my shooting skills would have let me down again! In any case, great to have 2 games in over XMas, and lots of food for thought regarding how my army should look for the next tourney on the Hornet.
Posted by greedo at 6:10 PM

Two very cool battle reports there with some lovely armies. Thanks for sharing :)